Georgians Have Now Been Protesting Russian Interference for a Week. Here's Why

Protesters waive the Georgian and American flags during a rally in Tbilisi, on June 24, 2019.
Vano Shlamov —AFP/Getty Images
By Madeline Roache

Thousands of demonstrators have taken to the streets of Georgia’s capital city Tbilisi since June 20 in protest against Russian interference, the largest demonstrations in over seven years.

Shouting “Russia is an occupier” and burning photos of Russian President Vladimir Putin, demonstrators gathered outside the parliament one week ago. In response, riot police fired tear gas and rubber bullets and arrested 300 people. More than 240 people were injured, according to officials, including at least two people who lost their eyesight.

“I remember trying to stop my brother from being hit by a police officer, but I couldn’t see anything because of the gas, then out of nowhere a baton slammed into my face,” Irakli Khvadagiani, who has a large bruise on his eye, tells TIME by Skype. “Police were punching and kicking the crowds. It was scary to see how close they were shooting people with rubber bullets.”

The 31 year-old academic researcher was arrested early on June 21 and taken to holding cell for two days, which was “overloaded with other protestors,” he says.

Here’s what to know about the protests:

How did the demonstrations start?

Protests began after Sergei Gavrilov, a member of Russia’s lower house of parliament, took the chair of an inter-parliamentary session between Orthodox Christian lawmakers on June 20. It angered the opposition, which sees the current Georgian government as overly friendly to Russian interests. “It symbolizes the failure of our government to stand up to Russia, which is still our biggest challenge today,” Khvadagiani says.

Anti-Russian sentiment runs strong among the Georgian population. The two countries have had no formal diplomatic ties since the 2008 war, which lasted five days and killed hundreds of soldiers and civilians on both sides. After crushing Georgia’s army, Russia propped up South Ossetia and Abkhazia as independent states where it stationed permanent military bases. This area makes up one-fifth of Georgian territory. Tbilisi and Western allies have denounced Russia’s actions as “illegal military occupation.”

Why are protestors angry at the government?

Because they see it as being too close to Russia. Since 2012, the government has been led by Georgian Dream, which has sought to restore pragmatic and economic relations with Russia. Last year, on the 10th anniversary of the war, Russian Prime Minister Dmitry Medvedev said that improvements in economic relations and tourism would also ultimately lead to normalization of “political ties and resume full-scale dialogue between Moscow and Tbilisi.”

But closer political relations with Russia are controversial in Georgia. According to a 2018 survey by the Center for Insights in Survey Research, 85% of Georgians consider Russia a “political threat.” Russia has been investing “considerable human and financial resource in attempting to increase its soft power” in Georgia and throughout its neighboring countries, says Precious Chatterje-Doody, a Russia security expert at the University of Manchester.

In the past three years media monitoring analysis in Georgia has expressed concern over the rise in pro-Russian, anti Western disinformation.

How has the government responded to the protests?

On June 24, Bidzina Ivanishvili, the leader of Georgia’s ruling party, Georgian Dream, announced “large-scale political reform” and that next year’s parliamentary elections would be organized in a proportional representation system. Opposition parties argue the single-mandate races favor the ruling party and say that Ivanishvili, Georgia’s richest man, is subordinate to Russia.

How has Russia responded?

Putin’s spokesman Dmitry Peskov called the Tbilisi protests “Russophobic hysteria” and ordered a ban on Russian flights to Georgia, effective from July 8. Russia’s transportation ministry also banned Georgian airlines from flying to Russia, citing their debts and safety issues. Speaking to reporters on Monday, Peskov said the flight ban was to protect the safety of Russian tourists and that restrictions would be lifted, “once Georgia returns to a non-Russophobic vector.”

That same day, the Russian trading standards body, Rospotrebnadzor, said in a statement it was introducing the tighter checks on wine imports from Georgia, the Russian market for which make up 70% of Georgia’s exports, because of quality concerns. “Of course not a coincidence. It’s punitive. A way of needling at Georgia,” says James Nixey, head of the Russia and Eurasia program at thinktank Chatham House.

Peskov denied any link to the political row. But Moscow previously placed a ban on wine imports, also in the name of public safety, as Georgia prepared to sign E.U. agreements in 2006.

Oxford University professor Macfarlane says, “Russia is uncomfortable with its immediate neighbours turning Westwards and trying to make their own choices on economic and security arrangements. It has repeatedly shown its willingness to resist that direction and to punish those neighbours who don’t get the message.” 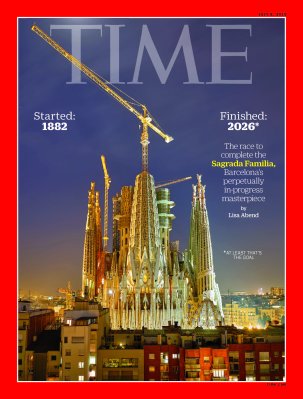 Inside Barcelona's Unfinished Masterpiece
Next Up: Editor's Pick