By Lissandra Villa and Madeleine Joung

When moderator Chuck Todd asked Elizabeth Warren if she has a plan to deal with Senate Majority Leader Mitch McConnell the same way that she has plans for free college and better health care, her answer was short.

“I do,” she said, pausing a beat as the crowd applauded.

But the stark reality is that neither the Massachusetts senator or any of the others on stage with her Wednesday night had a convincing answer to the question of how to handle the top Republican in Congress.

Warren evaded the question at first by talking about a solution that will largely be out of her control: Making McConnell the minority leader, and not the head of the Senate.

“No. 1, sure, I want to see us get a Democratic majority in the Senate,” Warren said. “But short of a Democratic majority in the Senate you better understand, the fight still goes on. It starts in the White House and it means that everybody we energize in 2020 stays on the frontlines come January 2021. We have to push from the outside, have leadership from the inside, and make this Congress reflect the will of the people.”‘

Every 2020 Democratic contender hopes for a Senate majority, of course. But the map for Democrats in the Senate next year is a difficult one. Many are skeptical whether they’ll be able to make significant if any gains and are focusing their energy on winning the White House.

In fact, several of the 2020 candidates had been considered potential Senate candidates before they declared their intentions to run against Trump, including O’Rourke, Montana Gov. Steve Bullock and former Colorado Gov. John Hickenlooper.

For this part, McConnell has built a reputation as a GOP leader ruthlessly willing to do whatever it takes to advance conservative interests, regardless of what the public at large thinks about an issue. If Republicans held the Senate, he would in fact be a huge obstacle for a hypothetical Democratic president.

When asked about McConnell, New Jersey Sen. Cory Booker pointed to bipartisan legislation on criminal justice reform that he led as an example of how Republicans and Democrats can work together in a split government.

“When I got to the Senate, people told me we could not get a comprehensive criminal justice reform bill done. As my colleagues in the Senate know, I fought on that bill from the day I got to the Senate, built coalitions across the aisle. And today we passed the First Step Act. It’s not as far as I want to go, but thousands of people will be liberated,” Booker said. “I have taken on tough problems people said we cannot achieve. And I have been able to get things accomplished.”

But unlike criminal justice reform, some of the major issues Democrats are likely to want to tackle if they take the White House — like health care and climate change — don’t have a lot of bipartisan consensus.

Former Maryland Rep. John Delaney attempted to hew closer to a center lane in his answer, but again was unable to articulate specifically why he thought McConnell would “conform” to working in a bipartisan style.

“I believe we need to operate in a bipartisan manner. Listen, I’ll sign into law bills that come to the White House that are passed on a party-line basis, absolutely,” Delaney said. “But all the big transformative things we’ve ever done in this country’s history have happened when huge majorities of the American people get behind them, which is why we need real solutions, not impossible promises.”

In McConnell-world, the segment was seen as a win for McConnell.

“The winner of the 2nd half of the debate was Mitch McConnell in a runaway,” said a source close to McConnell in a text to TIME. “The only downside is that the segment, in which it was painfully obvious that not a single candidate on that stage had a ‘plan’ for dealing with him, is that the FEC might demand it be classified as an in-kind contribution for his re-election.”

A GOP operative also framed the entire debate as helpful to Republicans in 2020.

“The ideas you saw Democrats endorse tonight ensure Mitch McConnell will continue to be the biggest impediment to a socialist agenda,” said the operative. “Their message was purely progressive catnip, and that’s no way to win back the Senate.” 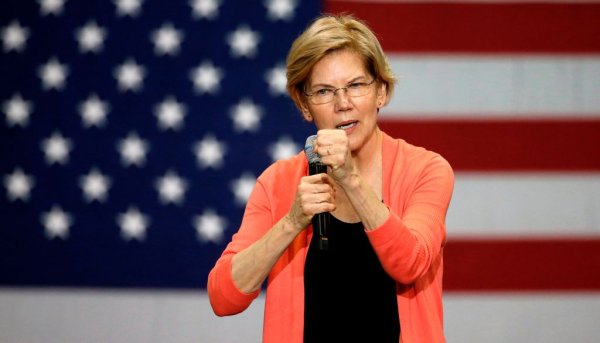 Elizabeth Warren Has a Plan for the Debate
Next Up: Editor's Pick