Here's Everything the Candidates Said at Wednesday's 2020 Democratic Presidential Debate

Americans had their very first chance to see a group of 2020 Democratic hopefuls face off Wednesday night as 10 candidates stood on stage together in Miami during the first presidential debate of the long election cycle. A second group of candidates will debate Thursday night, including front-runner Joe Biden.

Massachusetts Sen. Elizabeth Warren, the only candidate on stage polling in double digits, faced off against Sen. Cory Booker, Sen. Amy Klobuchar and a host of other fired-up candidates who debated issues including healthcare, immigration, abortion rights, gun control and the economy during the event hosted by NBC News, MSNBC and Telemundo.

Here is a transcript of their remarks:

Elizabeth Warren gets the first question — on the economy

Sen. Klobuchar is asked if her rivals’ programs are akin to a “magic genie”

Sen. Booker on whether he would support breaking up large tech companies — and Warren’s response

Rep. Ryan and Sen. Warren on whether manufacturing jobs can ever come back

Sen. Klobuchar hits back at Gov. Inslee over abortion comments

Castro and Sen. Warren also speak out on abortion

Sen. Booker and O’Rourke on the opioid crisis

Castro and other candidates on how they would address undocumented immigrants

Candidates on whether they could get their Supreme Court nominees confirmed

Sen. Warren and others on how they would deal with Mitch McConnell

Gov. Inslee and other candidates on climate change

Candidates on the biggest geopolitical threat to the U.S.

Whether they would pursue impeachment 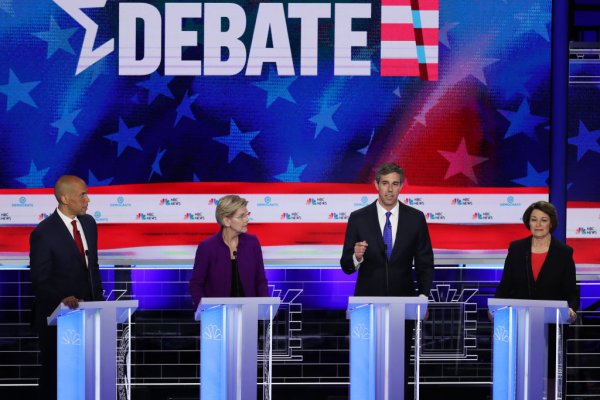 Did Cory Booker Flash Beto O'Rourke Side-Eye After He Started Speaking Spanish at the Debate?
Next Up: Editor's Pick