In a photograph receiving a great deal of attention, a toddler’s arm can be seen draped around her father’s neck as they both lie face down in the Rio Grande River.

Valeria, who was 23-months-old, and her father, Óscar Alberto Martínez Ramírez, drowned trying to cross the border from Mexico into the United States, according to the Associated Press. After trekking from El Salvador, they attempted to swim across, with tragic consequences. The photo, taken on June 24 by Julia Le Duc, has been shared widely by news outlets and on social media, and has incited a debate about its use. There has been international outrage from migrant advocates who argue that such a shocking photo will galvanize action and from those who consider sharing the photo unethical and exploitative.

For an activist like Fernando Garcia, director of the Border Network for Human Rights, the photo is a turning point in the immigration debate and he compared it to the photo of drowned Syrian child, Alan Kurdi.

“People have become numbers, they’ve become statistics,” Garcia tells TIME. “People talk about immigrants in the absence of their humanity. As sad as it is, I think we need to show the photo.”

Novelist Luis Alberto Urrea, who has written about migration, called the photo humanizing.

“I have avoided those kinds of photos all my career and in all my books,” Urrea tells TIME. “At a moment like this, maybe this step has to be taken. To me this is the official Stephen Miller portrait.”

View of the bodies of Salvadoran migrant Óscar Martínez Ramírez and his daughter, who drowned while trying to cross the Rio Grande -on their way to the U.S.- in Matamoros, state of Tamaulipas on June 24, 2019.
STR—AFP/Getty Images

But not all agree that publishing the photograph is right. The National Association of Hispanic Journalists (NAHJ) condemned the use of the image, calling the Associated Press’s publication “exploitative.”

“Men, women and children cross the border daily, often escaping terror with hopes of a better life, knowing the peril that awaits them as they attempt to make the long journey to America,” the group said in a statement.

For Luis Hernández, a multimedia journalist at Univision in El Paso, the photographer was doing her job.

“You need to get all the information,” Hernández tells TIME. “Show people that this person had a name, had a history, had context, had loved ones.”

Mark Lubell, executive director of the International Center of Photography said photos like this have had the power to change policy and says it should be published.

In fiscal year 2018, 283 migrant deaths were recorded at the Southwest border, according to U.S. Customs and Border Patrol. 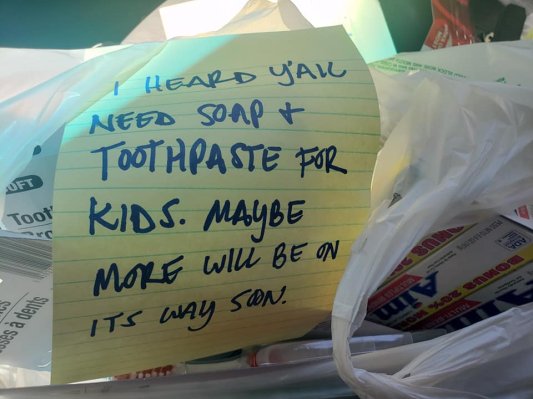 Donations for Children Not Accepted at Detention Facilities
Next Up: Editor's Pick