A temporary facility set up to hold migrants is pictured at a United States Border Patrol Station in Clint, Texas, on June 25, 2019.
PAUL RATJE—AFP/Getty Images
By Mahita Gajanan

Wayfair employees have planned a walkout on Wednesday to protest furniture sales by the online home goods store to a detention facility based along the U.S.-Mexico border.

The planned protest comes after more than 500 employees signed a letter asking company leadership to cancel an order that would provide bedroom furniture to a border detention site in Texas, a Wayfair employee, who declined to be named, tells TIME. Wayfair’s CEO rejected the request.

The letter to executive leadership, a copy of which was provided to TIME, details that the company received an order of more than $200,000 worth of bedroom furniture from BCFS, a non-profit network that contracts with the government. The order would send supplies to Carrizo Springs, Texas, where a facility is reportedly being prepared to “detain up to 3,000 migrant children,” according to the letter. The Washington Post reported earlier this month that a private contractor will manage a temporary influx shelter in Carrizo Springs, where 1,600 migrant children are expected to be housed in a compound where oil field workers used to stay.

“We believe that the current actions of the United States and their contractors at the Southern border do not represent an ethical business partnership Wayfair should choose to be a part of,” the employees’ letter states. “We believe that by selling these (or any) products to BCFS or similar contractors we are enabling [a child rights] violation and are complicit in furthering the inhumane actions of our government.”

In the letter, employees asked that the company stop future business with BCFS and other contractors and enact a code of ethics for business-to-business sales. A representative for BCFS tells TIME in a statement: “We believe youth should sleep in beds with mattresses.”

In response, Wayfair’s executive leadership team thanked the employees in a letter for being “focused on impacting our world in meaningful and important ways.” But speaking as business leaders, the team said, “We also believe in the importance of respecting diversity of thought within our organization and our customer base. No matter how strongly any one of us feels about an issue, it is important to keep in mind that not all employees or customers agree.”

“As a retailer, it is standard practice to fulfill orders for all customers and we believe it is our business to sell to any customer who is acting within the laws of the countries within which we operate,” said the leadership team’s letter, a copy of which was also provided to TIME. A Wayfair representative confirmed to the Boston Globe that a letter was sent in response to the workers’ concerns.

Wayfair representatives did not immediately respond to TIME’s requests for comment.

The border has received renewed national attention in recent days after reports surfaced that more than 300 detained children at a remote Border Patrol station in Clint, Texas, were living in alarming conditions, including with inadequate food, water and access to hygiene. Attorneys monitoring how migrant children are receiving care said older children at the facility were taking care of toddlers and that some children had been detained at the facility for three weeks.

While most of the children were reported to have been moved out of the facility on Monday, government officials said Tuesday that more than 100 kids were transported back to the detention center.

The Wayfair employee who spoke with TIME says the recent news surrounding the treatment of detained migrant children “certainly galvanized many colleagues who wouldn’t have been involved in something like this” before. It is unclear if Wayfair has previously contracted with government agencies that provide furniture to detention facilities.

Following the executive team’s response, the employees decided to plan a walkout. Workers were “disheartened” by the response from leadership, but felt energized about continuing the conversation, the Wayfair employee says.

“We can all make active choices to decide whether or not we are aligning ourselves with these atrocities and these behaviors,” the employee says. “We’re in a time when small things can go a really long way, and we wanted to leverage what little power we have.”

Their efforts quickly gained steam— after going public on Twitter, the @wayfairwalkout account gained nearly 11,000 followers in one day. Rep. Alexandria Ocasio-Cortez, who has called the detention centers concentration camps to loud criticism, tweeted her support of the Wayfair employees. 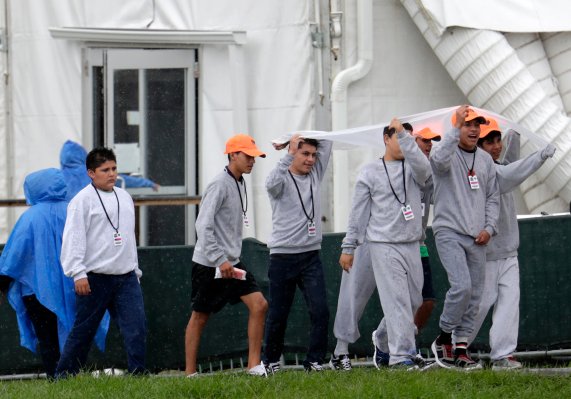 Detaining Migrant Children at U.S. Military Bases Has Been Done Before
Next Up: Editor's Pick