A fire at the largest refinery on the U.S. East Coast sent gasoline prices soaring, threatening to raise pump prices from Delaware to Maine just as American drivers get set to head off on vacation.

Futures jumped 3.9%, the most in more than three months after an explosion and fire Friday at the Philadelphia Energy Solutions oil refinery. Pump prices are likely to rise as the surge filters down to retail stations, reversing a more than 20-cent drop from early May that took the nationwide average down to $2.67 a gallon.

A “very small fire” continued to burn Saturday and the company was seeking to isolate it, although it could burn out soon, according to a statement. Access at the site is limited by damage and instability of the structure, the company said.

The incident could shut in about 4.2 million gallons a day of supply, enough to meet about 2.7% of East Coast demand, according to Bloomberg estimates. To fill the gap, prices would have to increase high enough to attract more supply from Europe of other parts of the U.S.

“Any shortage ahead of the peak of the summer driving season does not bode well for U.S. consumer pocketbooks,” Joe Brusuelas, chief economist at RSM US LLP, said on Twitter.

The complex made up of the Point Breeze and Girard Point plants, can process 335,000 barrels of crude a day. It sends fuel via pipeline and barge to New York and New England, and through pipelines to upstate New York and across Pennsylvania.

The blaze started after a leak in an alkylation unit, used to make high-octane gasoline, triggered explosions after which all the boilers stopped, causing a hard shutdown of the Girard Point section, according to people familiar with the plant’s operations. The Point Breeze plant was already undergoing repairs to its 50,000 barrel-a-day fluid catalytic cracker following a fire in a pump earlier this month.

The fuel shortfall could be made up with inventory draws from the local region in the near term and from imports over the longer-term, according to Andy Lipow, president of Lipow Oil Associates in Houston.

Supplies on the Colonial pipeline destined for other markets could be diverted into Pennsylvania, while it takes about 11 days for a tanker to reach the East Coast from Northwest Europe, according to Lipow. But, he said, “there’s certainly going to be price increases from an initial shortfall.”

Cherice Corley, a PES spokeswoman, said in an emailed statement that all employees were accounted for. The Chemical Safety Board is deploying a four-person team to the site to investigate the fire.

The blast was so large and so hot that it was captured from space in satellite infrared images, the National Weather Service’s Key West office wrote on Twitter.

There have been refining operations for 150 years at the site, which has passed through a series of owners, including Chevron Corp. and Sunoco before being consolidated into Philadelphia Energy Solutions, a partnership formed between The Carlyle Group and Energy Transfer’s Sunoco. PES emerged from bankruptcy last year with $260 million of new financing, with the original partners holding smaller stakes.

In addition to boosting purchases of fuel from Europe, the incident could redirect crude back into the market. About 8 million barrels of foreign crude is en route to Philadelphia, according to shipping fixtures compiled by Bloomberg.

PES is “likely to reoffer at least some of the inbound crude cargoes it has purchased from West Africa and the North Sea if its operations are significantly reduced for a long period of time,” Amrita Sen, chief oil analyst at Energy Aspects Ltd. in London, said in an email. 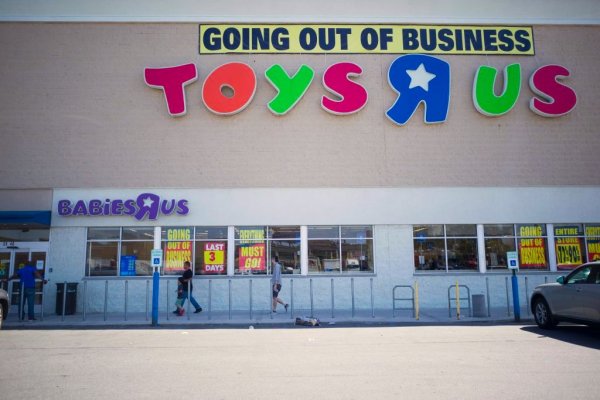 Toys ‘R’ Us, Back From the Dead, Will Reportedly Open U.S. Stores Just in Time for the Holidays
Next Up: Editor's Pick