What Is VAR? Soccer's Video Review Is Making a Mess of the Women's World Cup

When an acronym for instant replay is overshadowing the World Cup, the beautiful game can get ugly, fast.

Unfortunately, that’s exactly what’s happening in France, where every Women’s World Cup match, it seems, is marred by some controversy surrounding VAR, or “video assistant referee.” This technology is supposed to efficiently solve rules disputes, not enrage fans and leave the world’s best soccer players, who’ve worked their whole life to take part in a global mega-event like the World Cup, completely flustered.

Let’s take a closer look at the row over VAR.

VAR is essentially soccer’s instant replay system. On March 3, 2018, the International Football Association Board (IFAB), the top rulemaking body for global soccer, wrote VAR into the laws of the game. IFAB touted this measure as a “historic step for greater fairness in football.”

The guiding philosophy of video review was “minimum interference-maximum benefit,” with aims to eliminate “clear and obvious errors” or “serious missed incidents” with regards to goal calls, penalty decisions, decisions to hit players with red cards after a first infraction, and cases of mistaken identity, i.e. giving a penalty to the wrong player. Sounds reasonable, right? With stakes as high as they are in world soccer, you want to get the call correct.

That same month, FIFA voted to include VAR at last summer’s men’s World Cup in Russia. Top leagues around the world were already experimenting with the system, so many of the men’s players were familiar with VAR going into their tournament. VAR was generally considered a success for the men: according to FIFA, VAR resulted in a 99.3% success rate of correct calls (without VAR, 95% of calls would have been right).

So FIFA approved VAR for the women right away, right?

No, and that’s part of the problem. Rather than just implement a successful innovation for the Women’s World Cup right away, FIFA dragged its feet on approving VAR for the women’s event this summer.

“I think it would be a little bit insulting if we weren’t afforded the same opportunity,” U.S. women’s soccer coach Jill Ellis said of VAR after last summer’s men’s World Cup. “There’s too much at stake to not have it, and I think our game, our passion, our drive, our motivation is at the same level as the men.”

In December, FIFA announced its list of referees and assistant referees for the Women’s World Cup, but made no mention of video refs. FIFA finally approved VAR for the Women’s World Cup on March 15, less than three months before the start of the tournament. So the women didn’t benefit from playing under VAR before its introduction at the world’s most important soccer tournament.

Also, on June 1 — just six days before the start of the Women’s World Cup — IFAB instituted a new rule mandating that goalkeepers must have at least part of one foot on the goal line, instead of both feet, when an opponent takes a penalty shot. Keepers can no longer stand behind the line. In theory, the new rule offers more flexibility for keepers. But introducing it so close to the World Cup, and using VAR to enforce it so strictly, has turned the women’s players into “guinea pigs,” as Chelsea women’s team manager Emma Hayes put it.

What have been some of the biggest VAR controversies at the Women’s World Cup?

Take your pick, really. But Scotland may have the strongest VAR beef. The Scots needed to beat Argentina on June 19 to have any hope of advancing to the Round of 16. Scotland appeared to secure a 3-2 victory when goalkeeper Lee Alexander saved a penalty shot from Florencia Bonsegundo of Argentina in stoppage time. But VAR determined that Alexander moved a few inches off her line before the shot was taken. Bonsegundo scored on the retake, tying the game and sending Scotland home.

Critics — and not just Scotland fans — argued that, in this case, VAR wasn’t correcting a “clear and obvious error” or “serious missed incident.” Keepers have been edging off their lines on penalty shots for years; VAR was starting to nitpick, and at the Women’s World Cup no less. Scottish First Minister Nicola Sturgeon, though a biased observer, captured the sentiments of many when she wrote on Twitter: “I still don’t fully understand how it works, but I understand enough to know that I hate VAR!” The English Premier League will introduce VAR for the first time this upcoming season. But video replay will not be used to scrutinize goalkeeper footwork and take away penalty kick saves.

VAR isn’t just causing headaches on penalty kicks. In Sunday’s France-Brazil quarterfinal, France seemed to go up 1-0 before VAR intervened. Fox rules analyst Christina Unkel made the reasonable point that Brazil goalkeeper Barbara did not have possession of the ball when France’s Valérie Gauvin collided with her on a cross, sending the ball into the net. The refs ruled it a goal on the field. After a more than four minute delay, the call was reversed, seemingly without clear evidence. France survived, pulling out a 2-1 victory with a goal in extra time that, following the United States’ victory over Spain on Monday, set up a much-anticipated quarterfinal showdown between the host nation and the U.S. Friday.

The Americans have benefitted from questionable VAR calls. Against Sweden, Carli Lloyd appeared to be offside on a cross before Tobin Health deflected a ball off Sweden’s Jonna Andersoon, resulting in an own-goal that put the Americans up 2-0 in the second half. After the refs took a look, the goal was allowed to stand. In the U.S.-Spain round of 16 game Monday afternoon, Spain’s Maria Leon was whistled for tripping Rose Lavelle in the box, giving the U.S. a penalty kick late in a 1-1 game. The play didn’t look much like an infraction, but VAR gave the U.S. another break. The call held upon review, and Megan Rapinoe converted her second penalty shot of the game to give the Americans a 2-1 lead it would not relinquish.

What happens with VAR now?

Besides praying that some VAR controversy doesn’t determine who wins the Women’s World Cup final? VAR calls should be determined in a more timely, and consistent, fashion for the rest of the tournament. But protests will likely continue. After two VAR calls went against Cameroon in its 3-0 Round of 16 loss to England, the players were notably upset. Cameroon coach Alain Djeumfa called the decisions a “miscarriage of justice.”

When it comes to the treatment of the world’s best soccer players, a disturbing pattern has formed. VAR for men was deemed a success, but the players had some time to get acclimated to it. The women did not, and had to deal with a rule change for goalkeepers that complicated the whole thing just days before the start of the tournament. Even putting pay disparity aside, this isn’t the only case of women’s players getting the short shrift. The last Women’s World Cup, in Canada in 2015, was held on artificial turf, something that would never happen with the men. This year, the finals of two major regional men’s tournaments, the Gold Cup and 2019 Copa América, take place on July 7 — the same day as the Women’s World Cup final. Such a scheduling conflict would be unimaginable for the men’s World Cup.

Bottom line: VAR’s disastrous rollout this World Cup only adds to the indignities that women have faced in global soccer, even in recent years. 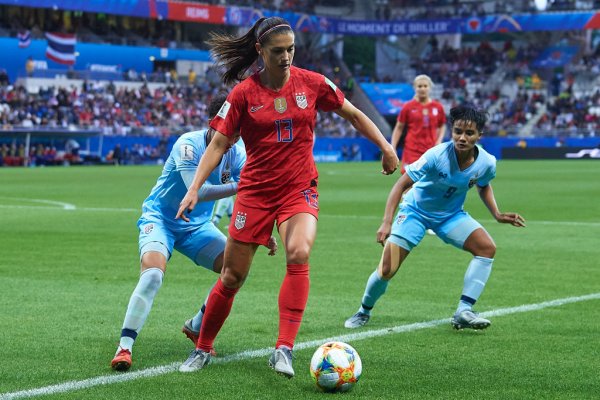