A woman in Houston, Texas, has been arrested and charged with criminally negligent homicide after she allegedly ran over her 3-year-old son in what law enforcement officials have called a game of “chicken.”

Lexus Stagg, 26, was caught on surveillance footage fatally hitting her young son with her car, according to a statement from the Harris County District Attorney’s Office in Texas.

On June 11, she allegedly drove her 2006 Lincoln Navigator forward as her three young children ran towards the front of the SUV. Stagg hit one of her children, trapping him under the right front tire, according to prosecutors. Authorities claim that she subsequently ran over the small child with the SUV’s right rear tire. The child died of his injuries.

Stagg was arrested on Thursday and appeared in probable cause court the following morning. She initially told police that she thought she hit a speed bump when she was driving in reverse, according to prosecutors.

Harris County District Attorney Kim Ogg announced the charges against Stagg on Friday. If convicted, Stagg may face up to 10 years in prison.

“Every parent has an obligation to protect their children, even from themselves,” Ogg said in a statement released by her office. “Cars aren’t toys and playing chicken with your kids isn’t a game.”

“She was in her car and her children were playing in front of her in the parking lot. She put her car into reverse, and drove at least 100 feet,” said Sean Teare, chief of the Vehicular Crimes Division of the Harris County District Attorney’s Office, according to KTRK. “The three kids followed her, followed the car, at which point, the defendant put her car into drive and drove toward her children as they were running toward her. The two older children were able to get out of the way, and tragically, the younger child was not and was run over by two of her tires.”

“You should be playing Peek-A-Boo with a three-year-old instead of forcing him to try and dodge a 5,600 pound deadly weapon,” said Teare in a statement. 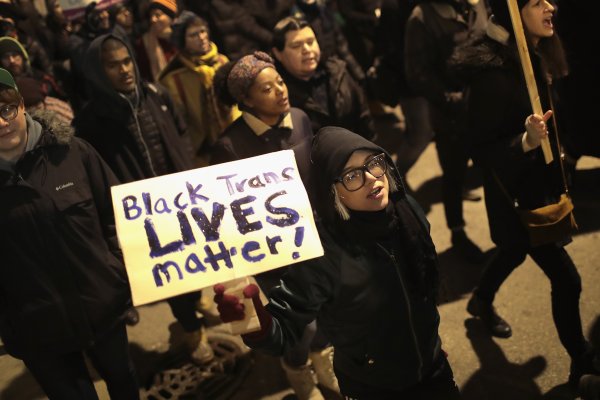 Murders of Black Trans Women Reveal a Crisis
Next Up: Editor's Pick