Inside the Battle to Save Congo From the Ebola Crisis

Outside a brown cement house in the eastern city of Beni in eastern Democratic Republic of the Congo, a government-employed psychologist is telling 19-year-old Merveille Mwenze that her husband has tested positive for Ebola. She’s seven months pregnant and nine months married, with so few possessions she doesn’t even own a chair to sit on and digest the news. Mwenze sways, processing the information, before she wonders aloud if the baby could have the virus too.

Mwenze and her 23-year-old husband, a pastor and community leader, share this home with another family, who watch in concern as a hygienist in protective gear begins the process of decontaminating everything in sight. “He was feeling bad,” Mwenze recalls. “I thought it was malaria. I knew about Ebola but I didn’t think about it in relation to my husband.”

The pastor suffered a fever for several days in early June before going to hospital, where he was immediately isolated. Mwenze still has no idea how he contracted the virus and she hasn’t been tested, though she swears she doesn’t feel ill. Ebola’s incubation period is 21 days: there’s still time for symptoms to show.

Mwenze’s husband is the third pastor in Beni, a city of more than 200,000, to test positive for Ebola in recent weeks. Aime Fatal Wabenga, a hygienist and public health promoter for the World Health Organisation, says some religious leaders have been rejecting Ebola vaccinations as a sign of faith. “They say ‘we believe in Jesus, Jesus will save us’,” he tells TIME. Roughly 135,000 people in the DRC have now been vaccinated against Ebola, a prevention measure that wasn’t widely available during the West African Ebola outbreak of 2014-2016.

The DRC is currently experiencing the second-largest Ebola outbreak in recorded history, and the response has been critically slowed by violence and insecurity. Between January and mid-May this year, there were 130 attacks on healthcare facilities, according to E.U. figures, during which dozens of medics and civilians were injured, and some killed.

In the affected provinces of North Kivu and Ituri, a large number of armed groups are active. Since August 2018, at least 2,087 people have contracted Ebola and 1,359 people have died — meaning a survival rate of around one third. The deadly disease, formerly known as Ebola haemorrhagic fever, was originally passed to humans by animals. It causes a high temperature, vomiting, headaches and muscle pain, and progresses to internal and external bleeding, severe dehydration and organ failure.

Many Congolese victims still aren’t presenting at hospitals, with 25 percent of cases only identified in postmortems. Nearly 100 more “probable” deaths have been logged by the Health Ministry, largely in cases where medical teams weren’t able to conduct examinations because the patient was already buried.

“Ebola is spreading very quickly and we are running after [it],” says Gaston Tshapenda, a government-employed incident manager, sitting in his office at the Ebola response coordination center for the Beni region, about 18 miles northeast of Mangina, where the outbreak began. Armed soldiers patrol outside the compound, which had been a soccer field just a year before.

Tshapenda sees this security as necessary: a consequence of the large number of attacks on Ebola response workers in such febrile territory. Some have been killed and others held hostage by militants wondering why so much money is suddenly flowing into a long-neglected region.

“There’s a direct connection between the fighting of armed groups and Ebola,” says Tshapenda. “If we even miss one day of activities then Ebola will spread more quickly.”

Health workers carry a coffin containing a victim of Ebola virus in Butembo, Democratic Republic of Congo, on May 16.
John Wessels—Getty Images

On the frontlines of the Ebola response are local Congolese workers with temporary job contracts. They are often driven into this work by economic necessity, as well as a desire to help.

Belinda Landu, a tall 28-year-old with long hair who radiates confidence, was making a meager living as a tailor in capital city Kinshasa before the outbreak. While visiting her mother in Beni last August, she spotted an advertisement for a health promoter. Today, she’s passionate about her role: decontaminating the houses of confirmed Ebola patients. “I want to stop the spread of the epidemic,” she said. “My family understand I work here to help people. If we get Ebola people will help us too.”

When she arrives at the scene of a recent diagnosis, Landu changes into a full protective outfit, including a full plastic bodysuit, mask, hairnet, gumboots, and both latex and rubber gloves, and begins the slow process of covering everything — inside and outside a house — with a chlorinated spray. Locals gather around to stare at her. They’re often terrified, she says, though she tries to be kind — speaking to them before she starts, and even stopping to play soccer with children after she changes out of her outfit.

A few days after Landu decontaminated Mwenze’s house, her employment contract with the World Health Organisation came to an end. “They say the money has run out,” she says. “I will stay home [now], I can’t do anything else.”

In Beni’s Ebola treatment center, set in an expansive space at the back of a hospital, Dr Efoloko Joel, 40, gets ready to put on his protective outfit and do a round of his patients. A short, smiling man, he treated Ebola in his home province, Equateur, during a much smaller outbreak last year that left 33 dead. It makes sense for him to use the knowledge he gained to help others, he says. He sees bolstering patients’ spirits as part of his job.

“When the patients see us they’re happy because I encourage them. Sometimes I help them eat or chat while they’re eating. When I see a patient survive I feel happy,” Joel says.

“With some patients, the Ebola outbreak made them mentally unstable,” he says, referring to how people became so terrified that they began to react irrationally. ”They begin to refuse medicine. They’re so frightened. I discuss this with the patient, tell them it’s possible to survive, to encourage them to take medicine, and give hope.”

Joel is in Beni because this is an emergency, he says. “After I will go back to my normal life. Many doctors refused [to come] because they’re scared. I accepted because I know Ebola, it’s dangerous. I chose to come here.”

Since last August, 126 people have died in the Beni Ebola center. Hygienist Kasereka Melchisedek sorts through their belongings. Previously a farmer, he was forced to look for another job when clashes between militants made it too dangerous to travel to his land. Melchisedek separates out phones and jewelry, disinfecting them to give to the families of the dead. He carries clothes, and anything else leftover, to an incinerator.

“It’s very sad work,” he says. “It’s a commitment, it’s a sacrifice. It’s a team here. We encourage and motivate each other.” Outside the front of the Beni treatment center, 8-year-old Prince is getting discharged. His eyes betray uncertainty as he’s handed a certificate saying he was cured of Ebola, which his parents can show anyone in their Ituri province neighbourhood who has doubts. During the 10 months since the Ebola outbreak began, Congolese communities have been suspicious about the causes and treatment of Ebola, and have repeatedly questioned whether the virus is even real. A lack of belief in those leading the response to the outbreak means Prince could be shunned from his community, despite being declared Ebola-free by doctors.

His mother, Kavira Made, suspects Prince might have been exposed to the virus in school. She’s delighted he’s better again. “I trust he is in good health now. I was not afraid because I was sure the doctors would help my boy.”

In time, Prince will hopefully forget most of his month-long ordeal. But many older survivors suffer long-lasting depression and guilt, particularly if they passed Ebola on to others who died from it.

Women are particularly vulnerable in the crisis. Some 56 percent of DRC’s Ebola victims have been women and girls, who are at increased risk because of their roles as caregivers. “The more you get to know them you hear their stories and get close to them,” said Calvira Germaine, a Congolese psychologist who works with infected mothers in Beni. “Some are already stigmatized before they come. They say how badly they were treated.”

When female survivors are declared Ebola-free, Germaine guides them through reintegrating in communities, saying many need ongoing support and reassurance. “We give them an orientation in how they will continue in life. We speak to family members about how to accept an Ebola mother when she comes back again. We touch her to show others it’s fine. We assure other people it wasn’t her fault.” 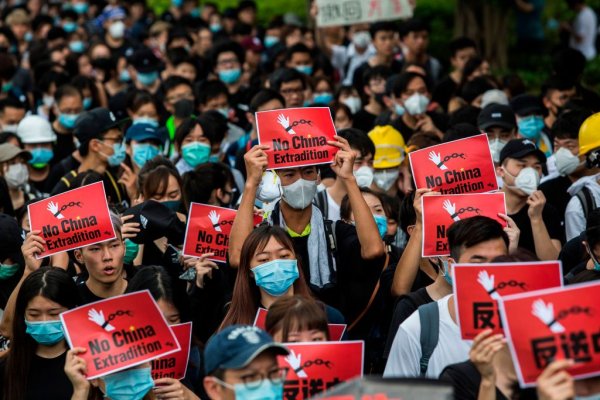 Why Hong Kong Still Protests the Suspended Extradition Bill
Next Up: Editor's Pick