Donald Trump earned billions in free publicity during the 2016 election, defeating a crowded field of more experienced rivals to win the nomination and then the presidency.

So far, none of the people seeking to replace him are trying the same strategy.

Nine of the 23 Democratic presidential candidates took the stage at the Poor People’s Campaign forum in Washington Monday, the latest cattle-call event in which the historically crowded field failed to make a splash.

Even with several candidates struggling to break out of the bottom tier in polling, they stuck to the script, discussing their policy proposals and between the lines promising a return to normalcy if elected.

“In 2016 we got the ‘Hunger Games,’ and, look, we’re paying the price for those showy tactics. It’s a question of, do we want showmanship or leadership?” California Rep. Eric Swalwell, one of the presidential candidates, told TIME after the event. “I submit that most of our candidates are pretty serious and would bring leadership. These are serious issues, and we’ll leave the showmanship to the president, and it will be a one-term presidency.”

To be sure, Trump had a few advantages in 2016: as a reality TV star and longtime cable news guest, he had little trouble getting booked; his ideological flexibility and willingness to brush aside political norms meant he was always surprising; and the Republican grassroots liked his brash approach.

By contrast, many of the Democratic contenders are relative unknowns looking to persuade voters upset by Trump’s norm-breaking behavior, and the Democratic grassroots wants to hear serious policy solutions for major problems.

Monday’s forum — which was not intended to be solely a Democratic event — showcased the difference. Before the event began, organizers encouraged people in the audience to put their phones away and take notes on what the speakers were saying.

Candidates there spent time addressing everything from climate change and the disproportionate effect it has on low-income individuals, to military spending and how they would instead use some of those federal dollars. Massachusetts Sen. Elizabeth Warren said she would be OK with getting rid of the filibuster if Republicans kept using it as an obstructionist tool, and Vermont Sen. Bernie Sanders repeated his support of voting rights for incarcerated felons.

They even held off on any direct criticism of former Vice President Joe Biden — who said that if he’s the nominee he thinks he can win Georgia, North Carolina, South Carolina and possibly even Florida and Texas — who was the first speaker at the event and has so far been the breakaway frontrunner in polls.

The focus on issues has come as a relief to many voters planning on supporting a Democrat.

“The way that I’m feeling as a voter I think that, that whole showboat — we’ve already seen that, and that kind of got us to where we are, and it’s kind of a turnoff at this point, at least for me,” said Vidale Watson, 23, of Washington. “The whole showboating, and have to be the fly, like cool one, the joke-iest one of all, I don’t think that’s what we want to see anymore.” 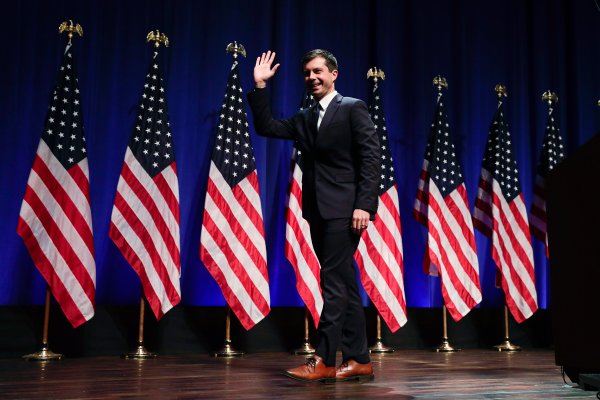 Can a Small-Town Mayor Run as the Foreign Policy Candidate in 2020?
Next Up: Editor's Pick