U.S. to Send 1,000 Additional Troops to the Mideast Over Tanker Attacks

The Trump administration will send about 1,000 more American troops to the Middle East as tensions between the U.S. and Iran continue to rise.

“I have authorized approximately 1,000 additional troops for defensive purposes to address air, naval, and ground-based threats in the Middle East,” Acting Defense Secretary Patrick Shanahan said in a statement Monday evening. He offered no details on where the troops would be deployed or what their missions might be.

The U.S. has accused the Iranians of being behind attacks on two tankers in the Gulf of Oman last week. The Tehran government has denied any involvement in the episode.

“The recent Iranian attacks validate the reliable, credible intelligence we have received on hostile behavior by Iranian forces and their proxy groups that threaten United States personnel and interests across the region,” Shanahan said.

“The United States does not seek conflict with Iran. The action today is being taken to ensure the safety and welfare of our military personnel working throughout the region and to protect our national interests,” he added.

Earlier Monday, the Pentagon released new photos and a timeline that it said bolstered U.S. accusations that Iran was responsible for the attacks in the Gulf of Oman.

President Donald Trump said last week that “Iran did it,” and U.K. officials said it was “almost certain” that Tehran was behind the attacks.

A Navy explosives expert, who is not part of the U.S. investigation, told reporters that while the explosive only damaged the tanker Kokuka Courageous, he cannot infer what the attackers intended to accomplish.

“Iran is responsible for the attack based on video evidence and the resources and proficiency needed to quickly remove the unexploded limpet mine,” according to a statement accompanying the photos.

The Pentagon took the unusual step of identifying the source of the imagery — in this case a Navy MH-60R surveillance helicopter that can fly and hover as it gathers imagery at lower altitudes than drones or P-8 maritime patrol craft.

United Nations Secretary-General Antonio Guterres has called for an independent investigation of the attacks because “it is very important to know the truth,” a statement that has won support from other nations. 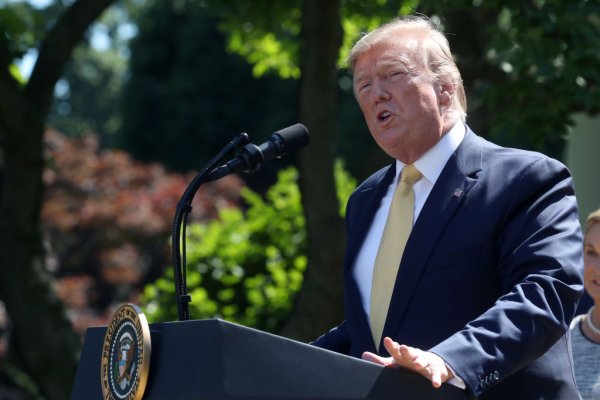 President Trump Accuses the New York 'Times' of a 'Virtual Act of Treason' for an Article His Own Administration Reportedly Cleared
Next Up: Editor's Pick