On May 27, Phoenix police officers pointed guns at a family and arrested the parents after their 4-year-old daughter walked out of a Family Dollar store with a doll they hadn’t purchased. Now the parents are calling for justice.

The incident was captured by a bystander and the video, which showed officers shouting at the family, cursing at them and threatening to shoot, went viral over the past week.

The parents, Dravon Ames and Iesha Harper, said they were unaware that their child had taken the doll from the store. And when the police confronted them, they say one of the officers tried to pull their 1-year-old child out of Harper’s arms, injuring the child. An attorney for the family says that Ames was yanked out of his car by police, thrown on the ground, punched in the back and kicked by the officers. The attorneys also claim that the officers said they would shoot him in the face, which appears to be shown in the video.

After giving her child to a bystander, Harper, who is six months pregnant, was thrown head first into the police car, their attorney alleges.

“It was very terrifying for me and my children. My daughter is terrified to this day of the police. She wakes up in the middle of the night crying,” Harper said at a Monday press conference. “With all this going on, I still have to see the video. It breaks my heart every time I see the video. I don’t like watching it. It shouldn’t have happened over a baby doll.”

“I haven’t been able to sleep at night,” Ames said. “It just keeps flashing back to a barrel being pointed at my face.”

“It’s not enough until it stops,” Sandra Slaton, an attorney for the family, said at the press conference. “Why are the policemen still working? Why are they not suspended? Why is there not action taken.”

In the video, obtained and officially released by the Phoenix Police Department, an officer is seen holding Ames against the police and heard yelling, “When I tell you to do something you [expletive] do it.” Ames is heard apologizing to the officer. Bystanders are heard in the background asking if they can take the kids.

Phoenix Police Chief Jeri Williams released a video statement last Friday saying that she is “disturbed” by the actions and language of the officers.

“I assure you that this incident is not representative of the majority of Phoenix police officers who serve this city,” Chief Williams said in the video. She said an internal investigation was launched into the incident. The officers involved have been placed on desk duty.

Phoenix Mayor Kate Gallego also released a statement on Twitter saying she was “sick” over what she saw in the video.

“I am deeply sorry for what this family went through, and I apologize to our community. This is not who we are, and I refuse to allow this type of behavior to go unchallenged,” Gallego tweeted.

However the family is not accepting the apology and is calling for the officers to be fired. Last week, the family filed a $10 million legal claim against the city of Phoenix that says the officers violated the civil rights of the family.

“We do not in any way accept the apology of the mayor and the chief of police,” Reverend Jarrett Maulpin, a spokesperson for the family, said at the press conference. “The family has described the apology as a sham and lacking all substance.”

The police intercepted the car in an apartment complex and arrested Ames and Harper. According to the police statement, Ames told the officers that he had stolen a package of underwear from the store but threw them out of the window. He was also driving on a suspended license, the police said.

According to the police, Harper said that she saw her child walk out of the store with a doll and she believed that her child took it because they did not have any money. This contradicts what Harper and Ames said during their press conference.

Another woman traveling with the family was allegedly Harper’s aunt. Police learned that she had three misdemeanor warrants and was later booked for them, according to the police statement.

The police said the store manager declined to prosecute and no one was charged for shoplifting.

Ames and Harper said the police’s description of the events is not accurate.

“The police report is full of lies,” Ames said. “All they’re doing is victimizing us even more and making us look bad and it’s hurting us even more.”

Britt London, the President of the Phoenix Law Enforcement Association sent a statement to TIME, saying they will not comment on the details of the video.

“Until that investigation is complete, we are in no position to explain based on our opinion every moment of the video that has ‘gone viral,'” London said in the statement. “Such guesswork is not fair to our members or the members of the public who were involved in this incident.”

Some celebrities have come out in support of the family. Team ROC, a faction of Jay-Z’s Roc Nation organization, offered to provide legal and emotional support for the family.

“Our hearts go out to Dravon Ames, Iesha Harper and their children after this traumatic experience. They deserve compassion and empathy, not to have guns drawn at them and be dehumanized,” Dania Diaz, Team ROC Managing Director of Philanthropy said in a statement sent to TIME. “If they need our help — now or in the future — we are at their disposal.”

Rev. Maulpin says that the suit filed by the parents against the city is about getting justice for them and others who have been affected by police misconduct.

“It’s not about the money. We want them to stop killing our young men and women,” Rev. Maulpin said. 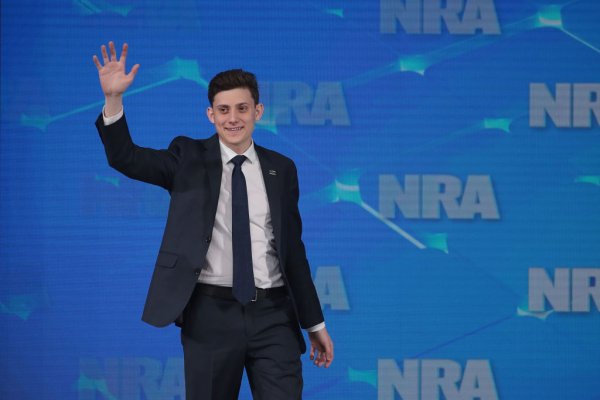 Harvard Rescinds Acceptance of Pro-Gun Parkland Survivor Over Past Racist Comments
Next Up: Editor's Pick