Alleged London Bus Attack Victim Speaks Out in Op-Ed: 'Do You Get Outraged About All Homophobia?'

A woman whose photo went viral after she was allegedly beaten in a homophobic attack in London this month has spoken up in a Guardian op-ed about the experience of her face being used as what she calls “cheap clickbait.”

The woman, whose name is published as “Chris,” was photographed beside her date, Dr. Melania Geymonat, after being beaten and robbed on a bus by a group of men who demanded that the two women kiss. The photo multiplied across the internet after Geymonat posted it on Facebook, writing that the pair had refused. Five men were later arrested on suspicion of attacking the women.

In her op-ed, Chris writes that looking back, what angers her the most is not the attack itself, but what came afterward.

“My persisting anger is directed not towards the idiots on the bus but the reduction of my battered face to cheap clickbait,” Chris writes.

According to Chris’s op-ed, the press coverage of the incident was strange for her to read. Many articles described her as a lesbian, while she identifies as bisexual. She also wrote that she doesn’t remember the attack very clearly, and doesn’t recall why it started.

What she said frustrates her the most, however, was the “commodification and exploitation” of her face. She expressed frustration that the image was expropriated by conservative publications and politicians – especially because she feels that people only cared about the attack because she and Geymonat were “white, feminine, draped in pretty hair.”

She wrote that while some people may find the attack surprising, it shouldn’t come as a shock, saying “people of colour, indigenous people, transgender people, disabled people, queer people, poor people, women and migrants” have long been targeted by violence.

“I have evaded much of the violence and oppression imposed on so many others by our capitalist, white supremacist, patriarchal system because of the privileges I enjoy by dint of my race, health, education and conventional gender presentation. That has nothing to do with the merit of my character,” Chris wrote.

She added that she would prefer that people direct their energies to supporting groups led by people of color, noting that she donated to Astraea Lesbian Foundation for Justice, Trans Women of Color Collective and Transgender Legal Defense and Education Fund. She asked that people also pay attention to lesser-known stories of marginalized victims such as Muhlaysia Booker, Dana Martin and Chanel Scurlock.

“Question why the photo of two attractive, white cisgender women compelled you to post about Pride for the first time,” Chris wrote.

Most Popular on TIME
1
Trump Pushes Division at Mt. Rushmore Speech
2
Child Killed, 3 Injured in Alabama Mall Shooting
3
'What to the Slave Is the Fourth of July?' 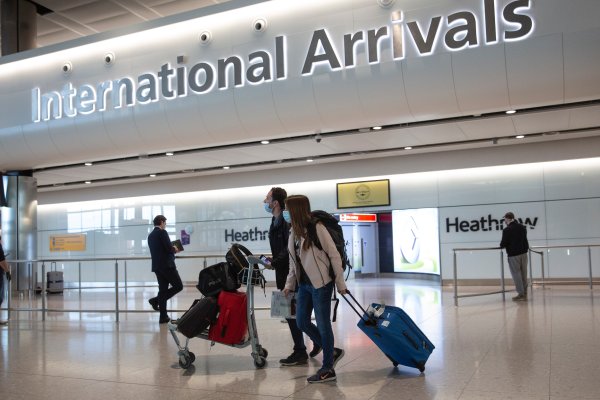 U.K. Lifts Shelter Rules for Some Countries. Not the U.S.
EDIT POST