The Other Debate This Week: Progressives Deciding Between Sanders and Warren

Joe Biden may be the frontrunner for the Democratic primary, but progressive Democrats are locked in a shadow primary of their own: in the next year, they’ll have to decide whether Bernie Sanders or Elizabeth Warren is their best bet to topple him.

So far, the fight has been fairly polite and policy-oriented, and many activists are excited to see two well-known senators with solid progressive credentials putting forward their ideas and doing well in the polls. In a symbolic coincidence, they will be on different nights at this week’s two-night Democratic debates.

“Our members really love that there are progressive candidates like Elizabeth and Bernie who are supporting workers,” says Brian Shepherd, deputy executive director of SEIU 1107, which represents health care and service workers in Nevada. “I don’t think there’s a divide.”

But there are signs that the fissures between the two are growing, and for either one to capture the nomination, they’ll have to defeat the other.

Sanders has led the polls from the beginning, bolstered by the name recognition and grassroots donor base that he built in 2016 and has cultivated ever since. But recent polls have shown Warren catching up to Sanders in some key early states, and even eclipsing him in Nevada.

When asked to explain Warren’s sudden rise in the polls last week, Sanders attributed it partly to the desire to “see a woman elected,” a comment that was controversial but also probably true.

“A lot of women were like ‘oh does it have to be Kamala?’” says a top progressive activist explaining the Warren surge. “Now they’re like ‘woah, this person has my values and I want a woman so that’s where I go.’”

He also moved to recapture some momentum by matching — and raising — one of her signature proposals. Months after Warren made her first big announcement a $640 billion plan to cancel significant portions of student debt for most borrowers, Sanders on Monday announced he planned to eliminate all $1.6 trillion of student debt held by every American.

Read More: A Quick Guide to the Big Ideas in the Democratic Primary

Many progressives know that they’ll eventually have to choose between the two. Some organizations are already beginning primary endorsement processes that are expected to last months. The Working Families Party, for example, has distributed candidate questionnaires to the 2020 primary candidates: based on their responses, the Party’s executive committee will narrow down the candidates and then present them to the membership and national committee for a vote. The organization’s leaders say that both Warren and Sanders have expanded the universe of progressive voters.

“They are pushing ideas that for so long people have shied away from in presidential elections,” says Nelini Stamp, director of strategy and partnerships at the Working Families Party. “The fact that we see two student debt cancellation policies and they’re getting bigger and bigger every time, that’s better for our movement.”

Still, organizers know that a battle is on the horizon. “People feel like the things Bernie has done don’t feel that new or interesting,” says a top staffer at a progressive organization who was not authorized to speak publicly. “There’s a Bernie fatigue in the institutions. People are more interested in something fresh.”

One divide is between those with jobs at progressive institutions, and those who are volunteer progressive activists: the professionals tend to support Warren, while the volunteers have so far stuck with Sanders. Gender is another pressure point: many women progressives in 2016 felt they had to choose between their values and their feminism, while Warren offers them an opportunity to combine the two.

Progressives are also divided on which candidate has a the greater weaknesses. Warren supporters think Sanders’s open embrace of Democratic socialism would make him unelectable in a general election, while Sanders loyalists think Warren’s ill-advised foray into her Native American ancestry would weaken her against Trump.

Some hardcore progressives who support Sanders have already begun to cast doubt on Warren’s progressive credentials. They point to an interview where she appeared to waffle on single-payer health care (she co-sponsored Sanders’s Medicare for All bill.) They whisper that she still calls herself a “capitalist,” while Sanders recently gave a major speech about democratic socialism.

Sanders still leads Warren in nationwide polling averages, and he has a durable base of hardcore supporters who have supported him since 2016. But some of his 2016 supporters might be drawn to other candidates — the question is, how many?

Some observers have a guesstimate. “70% are still with him, but another 30% have gone to Warren or Pete [Buttigieg,]” says Jane Kleeb, chair of the Nebraska Democratic Party and board member of Our Revolution, a 501c4 formed in the wake of the 2016 Sanders campaign to promote similarly progressive candidates.

“Warren’s a woman, and a lot of Bernie’s base supporters want to see a woman,” she continued. Voters like her daughter, she says, are intrigued by South Bend, Ind., Mayor Pete Buttigieg because “she’s tired of all the old people running the Democratic party.”

But for now, progressives are just excited to watch it play out.

“Both of those candidates attract a lot of young people,” says Shepherd. “I think these are people who typically would stay home if there’s not a candidate who’s talking about issues that impact them.” 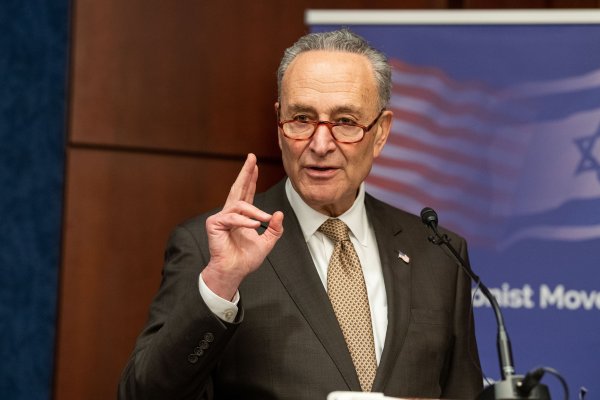 Chuck Schumer Is Trying to Clear the Iowa Senate Primary
Next Up: Editor's Pick