On May 19, President Donald Trump appeared to set a red line in a tweet: “If Iran wants to fight, that will be the official end of Iran. Never threaten the United States again!”

Nearly a month later, Iran has put Trump’s red line to the test with apparent attacks on two foreign tankers transiting through the Gulf of Oman that drove up oil prices and escalated tensions.

The U.S. military released grainy black-and-white video footage late Thursday of what officials said were Iranian forces on a patrol boat removing an unexploded mine from a ship — allegedly attacked just hours earlier — in an effort to destroy incriminating evidence.

It was an extraordinarily rare move for the military to quickly declassify such imagery for public consumption, but the footage provided compelling documentation to support the Administration’s claims about Iran’s role in sabotage.

Still, the events Thursday pose a dilemma for Trump. Not responding to the latest attacks, if they were perpetrated by Iran, could encourage even more in coming days. Ruling out even limited military action, such as sinking several small fast-boats belonging to Iranian forces, which often harass U.S. Navy ships in the region, could encourage Tehran to launch even more brazen attacks.

But a large military response would spike shipping insurance rates and oil prices, cost lives and further destabilize the region, officials said. The Gulf of Oman, where the attacks took place, is near the Strait of Hormuz at the mouth of the Persian Gulf, through which much of the world’s oil passes.

Iran denied its involvement in the attacks, but Secretary of State Mike Pompeo insisted that intelligence reviewed by U.S. officials had indicated Iran’s culpability. He provided no evidence to support the assertion at the time, but laid out the Administration’s case. “This assessment is based on intelligence, weapons used, level of expertise needed, recent similar Iranian attacks, and the fact that no proxy group operating in the area has the resources and proficiency to act with such a high degree of sophistication,” he told reporters at the State Department.

It was the latest of several recent attacks in the Middle East that Pompeo attributed to Iranian government. The incidents, he said, included an earlier assault on four tankers in the Gulf of Oman near the Strait of Hormuz, armed drone attacks against Saudi oil facilities, a deadly bombing in Afghanistan and a rocket attack on the Green Zone in the Iraqi capital, Baghdad, where the U.S. embassy is located.

The U.S. military released this photo late Thursday, June 13, 2019 showing the oil tanker M/T Kokuka Courageous in the Gulf of Oman with damage and what is allegedly a limpet mine.
U.S. Central Command
The images show what the U.S. military believes is an unexploded magnetic mine attached to the hull of the tanker M/T Kokuka Courageous following the attack on Thursday, June 13, 2019 in the Gulf of Oman.
U.S. Central Command

“Taken as a whole, these unprovoked attacks present a clear threat to international peace and security, a blatant assault on the freedom of navigation, and an unacceptable campaign of escalating tension by Iran,” Pompeo said.

Seven hours later, the U.S. military’s Central Command, which oversees all forces in the Middle East, released footage and a detailed timeline that revealed what U.S. reconnaissance aircraft observed while responding to the Japanese-owned Kokuka Courageous. The crew of 21 was forced to abandon their damaged ship and clamber aboard the USS Bainbridge. American sailors observed an unexploded magnetic mine, called a limpet mine, attached to Kokuka Courageous.

Meanwhile, the U.S. military says, a patrol boat belonging to the Islamic Revolutionary Guard Corps, an arm of the Iranian military, sidled up to the hobbled ship. Footage shows grainy figures on a crowded deck of a small boat floating next to a massive ship. An individual on the boat reaches up and dislodges an object from the ship’s hull.

The video footage matches a color photograph, also released by the military, which apparently shows the unexploded mine before it was removed.

The military condemned Iran’s actions, but indicated the best approach is to find a way out of the growing stand-off. “The United States has no interest in engaging in a new conflict in the Middle East,” Urban said. “However, we will defend our interests.”

The Administration appears divided over how to proceed. There is no dispute that Iran is a bad actor intent on expanding its influence in the Middle East, either directly as its military forces and Iranian-backed political groups have done in Iraq, or by funding and equipping proxies such as Hezbollah in Lebanon and Hamas in Palestine. The dispute is how to respond.

Some intelligence, diplomatic and military officials warn that a U.S. attack on Iran in response to an Iranian attack that neither sank the ships nor injured any crew members could spin out of control.

While Iran is no match for the U.S. militarily, two officials said after the video was posted, if it decides to respond, Iran is most likely to mount an asymmetrical response, perhaps launching cyberattacks or strikes by terrorist groups Tehran supports.

It could take time to prove that Iran was responsible for such attacks, and even if there was conclusive proof, U.S. counterattacks would risk endangering the U.S. and other economies, one of the officials said, speaking on the condition of anonymity without authorization to discuss the issue publicly.

Tensions between the U.S. and Iran have steadily increased since Trump walked away from the landmark multilateral nuclear deal a year ago. The Administration’s mounting pressure on Iran began with a war of words but has escalated toward more serious confrontations.

While Pompeo and National Security Adviser John Bolton have argued for a more aggressive response, Trump has been reluctant to use military force and some officials in the intelligence community, the military and the State Department have warned that a military response could easily spin out of control.

“It is quite stunning that Pompeo gave no time and space for conducting a proper investigation before blaming Iran,” said Ali Vaez, the Iran project director at the International Crisis Group. “If Iran was behind these attacks, it clearly shows that Trump’s maximum pressure strategy has rendered Tehran more, not less, aggressive. If Iran is not the culprit, it is clear that some other actor could be trying to engineer a Gulf of Tonkin-type of incident to push the U.S. into a conflict with Iran.”

Either way, the Administration’s aggressive maneuvers and Iran’s responses have created an environment ripe for inadvertent conflict.

Last month, Trump authorized deploying additional troops and firepower to the Middle East to deter what his Administration says is “malign behavior” by Iran that is intended to damage the United States and its allies. A squadron of 12 jet fighters, several spy planes, Patriot missile batteries, a B-52 bomber task force, the USS Abraham Lincoln aircraft carrier strike group and other military assets have already been dispatched to the region.

In the latest incident, the U.S. Navy confirmed it received two separate distress calls from the two attacked ships, Norwegian-owned MT Front Altair and the Kokuka Courageous, beginning at 6:12 a.m. local time. Images taken at one of the incidents show flames blanketing the ship’s hull while clouds of black smoke billow into the clear sky.

It’s not yet clear how the IRGC could be allowed to get anywhere near the Kokuka Courageous, let alone make away with the only smoking gun that could’ve possibly linked Iran directly to the attacks. The innards of the unexploded limpet mine would’ve undoubtedly provided telltale clues that could help identify the perpetrator.

However, circumstantial evidence against Iran is mounting. Last month’s oil tanker attacks were also carried out with a magnetic mine. Adm. Michael Gilday, the U.S. military’s Joint Staff director, told reporters at the Pentagon last month that the IRGC was directly responsible for the sabotage of four tankers in the Gulf of Oman. When pressed about the evidence, Gilday said the intelligence was too sensitive to disclose.

One U.S. official said the assessment that Iran is responsible rests partly on the idea that “only Iran has the resources to do this.” While that makes sense, this official said, limpet mines are relatively simple and cheap, and could be triggered remotely or by timer like a roadside bomb, without advanced triggering mechanisms.

While it’s far more likely that Iran did this, this official said, it would be better have positive intelligence rather than an absence of other likely suspects before responding with military action, given the danger of escalation.

Another issue, said one official after Pompeo’s remarks, is distinguishing between the Revolutionary Guard and its Quds Force on the one hand, and Iran’s civilian government on the other. “The Revolutionary Guard is an entity unto itself, so it’s conceivable that the IRGC could have launched these attacks without orders from [Iranian President Hassan] Rouhani,” the official said.

In April, the Trump Administration designated the IRGC as a terrorist organization, which restricts members’ banking transactions and ability to travel. It marked the first time the U.S. designated an arm of a nation’s government as a terrorist group. “After being designated a terrorist organization and sanctioned, the Guard certainly had a motive, given the effect the sanctions will have on its economic interests,” the official said. “It’s not like Iran has civilian control of the military, so what’s the right response?”

Since abandoning the 2015 nuclear deal, the Trump Administration has turned the global financial system into a weapon against Tehran. The policy has triggered an exodus of corporations and financial institutions that would rather abandon their investments in Iran than risk U.S. Treasury Department sanctions.

“No economic sanctions entitle the Islamic Republic to attack innocent civilians, disrupt global oil markets, and engage in nuclear blackmail,” Pompeo said. “The international community condemns Iran’s assault on the freedom of navigation and the targeting of innocent civilians.” 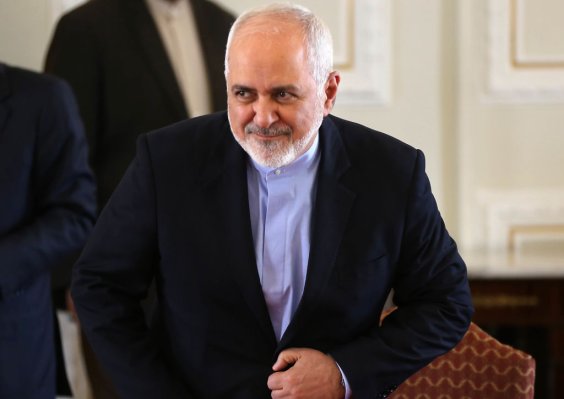 U.S. Troop Buildup Is a Threat to Peace, Iran Official Says
Next Up: Editor's Pick