After more than three years serving as one of the most trusted members of Donald Trump’s administration, Sarah Huckabee Sanders is stepping down from her current position as White House Press Secretary.

“Our wonderful Sarah Huckabee Sanders will be leaving the White House at the end of the month and going home to the Great State of Arkansas,” Trump tweeted Thursday afternoon.

Sanders, 36, worked on the communications team of Trump’s 2016 campaign, and later joined the White House as deputy press secretary when Trump took office. She’s held her current role since July 2017, after Sean Spicer resigned from the position.

Though many officials — including former White House Communications Director Anthony Scaramucci and former Attorney General Jeff Sessions — have departed the Administration on fraught terms, it appears Sanders is amicably parting ways with her boss.

During an event at the White House on Thursday, Trump called Sanders a “great, great magnificent person,” with her by his side. Sanders, meanwhile, said through tears that the job was “the honor of a lifetime,” and that she “loved every minute, even the hard minutes.”

A White House Press Secretary is generally responsible for delivering routine and formal press briefings, though Sanders often went weeks or months without doing so. In fact, it’s been over 90 days since her last.

Sanders’ stint has not been a particularly easy one. In addition to having to fend off questions about Russia’s ties to the 2016 election and the resulting Mueller report, her boss is also known to cause media uproars by tweeting out new government policies and staff changes unexpectedly, surprising even top government officials.

But it’s not just Trump’s actions that have put Sanders under fire. She faced her own scrutiny when the Mueller report revealed that an earlier claim she made about Former FBI Director James Comey was unfounded. She had told the media that “countless” members of the FBI indicated they lost confidence in Comey at the time of his firing. Later, in interviews with the Special Counsel’s office, she called that a “slip of the tongue.”

Other controversial incidents include her saying Congress wasn’t “smart enough” to page through Trump’s tax returns, being asked to leave a Virginia restaurant over political differences, and suspending the hard press credentials of a well-known journalist after a testy exchange about immigration.

In his announcement of Sanders’ departure, Trump said he hoped she would run for Governor of Arkansas, a position her father, Mike Huckabee, previously held. Sanders said she was eager to return home to be a mom to her three children.

A replacement for the position has not yet been named. 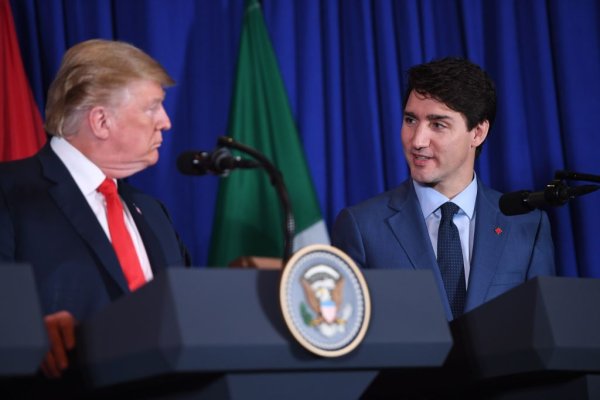 Trump to Host Trudeau Next Week to Talk Trade Deal, Huawei
Next Up: Editor's Pick