Donald Trump is set to host Canadian Prime Minister Justin Trudeau next week as the American president’s tariff threats continue to cloud the outlook for the countries’ trade deal with Mexico.

Trudeau will visit Washington on June 20 and is tentatively scheduled to meet Trump that day, according to a Canadian official who spoke on condition of anonymity because the visit hasn’t been announced. The White House didn’t immediately respond to a request for comment.

Trade and China will dominate the agenda, the official said. The two leaders will discuss ratification of the replacement for the North American Free Trade Agreement, known as USMCA, which still faces varying hurdles. They’ll also talk about an ongoing fight over U.S. tariffs on Canadian softwood lumber — a decades-old dispute between the countries — and on Trump’s potential tariffs on uranium, of which Canada is a major producer.

The two are also set to discuss Trump’s feud with China. Canada has been on the front lines of that battle since Canadian authorities arrested Huawei Technologies Co. Chief Financial Officer Meng Wanzhou in Vancouver late last year over a U.S. extradition request.

The G-20 summit in Osaka, Japan, will also likely come up during the Trump-Trudeau meeting, which was first reported by the Toronto-based Globe and Mail. But the USMCA will be the foremost trade issue on the agenda, the official said.

Trump last week backed off a threat to impose tariffs on Mexico, which agreed to do more to curb Central American migration through its country to the U.S. Any new tariffs on Mexico could imperil the trade deal’s progress, and Trump has reserved the right to reignite the dispute.

The White House has called on U.S. House Speaker Nancy Pelosi to bring a vote on the USMCA trade deal to the floor, and said it would pass if were brought to a vote, though Democrats continue to seek certain changes. Canada is proceeding with ratification, though time is running out to do so before an election there this fall. Trudeau is trailing in polls.

The arrest of Meng caught Canada between two warring giants, as China has demanded Canada simply release Meng. Nine days after her arrest, China seized two Canadians, who remain in custody with only sporadic access to consular officials. Meng has been living under house arrest as her case inches forward.

The U.S. has sided with Canada and called for China to release the two Canadians, Michael Kovrig and Michael Spavor. Trump has also mused that Huawei, and Meng specifically, could be included in any trade deal with China, undercutting Trudeau’s assurances that the extradition process is free from political interference. 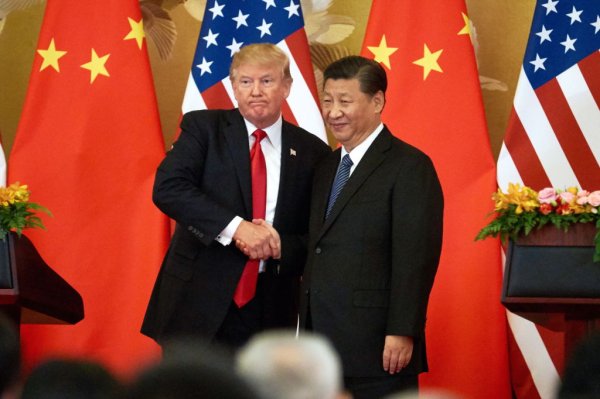