What Being Malala's Father Taught Me About Feminism

Long before my daughter, Malala Yousafazi, was born, long before we began fighting for girls’ rights to education together, and long before the Taliban’s brutal attack on her brought the world’s attention to her story, I made a decision.

Growing up in a village in Shangla, northern Pakistan, I was surrounded by patriarchy. I had five sisters and a brother and I saw how we boys got better shoes, more clothes, and tastier cuts of chicken than the girls. I saw how my mother couldn’t go out unescorted and, on documents like doctors’ prescriptions, was never referred to by her name – Maharo Bibi – but as mother of Ziauddin, or wife of Rohul Amin. And, worst of all, I saw how I got to go to school, while my sisters stayed home, crippling their future.

I was very determined that if I ever got to be a father, I’d be different.

When I married my wife, Toor Pekai, we chose to build an egalitarian family, respecting each other as equal partners and raising our daughter Malala the same way we raised our sons, Khusal and Atal. I didn’t hear the word feminist until I was 45, after the attack on Malala led us to move to the city of Birmingham in the U.K. But it was feminism I had been trying to spread in my family, and in my community, for years.

I believe fathers have a crucial role to play in the fight for women’s rights. Of course, when your rights are being violated — at home, at work, anywhere — your voice is the most powerful to challenge your oppression. And so women’s voices are the most important in feminism. But in patriarchal societies, a father’s voice is perhaps the next most important tool to galvanize change.

We have seen great moments in history, from the Suffragettes, to #MeToo, and wonderful global organizations and local organizations, who are working for gender equality, and for the rights of women and girls. But in patriarchal societies – which even many Western countries still are –, one platform, one organization, is universal: the family. When a father begins a journey into feminism, believing in the worth of his daughters, he can change his whole family’s future.

I’m not sure why I chose to start that journey, while other men accept the values passed down to them for centuries. Maybe it’s because I was bullied as a child, for my dark skin and my stammering problem, so I was angry about any kind of discrimination against someone for the way they are born.

But I am sure of one thing: patriarchy is sheer stupidity. Fathers have a great interest in dismantling it. And we as campaigners need to communicate that to them.

Life within patriarchy is a sad, frustrated life, for everyone. I have seen families in Pakistan where a father and mother have one boy and five or six girls. Because of social norms, the father and his one son go out to earn for the whole family. The burden falls to them, while all his sisters have to stay back at home, not sent to school, unable to do jobs, just waiting to get married. A guy sacrifices his life for a foolish norm, and girls don’t see their potential unlocked. And, even in countries like the U.S. and the U.K., while girls are educated and often have the same opportunities as boys, issues like pay inequality, sexual harassment and misogyny continue to damage girls’ careers and personal lives. Unhappiness breeds unhappiness.

Fathers who help unlock their daughter’s potential, standing up for their rights and raising them to believe they have them, bring prosperity and happiness to their entire families. Worldwide, according to our data at the Malala Fund and the World Bank, if we gave all the girls in the world free, quality education for 12 years, we would add between 15 and 30 trillion dollars to the world economy. It really is win, win.

These arguments are powerful, and the arguments for patriarchy are weak. That is why the Taliban shot Malala in 2012 as she and I campaigned against their ban on girls going to school. They knew that one girl with a voice can create more change than their guns and bombs.

The attack was the worst thing that could happen to a family and remembering it is traumatic. Malala is not just my daughter, she is my comrade, my soulmate – jani, in Urdu, my nickname for her. To see her on the verge between life and death was terrible. But it did not affect our commitment to equality. If anything, it made us more sure that our fight is worthwhile.

Now, as Malala campaigns around the world without me and studies for her degree at Oxford University, I miss her deeply. Her first week in her dorm room, I peeked in and shed a few tears while she wasn’t there, thinking about how independent she has become.

But in my heart, I was so happy to see her move freely and confidently around the world, no longer needing me as an escort. Good parents should want their children to be as independent as early as possible.

Within my family, we have broken the chains of patriarchy. Because of that, all of us — not only Malala and Toor Pekai, but my sons and I too — are free.

As told to Ciara Nugent 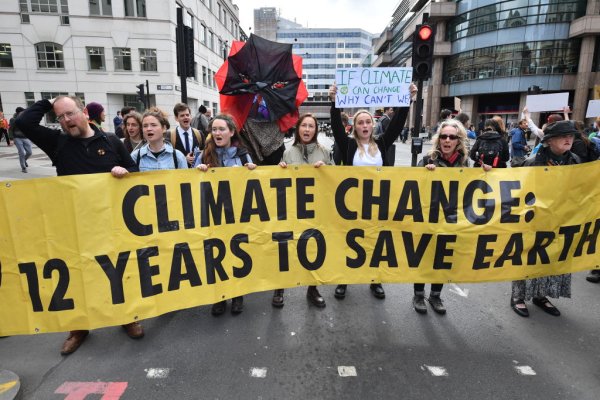 This Is the Only Way to Tackle the Climate Emergency
Next Up: Editor's Pick