Troubled Boeing 737 MAX Will Be Cleared to Fly Again by December, FAA Says

Boeing’s 737 Max aircraft, grounded since March after two fatal crashes in five months, should be back in the air by December, a top U.S. regulator said.

It’s not possible to give an exact date as work progresses on safety fixes to the aircraft, Ali Bahrami, the Federal Aviation Administration’s associate administrator for aviation safety, said in an interview Wednesday at a conference in Cologne, Germany.

While the FAA is “under a lot of pressure,” he said the Max will be returned to service “when we believe it will be safe,” following reviews of the design, flight testing and other checks. Bahrami was reluctant to provide a timeline, but asked whether the plane would resume service this year or next, he said remarks by Boeing Chief Executive Officer Dennis Muilenburg projecting a return by the end of 2019 sounded correct.

Knowing when the latest version of the 737 will fly again would help airlines contend with the disruption caused by the grounding of the narrow-body, Boeing’s most popular model. The FAA has said that there’s no time frame to sign off on Boeing’s proposed fix for the jet.

Muilenburg said last week on CNBC that he expected that the Max would be back in the air by year-end.

American Airlines Group Inc. has kept the plane off its schedule through Sept. 3, while Southwest Airlines Co. and United Continental Holdings Inc. are looking at resuming Max flights in early August.

Boeing is finalizing a software fix for a flight-control system malfunction linked to the accidents involving Lion Air and Ethiopian Airlines, as well as proposed new pilot training. A combined 346 people were killed in the crashes five months apart.

The FAA isn’t the only regulator that holds sway over returning the Max to the skies. The European Aviation Safety Agency also is examining Boeing’s changes, a process that won’t conclude until the end of July at the earliest, Director Patrick Ky said in a separate interview. The agency is considering whether to require additional simulator training for flying the Max, as well as potential design changes, he said.

Boeing has cut its production rate for the model by 10 planes a month to 42. The company had earlier aimed to increase output to 57 monthly in the second half of the year.

The Chicago-based planemaker faces an estimated $1.4 billion bill for canceled flights and lost operating profit at airlines if the Max is still grounded by the end of September, said Bloomberg Intelligence analyst George Ferguson.

–With assistance from Benjamin Katz 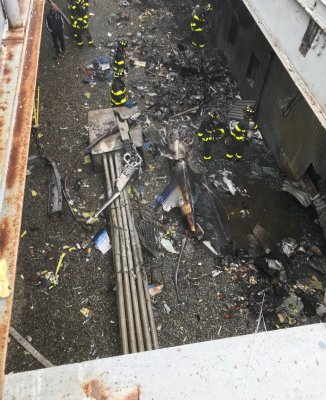 1 Dead After Helicopter Crash-Lands on NYC Building
Next Up: Editor's Pick