(Bloomberg) — India will launch a lunar mission on July 15, attempting to become the fourth country to land on the moon and cementing its place among the world’s space faring nations.

The Chandrayaan-2 mission aims to deliver a rover to an elevated plane close to the uncharted lunar South Pole on Sept. 6 or 7 and investigate the surface for signs of water and potentially new sources of abundant energy. It’s one step in an envisioned progression that includes putting a space station in orbit and — eventually — landing a crew on the moon.

Chandrayaan, which means “moon vehicle” in Sanskrit, exemplifies the resurgence of international interest in space. The U.S., China and private corporations are among those racing to explore everything from resource mining to extraterrestrial colonies on the moon and even Mars. If successful, India will be only the fourth country to make a soft landing on the moon, in which vehicles touch down without damage, after the former Soviet Union, the U.S. and China.

“We have left no stone unturned to make the lunar soft landing a success,” Kailasavadivoo Sivan, chairman of Indian Space Research Organisation, the country’s equivalent to NASA, told reporters at the headquarters in the southern Indian city of Bengaluru.

The upcoming moon mission is the most complex ISRO has attempted. Two Chandrayaan modules — an orbiter and a lander — will be stacked together inside a launch vehicle equipped to lift heavy satellites into orbit. A third module, the lunar rover, will roll out on landing and operate for at least 14 days on the surface. It will wander about 1,300 feet, surveying a surface that reaches minus 250 degrees Fahrenheit (minus 157 degrees Celsius) in the shadows.

The idea is to explore virgin territory on the lunar surface and analyze crust samples for signs of water and helium-3. That isotope is limited on Earth yet so abundant on the moon that it theoretically could meet global energy demands for 250 years if harnessed.

The rover will send pictures of the lunar surface within 20 minutes of landing, Sivan said. The landing area in South Pole was chosen as it has no craters or boulders and is nearly flat with very good visibility due to solar light, he added.

Chandrayaan-1 in 2008 orbited the moon and ejected a probe that discovered water-bearing molecules in craters at the moon’s poles, with the highest density inside permanently shadowed craters at the South Pole. The presence of water would be invaluable as missions advance to the next phase: building a station for mission crews.

Government-backed space agencies are jostling with private missions to conquer the cosmos. Amazon.com Inc. founder Jeff Bezos has announced he’s sending a spaceship to the moon, and billionaires Elon Musk and Richard Branson are preparing to launch satellites or send astronauts and paying tourists into space. The Trump administration has pushed for a return to the moon.

This year alone, Israeli and Chinese missions have targeted the satellite, Earth’s closest neighbor. In April, Israel’s first moon-landing attempt ended in a crash. China plans to launch the Chang’e-5 probe to the moon later this year, with three more in the offing. At least two of them will land on the moon’s South Pole and conduct research.

India has earned a reputation as a frugal space explorer whose competitively priced commercial-rocket launch services are much sought after for satellites. The Chandrayaan-2 mission is estimated to cost about $87 million. NASA’s current budget is about $21.5 billion, while China’s annual space spending is about $8 billion.

Yet India’s space agency has ambitious plans for a robotic mission to Venus, and returning to Mars with a rover. A craft called Mangalyaan orbited Mars after its 2013 launch, scouring the atmosphere for methane and carbon dioxide to help determine whether life ever existed there.

ISRO’s next priority is the $1.4 billion Gaganyaan mission, which aims to put three Indian “gaganauts” — at least one of which will be a woman — into orbit. 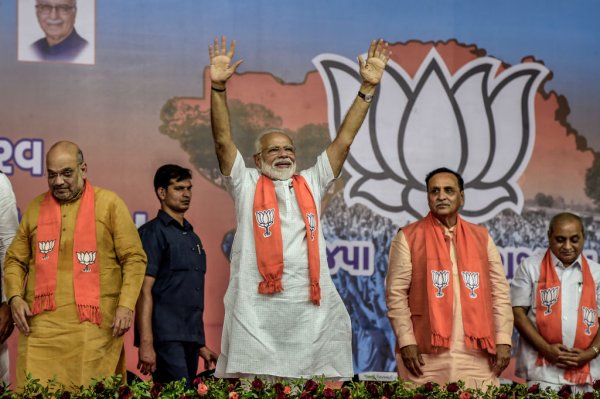 Modi Has United India Like No Prime Minister in Decades
Next Up: Editor's Pick