Comedian Jon Stewart chastised Congress on Tuesday for failing to act quickly to ensure that the September 11 Victims Compensation Fund does not run out of money.

Stewart spoke before a House Judiciary subcommittee hearing packed with firefighters, police officers and other supporters to advocate for a bill that would extend the fund – which compensates survivors and first responders who suffered physical harm as a result of the September 11 attacks – for the next 70 years. Advocates have expressed frustration that nearly two decades after the attacks, the fund still hasn’t been made permanent.

This February, officials who manage the $7.4 billion fund announced that it is running out of money, and will begin to slash future payouts by between 50% and 70%. The fund has awarded more than $5 billion in compensation for more than 20,000 claims, but more than 17,000 claims are still being processed. Advocates say that the program should be extended indefinitely, because many people are continuing to be diagnosed with illnesses tied to the Sept. 11 attacks, including cancer.

Rupa Bhattacharyya, the fund’s special master, said that 835 awards were reduced as of May 31.

“The plain fact is that we are expending the available funds more quickly than assumed, and there are many more claims than anticipated,” Bhattacharyya said.

Stewart, a longtime advocate for the 9/11 community, pointed out that the only empty seats in the room were designated for lawmakers. Stewart decried Congress for showing “disrespect” to first responders, calling the weak attendance “an embarrassment to the country and a stain on the institution.”

Stewart argued that it is unacceptable for Congress to move slowly on the bill while so many people are “sick and dying.” Stewart said that families are asking, “Why is this so damn hard and takes so damn long?”

House Judiciary Committee Chairman Jerry Nadler – who represented the district that includes the World Trade Center during the attacks—called on his fellow congress members to take action and bring the bill forward.

“While I know it can be frustrating watching a body as large as the U.S. Congress work its will, when we do act, we can bring tremendous resources and the strength of the entire federal government to bear on a problem and can improve the lives of so many,” Nadler said.

The bill is set to be marked up in the committee tomorrow, and will then move to the floor for a vote.

Some advocates say that while extending the program has taken some time, there are still reasons to be optimistic about the bill.

After the hearing, Gerard Fitzgerald, the President of the Uniformed Firefighter Association of Greater New York and a 9/11 first responder, told TIME that more than 300 legislators have already said that they will support the bill.

Fitzgerald says that it wasn’t particularly important to him for the legislators to show respect by sitting in at the hearing.

“If they vote the right way, I’ll take that respect,” Fitzgerald says.

As a subcommittee hearing, the entire Judiciary Committee was not scheduled to be present during the meeting.

Fitzgerald said that it’s time for legislators to show that they truly will “never forget” the survivors of the attacks, because many first responders and survivors are facing futures that were shaped by the tragedy.

“When you’re being treated for your disease, and/or dying from it, the stress of the economics and how your family is going to deal or survive without you – whatever dreams or aspirations that you had for your children, whether it be school or even your family losing the house – this money means something to the families that will be left behind,” Fitzgerald says.

Even some members of the subcommittee who support the bill skipped the hearing. California Rep. Eric Swalwell told TIME that he was at the Department of Justice at the TIME of the hearing.

“I get pulled in different directions,” Swalwell said. When asked about Stewart’s comments, Swalwell said, “I appreciate his vigor and passion on the issue.”

New York Rep. Hakeem Jeffries said that he doesn’t feel that Congress has been ignoring the bill, noting that Chairman Nadler has been a “strong champion” of the issue.

“We’re going to continue to push the issue as Democrats have done from the very beginning,” Jeffries said. 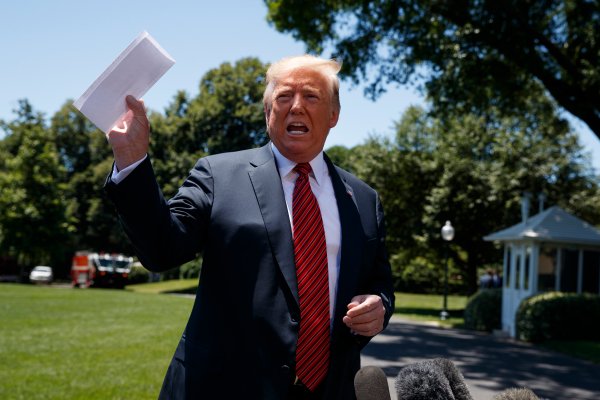 Did Trump Inadvertently Reveal a Secret Mexico Deal?
Next Up: Editor's Pick