Vice President Mike Pence delivers remarks inside the Amphitheater during a Memorial Day event at Arlington National Cemetery in Arlington, Va., on May 27, 2019.
Tom Brenner—Getty Images
By Josiah Bates

Vice President Mike Pence made it clear that U.S. embassies were told not to display rainbow pride flags celebrating LGBTQ rights on their flagpoles during Pride Month, confirming reports that the Trump administration refused to give embassies permission to do so.

Pence told NBC News that he was aware of the State Department telling U.S. embassies that the American flag is the only flag that should be hoisted on the flagpole.

“I support that,” Pence said in an interview that aired Monday evening.

Even so, embassies around the world have still found ways to show support for the LGBTQ community during Pride Month this June.

In Seoul, South Korea, a Pride flag was hanging on the embassy building right behind the flagpole that had Old Glory on it. At the Chennai, India U.S. Consulate a video was posted of the Counsel General in front of a Pride flag, addressing people. At the New Delhi, India, U.S. Embassy, a picture was posted on Twitter that showed the building lit up in Pride colors.

Pence said during his NBC interview that he and President Trump are “proud to be able to serve every American.”

“We both feel that way very passionately, but when it comes to the American flagpole and American embassies, and capitals around the world, one American flag flies,” Pence also said.

However, the decision to ban Pride flags from hanging on U.S. Embassy flagpoles makes it hard for some people in the LGBTQ advocacy community to believe the Trump Administration supports them, NBC News reported.

Trump had previously tweeted his support of Pride month, noting that his administration has launched a global campaign to decriminalize homosexuality.

“As we celebrate LGBT Pride Month and recognize the outstanding contributions LGBT people have made to our great Nation, let us also stand in solidarity with the many LGBT people who live in dozens of countries worldwide that punish, imprison, or even execute individuals on the basis of their sexual orientation,” Trump said in a May 31st tweet.

Pence, meanwhile, has been repeatedly accused of not supporting the LGBTQ community. In 2006, while serving as a U.S. Representative for Indiana, the self-described conservative Christian rose in support of a constitutional amendment that defined marriage between a man and a woman, and described gay marriage as a sign of “societal collapse.” A year later, he voted against a bill that would outlaw discrimination against LGBTQ people in the workplace.

In 2015, Pence also caused an uproar when he signed the Religious Freedom Restoration Act into law while serving as governor of Indiana. Detractors said it was a thinly veiled attempt to discriminate against the LGBTQ community, although Pence disagreed, calling the measure a way to empower “people to confront government overreach.” 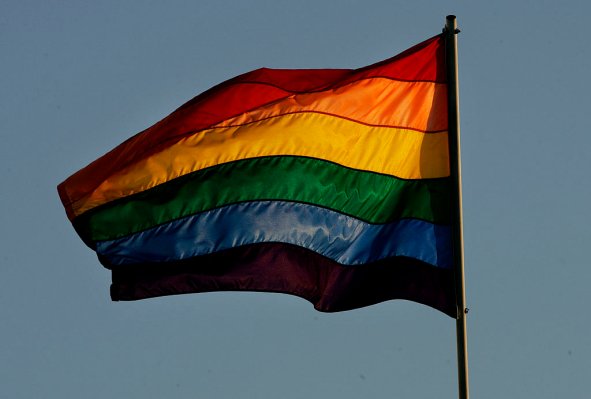 Americans Are Increasingly Supportive of Trans Rights: Survey
Next Up: Editor's Pick