Sex Workers Are an Important Part of the Stonewall Story, But Their Role Has Been Forgotten

Late one evening in May of 1959, two members of the Los Angeles Police Department entered Cooper’s Doughnuts, a sketchy downtown coffee joint, looking for trouble. The LAPD, as the historians Lillian Faderman and Stuart Timmons have written, “prided itself on being one of the most determined enemies of homosexuality in the nation,” and Cooper’s was known to be an all-night hangout for gay people, drag queens, transgender and gender-nonconforming folks, and “hustlers”—part- or full-time sex workers. Many of them were people of color. The cops barged in that spring night and pointed at three customers, demanding, “You, you, and you—come with us.”

This was a familiar scene. Yet, for some reason, that night the crowd at Cooper’s had had enough. They started throwing donuts, then coffee. The police fled to their squad car and called for backup. Eventually, the cops managed to quell the riot, but not before fighting had spread to the streets and many of the people they’d attempted to target had escaped.

Incidents like the one at Cooper’s presaged the more famous queer uprising at the Stonewall Inn a decade later, but—except for Stonewall—these incidents have been largely forgotten. In the minds of many, Stonewall represents the beginning of a movement. Yet the activists at Stonewall built on decades of previous activism, and this activism was geared not merely toward the liberation of gay men and lesbians, but also toward the liberation of a wider group of queer people: trans and gender-nonconforming people, queer people of color and queer sex workers.

Indeed, the fight for LGBTQ rights was and is inseparable from the fight for sex workers’ rights. Both movements insist that the police have no right to tell consenting adults how to use their bodies; both movements demand that the state keep out of marginalized folks’ bedrooms.

In addition, due in large part to the limited economic options available to out queer people at the time, many of the participants at Stonewall and in the uprisings that made Stonewall possible themselves sold sex. Those fighting for the liberation of queer people today, and marking the 50th anniversary of Stonewall this June, should know the radical origins of the LGBTQ movement and the debt they owe to sex workers.

Riots like the famous one at Stonewall had an extensive genealogy. Throughout the 1960s, queer people set up picket lines, engaged in sit-ins, marched down boulevards and rioted against police harassment in New York; Philadelphia; Washington, D.C.; Los Angeles; San Francisco and Chicago. Perhaps the most famous pre-Stonewall queer uprising occurred in 1966 at Compton’s Cafeteria, a 24-hour eatery in San Francisco’s Tenderloin. One summer night, as the cops began manhandling a queen, she threw coffee in his face and a riot immediately broke out. Perhaps 50 or 60 patrons overturned tables and smashed windows and beat the police with heavy purses.

To the historian Mack Friedman, the Compton’s Cafeteria riot represented “an expression of pangender sex worker unity in the face of an affront.” Yet the role played by full- or part-time prostitutes is often forgotten in the thumbnail histories of these uprisings.

Sex workers participated in nearly all of the iconic queer uprisings of the era. Indeed, they helped create the conditions that made such uprisings possible. In San Francisco, for instance, a group of street youth — largely trans and queer kids, many of whom sold sex in the Tenderloin — came together in 1966 to form a new organization called Vanguard. By publishing a revelatory newsletter, meeting with city officials and organizing actions, marches and speeches, members of Vanguard raised awareness about the conditions faced by those on the streets. As the historian Laura Renata Martin has noted, for “Vanguard, resistance to the criminalization of sex work and police targeting of sex workers was woven in with resistance to harassment based on gender expression and sexual identity.”

Many Vanguard members took part in the uprising at Compton’s Cafeteria. Though the group dissolved the next year, its members remained active in local campaigns to combat homophobia, transphobia and the mistreatment of sex workers, and they contributed to a revolutionary spirit and discourse in San Francisco during these years.

As the historian Susan Stryker has argued, transgender women—among the most marginalized members of the queer community—were often the instigators of the uprisings. Trans women had remarkable trouble finding employment or housing in this era, which left them inordinately vulnerable to police harassment or abuse, forced many to sell sex at one point or another, and eventually led many of them to rebel.

Which brings us to Stonewall.

“The story of one June night in 1969 in Greenwich Village often doesn’t mention how the outlaws and outcasts who patronized the Stonewall Inn made their living,” the historian Melinda Chateauvert has commented. But many of the queers who threw bottles, bricks and garbage at the police that night were hustlers, hookers and other sex workers. Indeed, Marsha P. Johnson and Sylvia Rivera — two trans women of color who have both been credited with throwing the proverbial “first brick” at Stonewall and who are being honored for their activism with a new monument in New York City — had sold sex. The work was “the only alternative that we have to survive because the laws do not give us the right to go and get a job the way we feel comfortable,” Rivera once said. According to Johnson, it was possible for trans women to hold down “straight” jobs at this time, but only if they hid who they were: “I think it will be quite a while before a natural transvestite will be able to get a job,” she once said, using the parlance of the time. Yet, for some, sex work could also be a means of asserting one’s personhood. “[W]hen I go out to hustle I don’t particularly care whether I get a date or not,” Johnson remarked. “If they take me, they got to take me as I want ’em to take me.”

In the years following Stonewall, Rivera and other sex workers united in the Gay Liberation Front and Street Transvestite Action Revolutionaries, from which they launched organizing campaigns to combat discrimination, demand acceptance of gender and sexual nonconformity, and ultimately call for the overthrow of capitalism.

Yet the erasure of sex workers from Stonewall began almost immediately. As early as 1973, noted Chateauvert, “Rivera had to fight to speak at the gay pride rally celebrating Stonewall because the crowd didn’t want to hear from a transgender sex worker.” As mainstream LGBTQ rights organizations gained respectability, these movements distanced themselves from their sex-worker pioneers. Only in the last couple years have several of these groups begun cautiously embracing calls for decriminalization, but even that remains tentative.

A full accounting of the history shows what such an approach is missing. The uprising at Stonewall was a fight for the rights of trans people, gender-nonconforming people, queer people of color, homeless queer people—and queer sex workers. Modern LGBTQ right activists owe sex workers a debt. Repaying it will mean making sex-workers’ rights a policy priority, making sure that today’s organized activism is inclusive of their presence, their needs—and their history.

Scott W. Stern is the author of The Trials of Nina McCall: Sex, Surveillance, and the Decades-Long Government Plan to Imprison ‘Promiscuous’ Women. 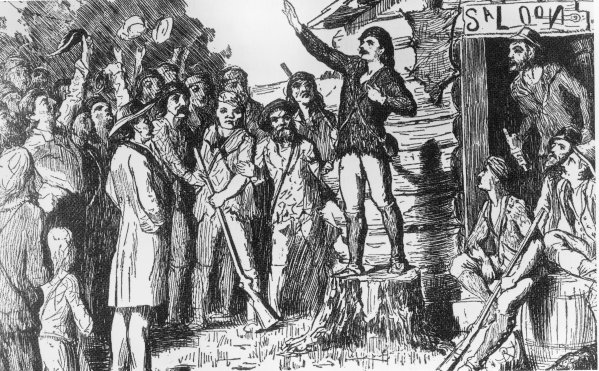 Even the Internet Hasn’t Really Changed How Being Famous Works. Here’s Why
Next Up: Editor's Pick