Dr. Albert Abrams of San Francisco, who claimed to have developed blood test to settle paternity cases, in 1921
Bettmann/Getty Images
By Nara B. Milanich

In 2017, consumer DNA testing exploded, with more people purchasing home testing kits than in all prior years combined. Such growth is possible thanks to scientific advances and the rise over the past two decades of a direct-to-consumer testing industry. But while scientific research can take credit for the former, the media played a key role in the latter, by inventing something perhaps even more potent: paternity testing as a cultural phenomenon.

The press’ fascination with the science of ancestry began long before such DNA tests were available. In the 1920s, researchers began to explore the development of genealogical tests — research that, not coincidentally, occurred in an era of burgeoning interest in eugenics and racial pseudoscience.

Researchers were particularly taken with the possibility that science could discover an unknown father. A variety of new methods emerged in these years that promised to do just that. Some were patently pseudoscientific, such as the oscillophore, a machine invented by Dr. Albert Abrams, a San Francisco doctor who purported to reveal an individual’s ancestry by measuring the electronic vibrations of their blood. Other methods had more validity but were still very rudimentary, such as the testing of parentage through inherited ABO blood types.

The press was transfixed by the new tests. It followed salacious cases like that of James A. Stillman, the fabulously wealthy president of National City Bank of New York, who charged that his wife’s fourth child had been fathered by their groundskeeper. Would the parties request a test? What would it show? Stories of divorce, adultery and illicit affairs were a mainstay of the press in the roaring 1920s, and questions surrounding paternity testing became integral parts of these stories.

The papers explored such questions in relation to other kinds of sensational cases as well. In the summer of 1930, a baby mix-up in a Chicago hospital dominated the nation’s headlines. The press eagerly followed the two sets of bereft parents, their disputed infants—and the panel of 11 scientists appointed to solve the riddle (“Baby Shuffle Still Puckers Sages’ Brow; but Science Hopes to Solve Problem”). As novelists and playwrights had long known, mysteries of identity were the stuff of melodrama. In the 20th century, the mass media began to tell those stories to a fascinated public. It also introduced a new protagonist: the scientist. Science was not just a means to solve the puzzle. It was a central character, an exciting part of the story itself.

The press also helped make the very news it was reporting. Dr. Abrams was summoned by a San Francisco judge to weigh in on a case of a husband who disputed paternity of his wife’s baby. The papers announced his verdict: “Court Establishes Parentage of Baby by Electric Blood Test.” The headline was not exactly fake news, but it wasn’t entirely true either. The judge had ruled that the husband was the father, as the blood test showed, but, based on what we know about contemporary debate about Abrams’ device and California’s legal code, it is likely the judge decided the case on the basis of the traditional legal presumption that husbands are the fathers of their wives’ children.

That detail was lost in the coverage, however. The newspapers implied not only that Abrams’ miraculous oscillophore was legitimate but that its validity had been certified by a judge on the California Superior Court.

Press coverage didn’t just distort the legal part of the story; it often garbled the scientific one too. In a 1921 article on “blood tests” as “love tests,” the Atlanta Constitution explained to readers the theory of George [sic] Mendel: “the odd numbered children of a family are supposed to be dominated by the parent whose sex is their own and the even numbered children by their opposite parent.” The press played a pedagogical role, explaining exciting new techniques to its readers. Its lessons weren’t always accurate, but they shaped public attitudes nonetheless.

On the basis of press accounts, lawyers and litigants began to clamor for scientific tests of identity. In Lamont, Okla., (population 585), a mother wrote to Dr. Abrams. “I see by the papers that you can test blood and wondered if you would help me.” As in the Stillman and San Francisco cases, her estranged husband refused to recognize her 3-month-old daughter, and she implored Abrams to help her. In covering these new scientific developments, the press had not only shaped the perceptions of the curious but suggested solutions that were actively sought out by the desperate.

Fast forward to the dawn of DNA. Today the technology may be radically different from the oscillophore or rudimentary blood type tests, but the dynamics of science, law and the media remain strikingly similar.

For example, in the early 1980s, a British lawyer read in the newspaper about a new technique, DNA fingerprinting, that could identify an individual’s parentage with an extremely high probability. The technology was untested in the courts, but the lawyer immediately thought of her clients, a woman whose son had been blocked from entering Britain when officials questioned the relationship between them. The new DNA technique soon proved their kinship claim to be true. Faced with these results as well as a preponderance of circumstantial evidence, the Home Office punted, conceding this particular case but making no judgment about the validity of the new DNA method.

That was not, however, the story the papers told. As in the case of Abrams’ oscillophore more than a half-century earlier, the press reported that the all-powerful new test had been decisive in resolving the case. Thanks in large part to that coverage, the technique gained instant public legitimacy.

Today the use of DNA to prove identity has become common forensic practice, even as recreational ancestry testing has blossomed into a multi-billion dollar industry. Commercialization has only tightened the relationship between genetic testing and the media. Those “who’s your daddy” reality TV shows? Biotech companies have formed partnerships with them to market their tests.

People remain fascinated by intimate secrets and the role of science in revealing them: the unsuspecting tester who discovers an unknown sibling; the one who discovers that a sperm donor — not her father — is her biological progenitor; the countless stories of people whose tests reveal an ethnic or racial identity distinct from the one with which they identify.

In telling these stories, the media continues to influence how we think about these technologies, and how we use them. It advances the tests by teaching the public how they work (with greater accuracy, one hopes, than in the past) and by making them appear ubiquitous and authoritative. Perhaps most importantly, it promotes the idea that they will tell us something not only useful but also surprising and exciting about ourselves. The result is that an estimated 1 in 25 Americans has had their DNA tested. If ancestry tests emerged from the laboratory, it is the media that, over the last hundred years, has made them into the deeply alluring cultural phenomenon that we know today.

Nara Milanich is a professor at Barnard College and author of PATERNITY: The Elusive Quest for the Father (Harvard University Press; on sale June 10) 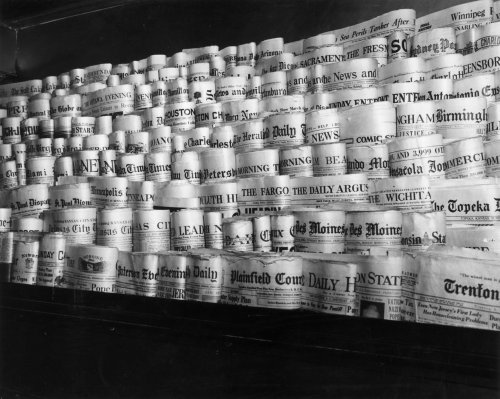 How True-Crime Stories Reveal the Overlooked History of Pre-Stonewall Violence Against Queer People
Next Up: Editor's Pick