For super-fans of a musician, actor, or any celebrity, there’s nothing like meeting the object of their fandom. At concert meet and greets, premium ticket-holders get a chance before the show to shake the hand of the artist they are seeing perform live. Normally, this goes quickly: people say a quick hello, snap a picture for social media, and walk away, in a matter of 15 seconds. But the atmosphere at a New York stop at Aly & AJ’s Sanctuary Tour is different.

The sisters are unusually attentive to the assembled fans, having real conversations and spending time talking to each person. Part of that is just who they are; part of that is that they’re promoting more than their music on this tour. Namely, they’re supporting causes: HeadCount, an organization that helps people register to vote; project HEAL, which aids people recovering from eating disorders; and the Trevor Project, which supports the LGBTQ community. Aly & AJ have been releasing killer pop songs for well over a decade. Now, they’re activating their fans to make the world a better place.

The sisters, born Alyson (“Aly”) and Amanda (“AJ”) Michalka, have been in the spotlight since the early 2000s, from their work on the Disney Channel and a deal with Hollywood Records, Disney’s partnering record label. Their first album, Rush, was released in 2005, followed by two more albums with the label. After leaving the Disney fold, the girls continued acting; Aly now stars on The CW’s iZombie, and AJ stars in the hit ABC show Schooled. On the music side, they set Aly & AJ aside for several years, briefly performing as the band 78violet. In 2017, the girls regrouped as Aly & AJ and put out an EP, Ten Years, titled for the decade since they’d last released music under that name. Their newest EP, Sanctuary, was released in May, with a video for one of its songs, Star Maps, out June 12.

The name Sanctuary, after a song from the EP, was chosen carefully. “It’s not only a song for our fans, but I also know from the fans that we’ve met at the show that they feel like we are their sanctuary,” explains Aly. “AJ and I get a lot of peace and comfort and reassurance that this is what we’re supposed to be doing because of the great energy that we get from the crowd.” It’s a way of speaking to the camaraderie in the crowd, where fans save spots for new friends they’ve made while waiting for the show to start.

Part of that comes from their commitment to their causes, which is an integral part of their public mission. Aly says Project HEAL “was introduced to us by a dear friend who is a survivor of struggling with an eating disorder, and has been in recovery for years now… [we] were so touched by how vulnerable she was being about her story.” They’ve since raised 108% of their goal to donate to Project HEAL, which goes towards funding treatment-related expenses. “If we can shine some light on it in some way,” says Aly, “maybe we can help save someone’s life.”

They also began supporting an organization called Headcount, which helps register voters, in the run-up to the 2018 election. “Midterms were around the corner,” AJ says. “It was very important that Aly and I made sure our fans were ready to register to vote. If we even got like ten people to register to vote, or even one, that’s enough.”

The Trevor Project is more personal to them: Another close friend, YouTube personality and activist Raymond Braun introduced them to the work the Trevor Project does around helping queer youth. “We are huge LGBTQ allies and so we wanted to team up with them and bring them out on the road this tour,” Aly says. “We were blown away by the fact that they had this hotline that was twenty-four hours accessible.”

The girls’ support of LGBTQ issues has become so much a part of their work that some of their older songs have taken on new meaning for fans. Songs like “Rush,” “Like Whoa,” and “No One,” from the mid 2000s, are now viewed as gay empowerment songs, like a lyric from “Rush”—”Be every color that you are”—that they now print on a T-shirt because the lyric has resonated so deeply with fans. The same is true of their newer song “Good Love,” which was released last June, during Pride Month. ”It’s an amazing rapport we have with our fans,” says AJ. “When a song like ‘Good Love’ starts, they kind of try and toss [pride flags] to us [so] we can use it on stage.”

Female empowerment was always a message in their music; one of their best known songs from the 2000s is “Potential Breakup Song,” which is “kind of a feminist song, when you think about it,” Aly says. “It still feels very relevant today.” In their new era, they’re working with even weightier themes: “Star Maps,” from Sanctuary, was written about the #MeToo movement. “We wanted it to be a song that, when you listen to, it you wouldn’t know it was necessarily written about that, that you could still enjoy the song and maybe see some other version of the story in your head,” explains Aly. Still, their goal was to write a song that was clearly about “this person [who] came with good intentions and was hopeful for the future and just got taken advantage of. And they were not at fault—it was the abuser’s fault.”

Tackling subject matter like this is important to them, because they hear often about how their openness has helped their fans to stay positive—and even to stay alive. “I’m always left speechless by it,” Aly says. “AJ and I just met someone a few shows ago who mentioned that she is here because of AJ and I—which is just incredible.”

“Each show feels like a love letter—every time we perform, we’re getting so much back,” says AJ. “The love we’re receiving from [the fans] is just as mega.” 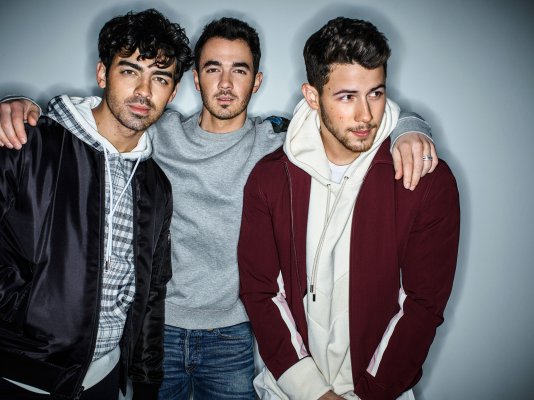 How the Jonas Brothers Grew Up and Got Cool
Next Up: Editor's Pick