CBD Is Already Everywhere. How Will the Government Handle It?

The cannabis plant contains more than 100 compounds known as cannabinoids. Of them, one–cannabidiol, or CBD–presents the U.S. with unique potential in public health and business, as well as a good deal of political and legal confusion. That much was clear at the Silver Spring, Md., campus of the Food and Drug Administration on May 31, as over 120 people spoke to a standing-room crowd at the agency’s first public hearing for information about cannabis-derived products–a number that was whittled down by lottery from the 400 who applied to testify.

Backers say CBD has health benefits ranging from curing insomnia to relieving joint pain. Those claims remain unproved, but the CBD business in the U.S. has nevertheless tripled in the past three years; analysts project the industry will be worth over $20 billion by 2022. But it occupies a legal gray area: local laws on cannabis apply to the compound, but thanks to hemp-friendly provisions of the 2018 Farm Bill, CBD products are generally legal if they’re derived from hemp from a licensed grower and contain 0.3% or less of THC (a cannabinoid that, unlike CBD, can get you high). The compound can be found in products from gummies to muscle rubs, available online and maybe even at your local bookstore or burger joint.

And now the politics seems to be lining up behind it too. The farm lobby has been making its case–some two-thirds of U.S. hemp farming is in service of CBD–and both houses of Congress have issued letters telling the FDA it needs to change its approach to regulating the substance, given that the marketplace has already exploded.

The agency was set on a collision course with CBD last summer, when it approved GW Pharmaceuticals’ prescription drug Epidiolex, which contains lab-synthesized CBD, for the treatment of a form of epilepsy. This creates a quandary: though commercially available CBD products are not the same as Epidiolex, many are marketed as having the same amount of CBD. But by law, FDA-approved medicines can’t also be sold as dietary supplements or food additives. That means, in theory, the agency could enforce a ban on all those gummy bears and other edible CBD products currently on the market.

Yet the FDA hasn’t stopped the CBD boom, which leads many to believe it considers the compound safe, if not necessarily beneficial. The World Health Organization has stated that “no public health problems have been associated with the use of pure CBD,” and a mounting body of peer-reviewed evidence suggests the same.

So why not classify CBD as “generally recognized as safe,” like vitamin B12 or caffeine? Some analysts think the FDA is concerned about protecting the integrity of its drug-approval process. “If the FDA just said, ‘Never mind, we’ll make all CBD legal to be marketed as a dietary supplement,’ it would be a disincentive for pharmaceutical companies to continue to do clinical research and trials,” says Rod Kight, a North Carolina–based lawyer who represents CBD companies nationwide. An FDA spokesperson confirmed to TIME that the agency is “interested” in how the incentives for the development of cannabis-derived drugs could be affected if “the commercial availability of products with these compounds, such as foods and dietary supplements, were to become significantly more widespread.”

So the likeliest way forward may be a bifurcated path. On the first, more exclusive, route will be Epidiolex and other lab-made prescription drugs. Lining the other byway will be a bazaar of hemp-derived products–the gummies and muscle rubs. GW Pharmaceuticals, for one, has said it supports this model. “It’s already too late to put this genie back in the bottle,” Dr. Peter Lurie, head of the Center for Science in the Public Interest, says.

Even once the agency makes a decision, dealing with the genie will be difficult–and likely to get more so as the industry grows. If the FDA regulates CBD as a supplement, it can issue guidelines on things like ingredient concentration and child-proof packaging. But its hands are tied by the fact that the companies don’t have to tell the agency exactly what they’re making. Sometimes they don’t even tell customers. A 2017 study found that 26% and 43% of CBD products tested had lower and higher amounts of the compound, respectively, than were listed on their labels. And while the FDA has taken some action against CBD manufacturers making specific condition-related health claims, many companies are still unabashedly marketing their products as curatives for particular illnesses.

“The agency is charged with regulating a marketplace where it doesn’t know what’s in the market,” says Lurie, who spent nearly eight years working in the FDA. That can’t be especially reassuring for GW Pharmaceuticals, which invested a small fortune in playing by the rules, or for consumers. It may also be a while before the FDA acts. The agency wouldn’t comment on a timeline, but Kight says he’s heard it might take up to three years to issue regulations. “This industry has gone from zero to where it is now in three years,” he says. “Where it’s going to be in three more years is hard to even imagine.” 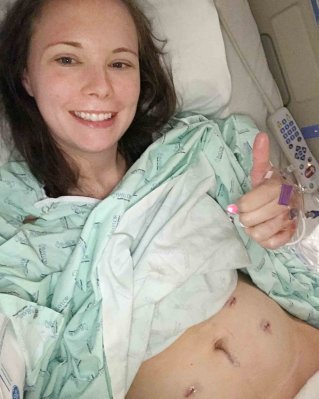 I Love Being a Mom. So I Donated My Uterus to Help Someone Else Become One
Next Up: Editor's Pick