Dark Phoenix Tries to Correct the Errors of X-Men: The Last Stand. Does It Succeed?

Warning: This post contains spoilers for X-Men: The Last Stand and Dark Phoenix.

Fairly or not, X-Men: The Last Stand (2006) is one of the most maligned superhero movies in recent history. Following on the heels of the excellent X2: X-Men United, The Last Stand failed in both fans and critics’ eyes when it flubbed one of the X-Men’s best storylines: Jean Grey turning into the Dark Phoenix. In that movie, the Dark Phoenix saga was more of a footnote to a story about a conflict over a “cure” for mutants.

Simon Kinberg, who wrote the film, recently told the Los Angeles Times, “My biggest regret from The Last Stand is that the Dark Phoenix story, which is the most enduring story in the history of this very esteemed saga, was given a back seat in the movie. So when I reset the timeline, I was absolutely conscious that what that would allow us to do is tell the Dark Phoenix story again.”

Kinberg has offered Dark Phoenix, the latest X-Men film which he wrote and directed, out June 7, as a corrective to the missteps of The Last Stand. But does Dark Phoenix succeed in that mission? The short answer: no, not really. Here’s everything you need to know about why the Dark Phoenix saga is so important and so difficult to properly render onscreen.

Marvel introduced the Dark Phoenix saga in the comic books in 1967. At that point, while female heroes like Wonder Woman, the Wasp and Sue Storm populated comic books, they tended to be more passive and pacifist than their male counterparts. But in the Dark Phoenix line, Jean Grey becomes the most powerful and terrifying force in the universe. The storyline immediately became a fan favorite thanks to its simple premise: What if this hero became corrupted by her power and turned into a villain?

In the comics, Jean Grey merges with a cosmic entity known as the “Phoenix force” but struggles to control her newfound power. A villain called Mastermind hypnotizes and enslaves Jean, manipulating her mind and body, even dictating what she wears. Eventually, Jean breaks free of Mastermind and used her immense powers to turn his brain into mush. We as readers cheer her on. But then she flies off into the galaxy, gets hungry and consumes a star, destroying an entire solar system and killing 4 billion peace-loving aliens in the process. Suddenly, Jean is a villain.

The president asks the Avengers to fight the now-genocidal Jean, but it’s Professor X who eventually channels The Exorcist and banishes the Dark Phoenix entity from Jean’s body. In retrospect, the patriarchal (and often patronizing) figure of Charles Xavier trying to tame Jean is complicated, to say the least. But Jean goes back to her old self for a bit, carrying on her romance with Cyclops. And eventually Jean decides her own fate. The alien family members of those killed by Dark Phoenix’s actions want Jean dead. The X-Men fight them on the moon, during which Jean turns into Dark Phoenix one the last time to kill herself and save the universe from the Phoenix’s power.

In the end, the story is a tragedy in which a hero must face the consequences of her actions — a foreign concept to most corporate superheroes at the time and one that’s arisen on the big screen throughout the 2010s with the the city-destroying Avengers and Justice League heroes. It was darker and weirder and more profound than most of what had appeared in comics before.

The X-Men animated series adapted the storyline in the 1990s, but network mandates prevented them from depicting Jean committing a genocide. Producers also forbade the writers from actually killing off Jean at the end. So in this version, Jean does sacrifice herself, but then a light in the form of a bird emerges from her body and tells the X-Men they can save her life. Cyclops kisses her and she’s resurrected, a la Sleeping Beauty.

Cyclops’ hero moment undercuts Jean’s sacrifice a bit, which is a bummer. It’s a less satisfying ending though it presaged the problems in adaptations to come: Jean can be evil, but not too evil. The final fight can be weird, but not too weird.

X-Men: The Last Stand relegated the Dark Phoenix to a subplot

X-Men (2000) and X2: X-Men United (2003) became huge hits in part because they were grounded in reality: Yes, the X-Men had mutant abilities but they were contending with real-world problems like bigotry. But the Dark Phoenix saga is anything but grounded. Again, the original storyline ended with a fight with an alien race on the moon. It’s also dark: The central hero has to kill herself to save the world.

When it debuted, X-Men: The Last Stand was the most expensive movie ever made, with a $210 million budget. Anything too bizarre or too tragic felt too risky for Fox’s execs. (Remember this was before Christopher Nolan embraced the darkness of the Dark Knight in his Batman films, altering superhero movies forever.)

The studio was likely also concerned about making a movie with a sole female lead. Catwoman and Elektra had each flopped in the previous two years (though both were also bad movies). It would be another decade before Wonder Woman graced the big screen and proved that female superheroes could make bank if they were just allowed a compelling story. A movie that centered on Jean Grey was out of the question. According to the screenwriters’ own account, the studio mandated that they introduce a second storyline into the script.

So X-Men: The Last Stand makes Jean’s story the B-plot. Early on, Jean, played by Famke Janssen, wreaks havoc, killing both Cyclops and Professor X (the latter because he messed with her brain to suppress the Dark Phoenix persona that was inside her all along). But then she becomes a glorified stooge to Magneto and disappears for much of the third act.

She returns at the end, but instead of determining her own fate and sacrificing herself, she’s killed by Wolverine who then must struggle with the guilt of murdering the woman he loved. Her storyline is subsumed by his emotional struggle. (It’s impossible to separate the anti-feminist reputation of this movie from the fact that it was directed by Brett Ratner, who has since been accused of serial sexual harassment and assault, allegations which he has denied.)

To the film’s credit, Dark Phoenix is Jean Grey’s movie. It begins with her accidentally killing her mother in a car accident and ends with her sacrifice to save the X-Men. But the movie fails when it comes to her emotional development.

The first hour of Dark Phoenix essentially plays exactly like The Last Stand, minus all the stuff about a cure for mutants. Jean Grey, played by Sophie Turner, becomes the Dark Phoenix (by being hit by an energy beam in space, rather than the Phoenix emerging from inside her). She finds out that Xavier messed with her mind in order to ostensibly protect her. (This time he hides the fact that her father did not want to care for her after a car crash that killed her mother.) And she confronts the other X-men at her childhood home, killing a hero in the process. (This time it’s Jennifer Lawrence’s Mystique, and her death is an accident — more on that later.)

There’s a certain girl-power sheen to this movie that winds up flattening the female characters rather than rendering them as complex, realistic beings. The effort to embrace women’s abilities mostly manifests in lame lines like “the women are always saving the men around here; you might want to think about changing the name to X-Women,” spoken by Jennifer Lawrence’s Mystique. It’s meant to elicit cheers, but it simply nods at the historical problems of the franchise without actually confronting them.

In fact, there are several issues with the portrayal of women in this film. Mystique gets killed in the first act — presumably because she wanted out of this franchise. But from a plot perspective, her death is there to motivate two different men who were in love with Mystique (Magneto and Beast) to seek vengeance against Jean. In comics terms, the death of a female character used to simply to motivate men is called fridging. It’s exactly what’s happening here. Meanwhile, the movie shies away from seriously interrogating why Professor X manipulated Dark Phoenix’s mind — in effect gaslighting her — which arguably makes him not just hubristic but an outright misogynist.

But the biggest misstep is the treatment of the Dark Phoenix persona: This Jean is not corrupted by power, but simply can’t control it. That makes her more of a damsel than an anti-hero. That interpretation might work if the script were stronger. Turner tries her best to portray the inner conflict but is left uttering canned lines. “My emotions make me strong,” she declares towards the end of the film after being challenged by Jessica Chastain’s evil alien automaton, who only appears to be in this film so the X-Men have someone to fight at the end.

The line about emotions is eerily similar to one uttered by Captain Marvel earlier this year. (Dark Phoenix reportedly had to be reshot because of similarities to another superhero movie ending, presumably Captain Marvel.) When Carol Danvers (Brie Larson) said this to her negging tutor (as played by a sufficiently creepy Jude Law), it carried weight for a character who spent the entire film struggling to find the balance between her human capacity for emotion and her mentor’s insistence that she suppress her capacity for empathy. Why screenwriters insist on associating female power with emotions is a question for another day, but Captain Marvel handily dealt with the dated notion by essentially rolling its eyes at its misogynist critics. Just as Law launches into a patronizing speech, Captain Marvel dispatches him with ease and a touch of sarcasm.

Dark Phoenix’s take is noticeably more retrograde. It takes the notions that women have emotions, and that that’s a good thing, deadly seriously. And yet we as an audience have no idea what Jean’s emotions even are at the moment she utters this line since she’s had no real emotional evolution in the movie. It — like the rest of the movie — feels like an empty girl-power mantra. 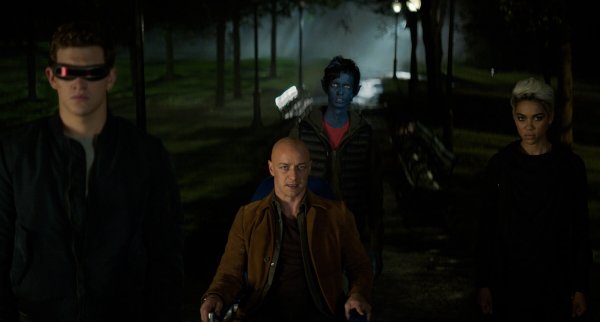 What's Next for the X-Men After Dark Phoenix?
Next Up: Editor's Pick