Jeopardy! Champion James Holzhauer Lost Before He Could Break the Show's Biggest Record

James Holzhauer’s historic run on Jeopardy! has come to an end.

The Jeopardy! champion, who gained national fame for winning through a specific money strategy, lost in the Final Jeopardy round in the latest episode of the quiz show, which aired Monday.

Holzhauer set multiple records on Jeopardy!, including for the most money won in a single episode. And he was set to hit one more milestone: beating the $2.52 million won by Ken Jennings during his record 74-game streak in 2004.

But in Monday’s episode, Holzhauer ended his 32-game streak when he lost to Emma Boettcher, an academic librarian, who beat him by $20,002 in the Final Jeopardy round.

Holzhauer was only $58,484 short of breaking Jennings’ record.

Holzhauer correctly answered the Final Jeopardy question: “The line ‘A great reckoning in a little room’ in As You Like It is usually taken to refer to this author’s premature death” and the answer is “Who is Kit Marlowe?” His unusually low wager of $1,399 took him to a total of $24,799. This was short of Boettcher, who bet $20,201 to win with a total of $46,801.

Holzhauer high-fived Boettcher immediately after, while the typically neutral host Alex Trebek said, “What a game! Oh my gosh!”

Holzhauer approached the rest of the game with his signature strategy, going after the big-dollar clues at the bottom of the board first, and landing a Daily Double in his first pick. Boettcher followed a similar plan, choosing from the bottom up, and eventually scoring a lead over Holzhauer. By the time they reached Final Jeopardy, Boettcher had won $26,300, while Holzhauer had $23,400.

Footage of Holzhauer’s loss was leaked Sunday and spread around the internet before the episode aired. Holzhauer spoke about the loss to the New York Times and alluded to it in a tweet before Monday’s episode.

“Nobody likes to lose,” he told the Times. “But I’m very proud of how I did, and I really exceeded my own expectations for the show. So I don’t feel bad about it.”

Asked about the leak, Jeopardy! representatives did not immediately respond to a request for comment. 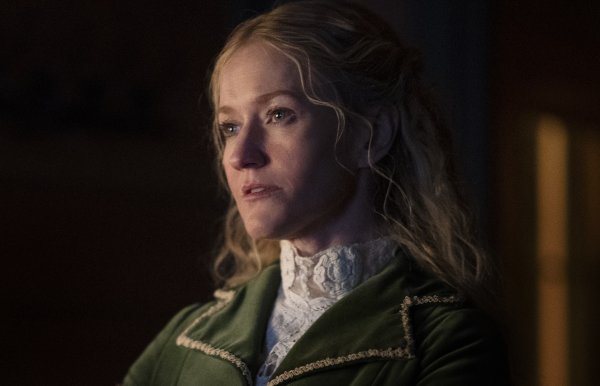 If You Want to Know Why Deadwood Is a Classic, Look to Its Women
Next Up: Editor's Pick