The Constitution sets a high bar for treason charges. But Donald Trump has used a much lower standard, using the term to describe his critics and people investigating his Administration.

Concerned about abuse of treason charges under English monarchs, the framers of the Constitution limited it to waging war on the United States or giving its enemies aid and comfort. As a result, only about 30 treason trials have been held since 1789.

Trump’s own Administration has argued that the term shouldn’t be used loosely, criticizing former Trump adviser Steve Bannon for using it to describe Donald Trump Jr.’s conduct and a New York lawmaker for using it against Hillary Clinton.

But as president, Trump has thrown the term around on several occasions.

Not clapping at his State of the Union address

In February of 2018, Trump said that Democrats who did not clap at his first State of the Union address were “like death and un-American,” musing that they could be called “treasonous.”

“You’re up there, you’ve got half the room going totally crazy wild, they loved everything, they want to do something great for our country, and you have the other side even on positive news, really positive news like that, they were like death and un-American,” he said at a factory in Cincinnati. “Un-American. Somebody said treasonous. I mean, yeah, I guess, why not. Can we call that treason? Why not? I mean they certainly din’t seem to love our country very much.”

In September of 2018, he used it to describe the New York Times for publishing an anonymous op-ed from a member of his Administration, arguing that it was “virtually” treason.

“Number one, the Times should never have done that, because really what they’ve done is virtually, you know, it’s treason, you could call it a lot of things,” he told Fox & Friends.

Not supporting his immigration proposals

In April of 2019, Trump used it to describe Democrats for opposing his immigration and border proposals.

“I think what the Democrats are doing with the border is TREASONOUS,” he tweeted. “Their Open Border mindset is putting our Country at risk. Will not let this happen!”

Investigating his campaign’s contacts with Russia

In April of 2019, he used it to describe investigations into his 2016 campaign’s contacts with Russia and Democratic lawmakers’ response.

“You know, when the Democrats go behind the scenes and they go into a room backstage and they sit and they talk, they laugh because they know it’s all a big scam, a big hoax,” he told reporters. “And it’s called politics, but this is dirty politics and this is actually treason. This is a very bad thing that people have done.”

The White House has defended some of Trump’s use of the term, arguing that he was joking. “The President was clearly joking with his comments,” White House spokeswoman Sarah Huckabee Sanders argued after the State of the Union comments. “But what isn’t a joke is that Democrats refuse to celebrate the accomplishments of last year that has helped all Americans.”

She also criticized Bannon after he was quoted saying the Trump Tower meeting with a Kremlin-connected lawyer was “treason.”

“I would certainly think that going after the President’s son in an absolutely outrageous and unprecedented way is probably not the best way to curry favor with anybody,” Sanders said.

Her predecessor, Sean Spicer, also condemned New York lawmaker Al Baldasaro, who said that Hillary Clinton should be shot for treason for her handling of Benghazi.

“I don’t think that we should be resorting to that kind of language with respect to anybody in our country,” he said. 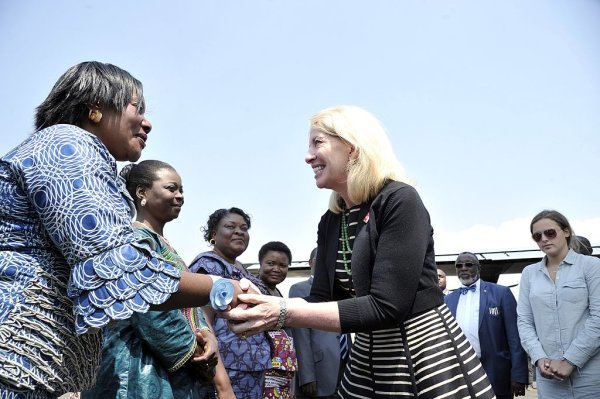