Republicans have long sought to scrap the U.S. Department of Commerce. Texas Sen. Ted Cruz, former Ohio Gov. John Kasich, longtime Rep. Ron Paul and former Texas Gov. Rick Perry have all called for cutting or eliminating it, as have the conservative Heritage Foundation and the libertarian-oriented Cato Institute.

You can now add Sen. Elizabeth Warren to the list.

In a Medium post published Tuesday morning, the Massachusetts Democrat outlined an economic agenda that includes “consolidating existing government programs that affect job creation” by replacing the Commerce Department with a new Department of Economic Development that aims to create and protect sustainable jobs.

The Commerce Department is an amorphous government body tasked with promoting job creation and economic growth. It houses the Census Bureau, the Bureau of Economic Analysis and the Patent and Trademark Office and oversees miscellaneous governmental bodies like the National Oceanic and Atmospheric Administration and the Committee for the Implementation of Textile Agreements.

Warren’s Department of Economic Development would absorb all trade-related programs and some of the business-related agencies under the existing Commerce Department. It would also compile a National Jobs Strategy every four years in order to identify new economic risks and opportunities, her Medium post says.

“It will focus not just on the overall American economy, but on regional economies. It will examine trends that have disproportionate effects on rural communities and smaller cities. And it will establish clear goals for American jobs and American industry that will guide how the Department of Economic Development prioritizes its investments and direct its programs,” Warren writes.

Unlike plans put forward by Cruz and Perry, who hoped to scale back the size of the federal government, Warren’s plan is focused more on increasing worker protections by grouping programs that help them under a single agency.

Former President Barack Obama presented a similar proposal back in 2012, when he tried to eliminate the Commerce Department in favor of a broader organization led by a Secretary of Business. That plan fizzled because it was “not a priority,” a former White House chief of staff told Politico at the time.

Warren’s economic agenda includes encouraging manufacturers to produce their goods in the United States by leveraging federal research dollars, investing $20 billion into apprenticeship programs for the next ten years, and requiring the federal government buy American-made products, whenever possible.

Warren says she’ll expand on her broader economic patriotism plan — which includes establishing the Department of Economic Development — with specific issue-area proposals, on topics like the environment and trade, in the coming weeks.

A Moody’s Analytics cost-analysis report obtained by TIME indicates a substantial portion of this proposal’s costs would be offset by Warren’s plans to strengthen corporate tax rules and end federal oil and gas subsidies, though it estimates the 10-year budget deficit would still increase by about $100 billion.

Warren argues it’s worth the investment in a separate Medium post also out on Tuesday. “With big and bold investments in American research, American industry, and American workers, we can lead the global effort to combat climate change — and create more than a million good jobs here at home,” she writes.

Warren’s proposal to create the Department of Economic Development is not the first time she has sought to reshape the executive branch.

Back in 2007, Warren argued for the creation of a federal agency that would protect consumers from predatory financial practices. A couple years later, she played a major role in forging that idea into the Consumer Financial Protection Bureau after the 2008 financial collapse proved the industry required stricter regulations.

Two years ago, that bureau reported it had secured about $12 billion in relief for 29 million customers since it opened in 2011. 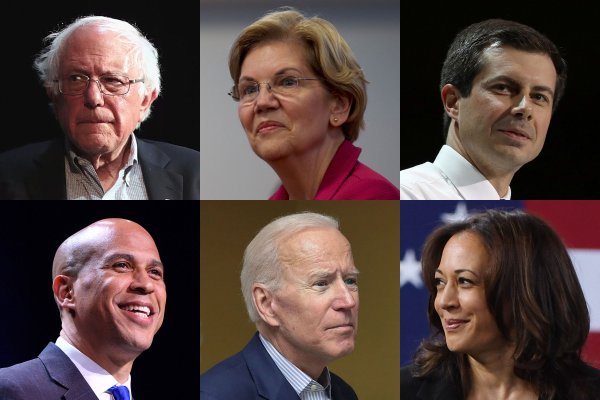 Think You Can Name Every Democratic Candidate for President? Prove It
Next Up: Editor's Pick