Two transgender activists and key figures of the 1969 Stonewall riots will be honored with a monument dedicated to them in New York City, officials announced Thursday.

Widely considered to be pioneers of the LGBTQ rights movement, the Associated Press reports that Sylvia Rivera and Marsha P. Johnson will be commemorated by a monument in Greenwich Village nearby the Stonewall Inn bar, which was raided by police in the early hours of June 28, 1969. The riots that ensued between members of the LGBTQ community, who comprised the majority of the bar’s patrons, and police are widely credited as a pivotal movement that helped ignite the modern gay rights movement in the U.S.

Sylvia Rivera, who was Latina, and Marsha P. Johnson, who was black, were two transgender activists living in New York at a time when the LGBTQ community faced significant oppression. Homosexuality was illegal in many states across the U.S. in the 1950s and 1960s, and in New York, gay or gender non-conforming people faced the possibility of arrest. Both known as “drag queens,” close friends Johnson and Rivera identified as women, and were seen as “mothers” to the marginalized LGBTQ youth living on the streets of the city. The pair co-founded an organization called STAR in 1970, standing for Street Transvestite Action Revolutionaries dedicated to members of the community (the term “transgender” was not used widely at the time).

Several accounts place Rivera and Johnson at the forefront of clashes with the authorities at Stonewall, which marks its 50th anniversary this year. Part of an initiative by New York City to increase diversity of the city’s public artworks, an artist has not yet been commissioned to create the monument. The city says it will be one of the world’s first such dedications to transgender people, and is expected to be completed by the end of 2021, according to the New York Times. 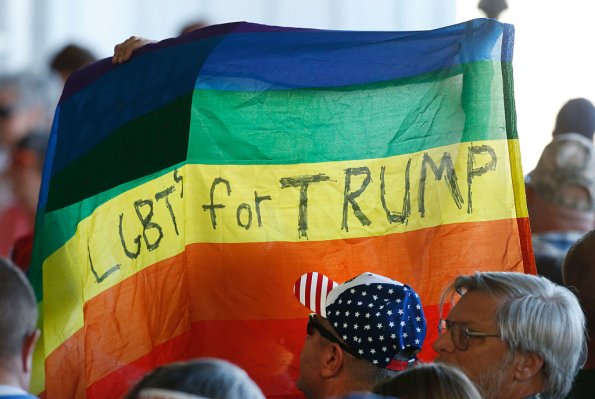 Trump's Broken Promise on LGBTQ Rights
Next Up: Editor's Pick