Southeast Asia Doesn't Want to Be the World's Dumping Ground. Here's How Some Countries Are Pushing Back

The global trash trade has reached a turning point; wealthier nations have long shipped their plastic waste to the developing world to be processed, but in recent months, some nations in Southeast Asia have begun sending the exports — much of it contaminated plastic and trash that is unrecyclable — back to where it came from.

The pushback comes as containers of trash continue to accumulate on the shores of countries like Malaysia, Thailand and the Philippines, which are increasingly worried that the environmental costs are greater than the income they bring in from importing the waste.

Southeast Asia has not always been the world’s dumping ground. For decades, China was the world’s biggest importer of scrap plastic, taking in millions of tonnes of plastic waste as raw materials from countries like the U.S. and the U.K. to fuel a growing manufacturing sector. China imported close to half of the world’s global plastic waste, reaching a peak of nine million tonnes in 2012, according to environmental organization Greenpeace.

But severe pollution as a result of poorly managed waste processes led to a country-wide import ban in January 2018, effectively barring China from receiving the plastic waste it had bought so much of in the past.

The legislation caused a significant shake-up in the global garbage trade. “There was a mass scramble for alternative destinations for waste coming from mainly industrialized countries,” Von Hernandez, Global Coordinator of nonprofit Break Free From Plastic, told TIME.

Whose garbage is it?

The garbage is exported from around a dozen developed countries including the U.S., Canada, France, Belgium, Germany, Spain, the Netherlands and the U.K., according to Greenpeace.

According to the BBC, the European Union is the world’s biggest exporter of plastic waste, while the U.S. is the largest single-country source.

“Richer countries are taking advantage of the looser regulations in poorer countries,” Lea Guerrero, Country Director for Greenpeace Philippines, told TIME. “They export the trash here because it’s more expensive for them to process the mixed, contaminated waste themselves back home due to the tighter laws.”

Where did it go?

Without China to ferry their waste off to, the developing world has taken to exporting their trash to countries in Southeast Asia, where some have lax environmental regulations that make it easier to dispose of the garbage.

Malaysia, Vietnam, Thailand and Indonesia picked up a lot of the slack, with Malaysia emerging as the number one importer. Home to a significant Chinese-speaking population, Malaysia was a logical choice for Chinese recyclers looking to relocate, according to the South China Morning Post.

The country’s imports rose five-fold to about 110,000 tons per month following China’s ban, according to Greenpeace. The three largest exporters to the country in the first half of 2018 were the U.S., Japan and the U.K.

“The real number is likely higher than what is published,” Guerrero said. “With so many ports of entry, we lack the capacity to monitor exactly what comes in.”

Other countries in the region also saw a spike. Thailand’s imports increased by almost 2,000%, while Vietnam similarly saw a noteworthy rise, according to Greenpeace’s environmental news site Unearthed.

“Rich industrialized countries that have the resources to deal with these materials in a responsible way have outsourced the disposal to countries that are less capable,” Hernandez said.

Since imports spiked last year, countries including Malaysia and the Philippines have already begun sending unwanted trash back to its source, while others are rethinking their policies.

In January, the Philippines sent back 51 containers of mixed waste to South Korea, including plastic and other materials that were misdeclared, six months after it arrived in a southern port. Officials in Seoul said the country would take back the trash and shoulder the shipment costs.

In April, Malaysia became the second country to push back when it returned five containers to Spain, CNN reported. Environment Minister Yeo Bee Yin said it would continue to send waste back, with plans to ship more than 3,000 tonnes of contaminated waste to the countries that exported them. Specifically, she said 100 tonnes of the waste would be sent back to Australia, the Guardian reports, including plastic bottles that she said were “full of maggots.”

Speaking to reporters during a visit to Tokyo in late May, Malaysia’s Prime Minister Mahathir Mohamad called the trade “grossly unfair,” according to the Associated Press. “We don’t need your waste because our own waste is enough to give us problems,” he said.

And on Friday, the Philippines made good on its previous threat to send trash back to Canada as a cargo ship loaded with 69 containers of garbage left the Manila for Vancouver, escalating a diplomatic row between the two countries. Philippine President Rodrigo Duterte earlier said that Canada missed a deadline to take back the trash it shipped to the Philippines in 2013 and 2014, and threatened to dump it in Canada’s waters if the country refused. Canada reportedly said it would take back the trash, exported as part of a commercial agreement and without government permission, but that it needed more time.

But the damage has been done, Guerrero said. Almost a third of the garbage sent to the Philippines from Canada could not be sent back as the trash had already leaked and been dumped into landfills.

Both Malaysia and Vietnam have attempted to restrict imports by suspending the issue of licenses, according to Reuters. The Thai government has also ordered the temporary prohibition of plastic waste, according to Greenpeace.

How is this impacting the environment?

The accumulation of plastic along the countries’ shores pose significant threat to the environment and livelihoods of local communities.

“The plastic waste is burying agricultural communities, literally transforming what used to be pristine environments into toxic dumpsites,” said Hernandez, of Break Free From Plastic.

Because a significant percentage of the imports are mixed municipal waste that cannot be recycled, most end up illegally incinerated on roadsides and dumped in unregulated landfills, where they release highly poisonous fumes.

According to the Global Alliance for Incinerator Alternatives (GAIA), bodies of water in the worst affected villages have registered dangerous levels of zinc, iron and lead. Entire crop fields have also been wiped out, posing threat to local livelihoods.

In response, environmental groups are putting increased pressure on governments to clamp down on imports and sign the Basel Ban Amendment, an extension of a U.N. treaty known as the Basel Convention.

The amendment, which is not yet in force, would prohibit developed nations from exporting hazardous waste to developing nations. Philippines and Vietnam are not signatories.

In the meantime, developed countries continue to export their trash.

“Richer nations are shipping their problems down here so they can take advantage of the poor environmental standards,” Guerrero said. “It’s deplorable.” 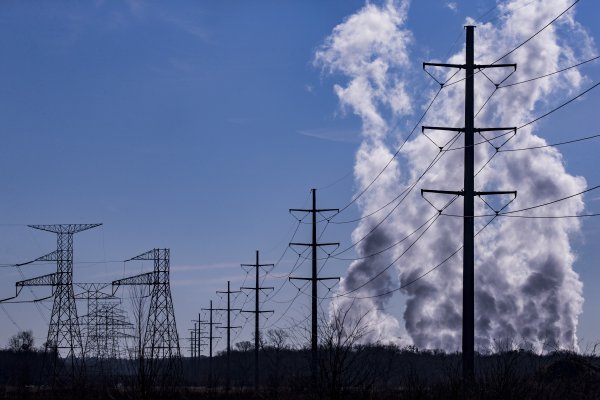 The Energy Department Wants to Export More 'Molecules of Freedom'
Next Up: Editor's Pick