Special Counsel Robert Mueller doesn’t do takedowns or insults on Twitter. He doesn’t deliver broadsides at press conferences, and, until Wednesday, had not spoken publicly for two years.

Instead, Mueller has seemed determined to let his report, released April 18, speak for itself. And what it has said speaks volumes.

That 448-page report is full of shocking detail about Russia trying to tip the election in Donald J. Trump’s favor, members of his campaign having ill-advised meetings and discussions with various Russians and the President asking staff to lie about their actions as Mueller’s investigation got underway.

But while Mueller has let his words bear witness, Trump has filled the silence with his own arguments and counter-claims.

Mueller waited until his final day at the Justice Department to deliver a response, painted in the muted tones of an investigator trying hard not to tilt the political system in either direction.

Mueller, characteristically appearing in a dark suit, white button-down shirt and subtle tie, said that if he thought Trump was innocent of obstructing justice during probe, he would have cleared him. He didn’t, and crucially, he left Congress an open invitation to act where he felt he could not. After months of attacks on their credibility, Mueller pointedly defended the fairness and integrity of his staff. And, in a final, underlined point, Mueller called on every American to pay attention to Russia’s sweeping effort to interfere in the 2016 election.

“There were multiple systematic efforts to interfere in our election. That allegation deserves the attention of every American,” Mueller said before exiting the podium without taking questions from reporters.

Mueller’s report detailed a robust effort by Russian government agents to sow division both online and through initiating real-world protests, steal emails used by the Hillary Clinton campaign and time the release damaging information to harm Clinton’s candidacy. Trump has repeatedly questioned whether Russia interfered in the election at all, which he sees as Democrats questioning the legitimacy of his election.

Trump has stonewalled demands for more information from House Democrats about how he handled the Mueller investigation, claiming that Mueller has already cleared him. But on Wednesday, Mueller publicly said the opposite.

Mueller said he had decided based on Justice Department precedent that he couldn’t charge a sitting president, but pointed to Congress as another way for such allegations to be considered. The Constitution requires a process “other than the criminal justice system” to formally accuse a sitting president, Mueller said, citing the Office of Legal Counsel’s opinion on whether presidents can be charged.

The former FBI director also pushed back at the idea that his obstruction investigation was a sideshow from his central mission of investigating Russian interference.

Whether or not Trump acted to interfere in Mueller’s work was of “paramount importance,” Mueller said. “It was critical for us to obtain full and accurate information from every person we questioned. When a subject of an investigation obstructs that investigation or lies to investigators, it strikes at the core of the government’s effort to find the truth and hold wrongdoers accountable,” Mueller said.

And he defended his work against Trump’s allegations that his team was driven by partisan animus. In what would under other circumstances be a pro forma part of his remarks, Mueller thanked the attorneys, the FBI agents, the analysts and professional staff who acted in “a fair and independent manner.”

Despite Mueller’s rebuke, the White House is eager to get past the investigation. White House Press Secretary Sarah Sanders said in a statement Wednesday: “After two years, the Special Counsel is moving on with his life, and everyone else should do the same.”

The Trump campaign, meantime, called for moving on from Mueller’s work to instead focus on “investigating the investigators.”

“The case is now closed,” wrote campaign manager Brad Parscale. ““Now it’s time to turn to the origins of the Russia hoax and get to the bottom of why the Trump campaign was spied on by the Obama-era DOJ and FBI. Anyone who is for transparency, constitutional civil liberties, and the rule of law should want to know why human sources, wiretapping, and unmasking were used to infiltrate a presidential campaign.”

Congressional Democrats want Mueller to testify about his investigation, but Mueller on Wednesday said the report “speaks for itself” and he would not provide information beyond what is already public.

“The report is my testimony,” Mueller said, reading a written statement to reporters at the Department of Justice. Mueller’s reticence is setting up a confrontation with House Judiciary Committee Chairman Jerrold Nadler who has said he will subpoena Mueller if he has to.

Mueller tried to end his investigation with the closing remarks on Wednesday, but it’s already clear that they won’t be the final word. 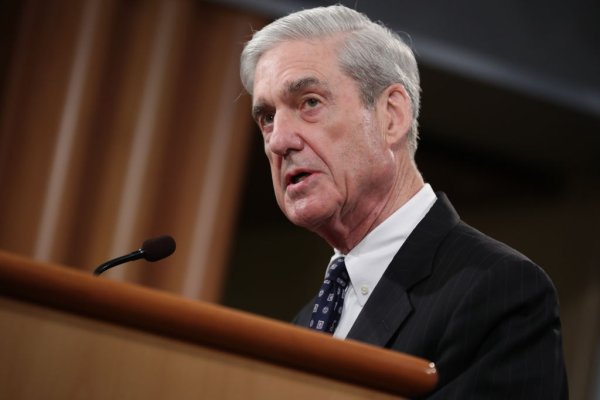