For 12 consecutive days, at least eight tornadoes a day have been reported across the Central Plains.

More than 500 tornadoes have been reported in a 30-day period, the New York Times reports, citing preliminary data from federal government weather forecasters. Such a long stretch of tornadoes is rare, though not wholly unprecedented, according to Bill Bunting, chief of forecast operations at the National Oceanic and Atmospheric Administration’s Storm Prediction Center. Since 1950, only four other years had 30-day periods where there were 500 or more tornado reports, including in 2003, 2004, 2008 and 2011.

Storms Tuesday throughout the Kansas City area sparked tornadoes and brought widespread destruction to the region, destroying houses, downing trees and power lines and covering roads with debris, according to the Kansas City Star. At least a dozen people were injured after tornadoes moved through the area. Bunting, who is based in Oklahoma, said it’s “remarkable” to see the cost of the tornadoes in terms of “damage to homes and business and agriculture.”

“As tragic as the death toll has been, the fact that it isn’t higher tells me people are heeding warnings,” he says.

The tornadoes were the latest in a bout of severe weather that has struck the Midwest and extended eastward, into Pennsylvania and New Jersey. At least two people have died and hundreds have been injured since storms throughout the region have sparked tornadoes in recent weeks. The storms Tuesday marked the 12th day in a row in which at least eight tornadoes were called in to the National Weather Service, the Associated Press reports.

At least 12 people were taken to a hospital in Lawrence, Ks., according to the AP. Damage from the tornadoes extended into Linwood, Bonner Springs and Pleasant Grove, Ks. The severity of the tornadoes pushed the National Weather Service to issue notice of a tornado emergency.

The storms are a result of a low pressure weather system that has hung over parts of the central U.S., kept in place by a high pressure system that is stuck off the east coast, according to Jonathan Kurtz, a meteorologist with the National Weather Service in Kansas City, Mo.

“That high pressure center has been unable to move off the Atlantic. It’s been blocked and keeping the central part of the U.S. under warm, moist air,” he tells TIME. “Every day, we have some low pressure center move over the central U.S., and spark thunderstorms.”

According to Bunting, it is unclear whether the storms and ensuing tornadoes are linked to climate change because of the challenges in establishing the cause of tornadoes. As the reliable tornado record only goes back to 1950, Bunting says it is not clear cut whether increased reports of tornadoes are a result of “what’s going on in the atmosphere” or better efforts to document the storms.

The storms come as Kansas experiences record rainfall and goes through one of its wettest months in 131 years.

The heavy amount of rainfall is forcing the area to contend with a heavy amount of flooding, according to Kurtz. Kansas Gov. Laura Kelly this week asked for an emergency declaration in light of the “disaster-level flooding” in about half of Kansas’s counties, the Wichita Eagle reports. The flooding has prompted Kelly to declare states of disaster in 49 of 105 counties.

“Tornadoes are one of the most destructive things we have. The days of rainfall are the big challenge we have,” Kurtz says. “Pick a state in the midwest and there’s likely river flooding going on.” 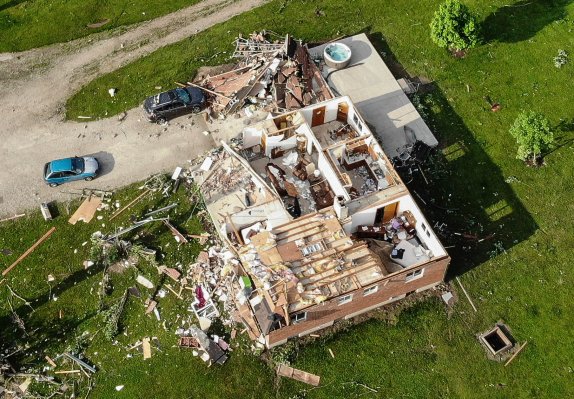 At Least 2 Dead as Severe Weather Sweeps the Midwest
Next Up: Editor's Pick