Australian navy helicopter pilots were reportedly hit with laser beams from fishing boats during a recent military exercise on the South China Sea, leading experts to believe they were being monitored by Chinese maritime militia on the disputed waters.

The pilots were “followed at a discreet distance by a Chinese warship,” according to Euan Graham, an academic with Australia’s La Trobe University.

Graham, who was invited aboard the Royal Australian Navy flagship HMAS Canberra during a voyage from Vietnam to Singapore, referred to the episode as “coordinated harassment.”

“[This was] despite the fact that our route didn’t take us near any feature occupied by Chinese forces or any obviously sensitive areas,” Graham wrote in a blog post for the Australian Strategic Policy Institute’s Strategist.

While interactions between the Royal Australian Navy and People’s Liberation Army Navy were cordial, Graham said the Australian pilots were told to notify the Chinese in advance of any amendments to their course.

The U.S. has observed a rise in Chinese military activity in the South China Sea, a disputed body of water that China lays large claims to but is also partially claimed by several other countries including Vietnam, the Philippines and Malaysia.

But this appears to be the first time that the Australian military has been targeted, maritime law expert Don Rothwell told the Guardian.

“Their sole purpose appears to be disruption,” he said, adding that it didn’t matter that the Australian navy ships were not near any of the Chinese artificial islands as any aerial presence in the South China Sea would alert China regardless. 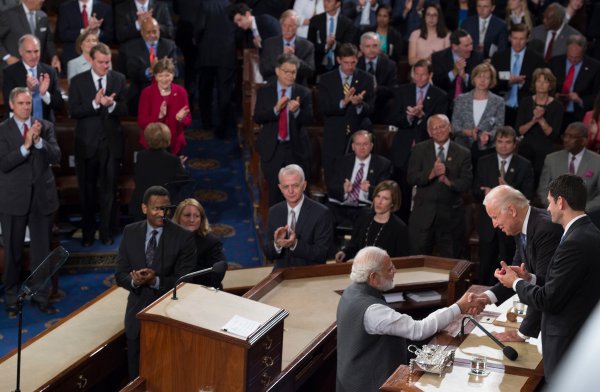 A Biden Presidency Could Change U.S.-India Relations
Next Up: Editor's Pick