Teachers, parents and students march towards Parliament during a teachers strike in Wellington, New Zealand on May 29, 2019.
Hagen Hopkins—Getty Images
By Hillary Leung

More than 50,000 teachers across New Zealand took to the streets on strike Wednesday to demand pay rises and better working conditions following fruitless negotiations with the government, the Guardian reports.

The “mega-strike” is the largest education walkout the country has seen, joined by both elementary and high school teachers across major cities including Auckland, Wellington and Christchurch. More than 700,000 children were affected as schools closed for the day.

“Our children cannot wait and neither can our teachers,” Stuart said.

The government had previously offered teachers pay rises of 3%, which Education Minister Chris Hipkins said is “it” and that the the country is not able to increase their salaries by any more than that. But the unions say that is not enough, demanding at least 15% or more, according to the Guardian.

“Teachers are overwhelmed and we don’t have time to teach,” Khali Oliveira, a primary teacher at Gladstone primary in Auckland, told the Guardian. “We want the government to invest in the future of teachers and the country’s children – we’re sick of Band-Aid solutions.”

A lack of teaching staff has also led to the government recruiting teachers from Australia and the U.K., but even so, schools have been forced to request retired teachers to come back and principals forced to take over classrooms to make up for the shortfall.

The strike comes a day before Prime Minister Jacinda Ardern’s government’s plans to unveil the nation’s first “wellbeing” budget, which aims to allocate funding towards tackling inequality, mental health and other social issues. 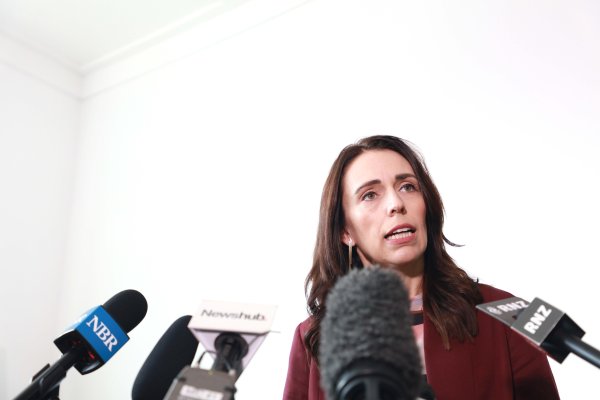 NZ Prime Minister Does 'Not Understand' U.S. Gun Laws
Next Up: Editor's Pick