President Trump's Visit to Japan Was a Success — for Japan

President Trump’s visit to Japan was a success for that country, but foreign policy experts say it was more of a wash for the United States.

Facing upcoming parliamentary elections and an ongoing threat from North Korea, Japanese Prime Minister Shinzo Abe was able to showcase the strength of his country’s alliance with the U.S. to both domestic and foreign rivals.

He also got the visual imagery he had hoped for — Trump as the first foreign leader to meet the new Emperor Naruhito, dining and playing golf with Abe and visiting a Japanese helicopter carrier that is being converted so it can handle F-35B short-takeoff-and-landing jet fighters that Lockheed Martin hopes to sell.

“From Japan’s point-of-view, Abe got everything he wanted out of this visit,” says Daniel Sneider, an Asia expert at Stanford University.

But foreign policy experts both inside and outside the Administration say the president’s very public breaks with National Security Adviser John Bolton’s and Secretary of State Mike Pompeo’s aggressive stands on Iran and North Korea during the trip will fuel new confusion among allies and adversaries about U.S. policy toward the two countries.

During a carefully scripted four-day visit to Japan, Trump contradicted his national security adviser and other top officials on two key issues, insisting that recent North Korean missile tests did not violate United Nations resolutions and saying he did not seek regime change in Iran, which Bolton has championed for years.

“Publicly contradicting the national security adviser and the secretary of State, especially on nuclear issues, just compounds the confusion about who speaks for the United States,” one senior U.S. official told TIME. “The president contradicting himself doesn’t help matters.”

Trump’s departure from Bolton’s harsh rhetoric threatening Iran also came as a relief in Tokyo, said a Japanese official, who like the two U.S. officials spoke only on the condition of anonymity because his comments and theirs were not cleared for release to the public.

Most important, said Sneider and one Japanese and two American officials, Trump pushed trade talks down the road beyond Japan’s upcoming parliamentary elections, and probably far beyond that. Trump had threatened to impose tariffs on Japaneses cars and car parts on the grounds that U.S. reliance on Japan’s auto industry — the main engine of its export-driven economy — is a national security threat.

All that, says Sneider, also may reinforce Japanese hopes that the upcoming G20 economic summit in Osaka will go smoothly without talk of trade wars.

Delaying trade talks with Japan, however, may be more about pragmatism than policy, Fred Bergsten, the president emeritus of the Peterson Institute for International Economics, tells TIME.

“Trump wants to put all the other trade issues, including Japan, Mexico and Canada, on hold until he gets a deal with China,” says Bergsten. “He wants to maintain at least a facade of a unified stance.”

But the one thing that was noticeably not discussed in Tokyo was China — the U.S. trade war with China and its impact on the Japanese economy — and even more broadly how to deal with China, says Sneider. “I found that absence revealing, as it is in some ways the most important strategic discussion the two countries should be having.”

The most evident gap between the two leaders, however, was on North Korea’s recent short-range missile tests, which Trump dismissed and Abe called a violation of United Nations Security Council resolutions.

On that issue, U.S. State Department, military and intelligence officials Tuesday said they side with Abe.

“President Trump once again ricocheted all over the rostrum in Tokyo, where his comments on North Korea contradicted his advisers, expressed his faith in Kim Jong-Un and ignored the reality reflected by Pyongyang’s behavior that Prime Minister Abe much more clearly described,” says Kent Harrington, a former national intelligence officer for East Asia and CIA station chief. “Compared to Trump, Kim is playing a consistent and increasingly influential role.”

While Trump was distancing himself from Abe, Kim “is quietly building a new united front with China and Russia, much to the detriment of U.S. interests in the region,” he added.

“If you stand on ceremony, the Japanese are right that the visit was a success,” summarized the U.S. official. “But ceremony only gets you so far.” 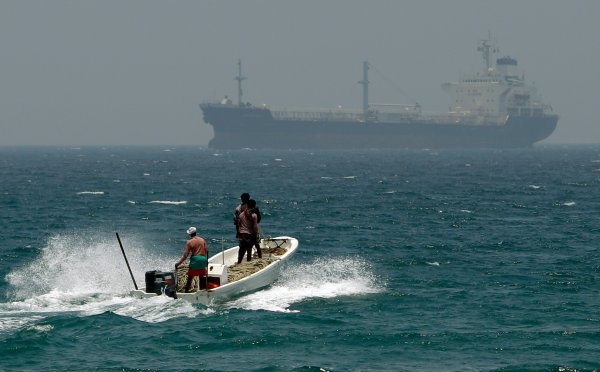 Trump Sends Troops to Middle East But Won't Say Why
Next Up: Editor's Pick