Annalena Baerbock, 2 from L, Chairwoman, Sven Giegold,l, Ska Keller, co-lead candidates for the German Greens Party, Robert Habeck, Chairman and other members of the party wave to delegates at a Greens party congress on May 18, 2019 in Berlin, Germany
Michele Tantussi—Getty Images
By Charlotte McDonald-Gibson / The Hague

Green Party politicians struggle to pinpoint the exact moment when it became clear they were making history in the European Union’s parliament elections. Hopes stirred when Irish exit polls showed the country had elected its first two Green representatives. Next the Greens came in a shock second place to Chancellor Angela Merkel’s party in Germany.

Then around midnight on the main election day of May 26, the count confirmed that even Portugal—which, like much of southern Europe, has been a longtime wasteland for environmentally-focused parties—had elected Francisco Guerreiro of the People-Animals-Nature (PAN) party.

“It was a big surprise because we had been disregarded by the traditional media,” says Guerreiro, who seems a little shell-shocked at the prospect of travelling back and forth to Brussels as a Member of the European Parliament (MEP). But he is excited about the future, he tells TIME in a phone interview. “We have to be confident and know that we are leading a new way of making policy and politics, and each day we see the support of society grow.”

The challenge for Guerreiro and his Green colleagues is translating these record successes into concrete policies that benefit the environment, at a time when the European political landscape is more fractured and polarized than ever. “The Green issue has grown up”, says Susi Dennison, a senior policy fellow at the European Council on Foreign Relations, a pro-E.U. think tank. “Now it needs to become a core part of the agenda and I expect to see national governments responding to that.”

The European Green Party — the federation of national parties that focus on environmental policies — surpassed all expectations in the Europe-wide vote. Buoyed by protest movements, increasingly stark reports from climate scientists, and galvanizing figures like Swedish teen activist Greta Thunberg, the party won at least 69 seats in the European Parliament, up from their current 50 seats. They will be the fourth largest group in the 751-seat body, which works with the European Union’s executive arm to propose and approve laws for the bloc.

Across much of northern Europe they made record gains, coming close to doubling their share of the vote in France, the United Kingdom, Denmark and Finland.

It was not just their environmental policies which captured the public’s attention, the group’s leaders say, but a focus on social justice and fairness, and a desire among the E.U. electorate to shake up the traditional parties and vote for people promising change. “Everyone was talking about the rise of the far right and was very concerned about that and were looking for a force of courage and positive change,” says Ska Keller, a German Green MEP who is the group’s co-leader in the European Parliament. “And we have been able to provide a positive vision of the future of Europe.”

For the first time, the big center-left and center-right groups – which traditionally worked together to dominate European policy-making – have lost their majority. So the first task for the European Greens is to work out their alliances in this uncharted parliamentary landscape, and figure out how to leverage their newfound influence.

“The dynamic is going to be completely different and this is playing in our favor,” says Terry Reintke, a German Green MEP. “We have much more power in terms of making demands, and if they are not met it is going to be difficult for any group to form a pro-European coalition.”

Big policy promises include a Green New Deal to create jobs through sustainable investments, a carbon tax, a move to 100 % renewables and an overhaul of the bloc’s agriculture policy to focus on environmentally friendly practices.

The party could push for one of the top portfolios in the E.U’s cabinet – for example, the energy portfolio – meaning they can really force their agenda from within.

Another lasting impact will be on national politics. In Germany, the traditional parties have conceded that they should have had a more coherent climate policy, and centrist parties in Ireland, France and Denmark will also look at ways to win back votes from green rivals. After the Green-Left party had a big win at the Netherlands’ general elections in 2017, the Dutch government was moved to adopt one of the world’s toughest climate bills.

But it will be a difficult balance, especially for center-right parties which have shifted their rhetoric towards the extreme right to placate populist and nationalists, who despite slightly worse-than-expected results on Sunday remain a political force. In some areas of Germany, the far-right Alternative fur Deutschland (AfD) had a strong showing and has already announced that the Greens are now their “main competitors”.

In the past the Greens have struggled to build the coalitions needed to make a difference in the E.U. Parliament, in party because of their immovability on many issues. For now, they are adamant that their bigger mandate means it is the centrist parties that need to compromise. “In a way it’s the same tactic as the extremist parties have used on migration – if you want to work with us then move in our direction,” Dennison says.

But the party is confident that Green issues will continue to climb the agenda. In the months leading up to the election, polls showed that climate change is now one of the top three concerns in ten E.U. countries. Even in areas such as eastern Europe where there is very little formal representation of Green parties, pollution and air quality are issues of concern.

And Greens are not just poaching voters from the left. In Germany they took votes from all parties including the AfD and have performed strongly in industrial areas. Across Europe, the Greens are polling strongly among young voters. By the next European Parliament election in 2024, many of the school children out on the streets for climate strikes will be of voting age, and the Green Wave may become a deluge.

“Everybody is always talking about the far right, and yes they are a big concern, but there are also all these other things happening – the climate strikes, the pro-European marches, the anti-corruption movements,” Keller says. “It shows there is also this other Europe to which we need to pay much more attention.” 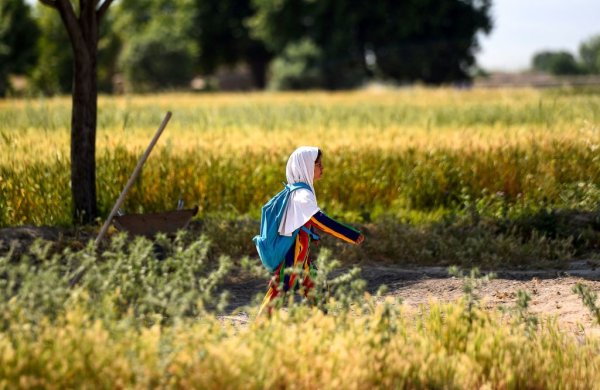 'Education Is Under Fire' in Afghanistan, the U.N. Says
Next Up: Editor's Pick