No athlete in modern history deserved the vitriol and ridicule that came his way less than Bill Buckner, the former All-Star first baseman for the Boston Red Sox — and four other major league baseball teams — who passed away on Monday, at 69.

Buckner, who had been battling Lewy Body dementia, became synonymous with screwing up, just because a slow roller that trickled toward him one October night in 1986, during Game 6 of the World Series between his Boston Red Sox and the New York Mets, scampered under his glove and into right field, allowing the Mets to score the winning run and send the Series to a seventh game, which the Mets won because, well, that’s how these things work. That World Series loss extended the so-called Curse of the Bambino, Boston’s torturous World Series title drought, to 68 years. Fans heckled Buckner at Fenway the following season, before the Red Sox released him. He received death threats.

That all seems silly as now, as Boston went on to win four titles since the turn of the century, the most recent one last season. Buckner returned to the good graces of Boston fans as soon as four years after his error, when he came back to the Red Sox for a brief 1990 stint and received a standing ovation. The fans also feted a teary Buckner when he threw out the first pitch at the home opener in 2008, after Boston won the 2007 World Series, their second in four seasons. “Won’t you please welcome him back to Boston,” said the PA announcer that day, “and let him know that he is welcome always, number 6, Bill Buckner.”

But Buckner was never lucky that Boston forgave him for his error. No, the fans benefitted from his kindness. He forgave them.

For the harms of his error were always ridiculously overblown. First of all, the game was already tied when Mookie Wilson’s dribbler went between his wickets. The Mets owned all the momentum, as they rallied from being one single strike away from elimination. New York scored the game-tying run on a wild pitch by Boston reliever Bob Stanley, and even if Buckner had fielded the ball cleanly and threw Wilson out at first, there’s no guarantee Boston wins the game in the subsequent innings.

Not to mention that Wilson, a speedy runner, might have beaten out a throw to first anyhow. Or that Buckner was basically playing on one foot – he had injured in his ankle and was hobbling around the field. Red Sox manager John McNamara reportedly wanted Buckner to be on the field to celebrate Boston’s historic victory, which is a kind sentiment, but counts as managerial malfeasance. Buckner should have been seated in the dugout that inning, replaced by Dave Stapleton, a far healthier defender.

Buckner finished his 22-year career, which stretched across four decades (1969-1990), with 2,715 career hits, close to the 3,000 hit milestone that all but guaranteed Hall of Fame enshrinement in the pre-steroid era. He won a batting title for the Chicago Cubs, in 1980, and was a key cog in the Boston lineup back in 1986, as he drove in 102 runs, second-highest on the team behind Hall of Famer Jim Rice, who drove in 110.

Buckner came to terms with his infamy. He struck up a friendship with Wilson, who kept the Mets’ chances alive that Series just by putting the bat on the baseball. The pair hit the collectibles circuit, signing autographs as a buddy-buddy act linked in infamy. “I felt badly for some of the things he went through,” Wilson said in a statement Monday. “Bill was a great baseball player whose legacy should not be defined by one play.” Buckner gamely played himself in a 2011 episode of Curb Your Enthusiasm; Larry David’s character threw him an autographed Mookie Wilson baseball, but Buckner failed to catch it. The ball fell out of an Manhattan window and onto the street, enraging Susie Greene — played by invective superstar Susie Essman — whose lumpy husband Jeff was a Wilson fan on the show.

“It was a horseshit throw,” he told David. Buckner later made a diving catch to save a baby dropped from a burning apartment.

Eventually, Buckner was able to laugh off his mistake. But his passing still offers a useful reminder: Whether it’s Buckner, or Steve Bartman, the Cubs fan ostracized in his own city for inadvertently interfering with a Chicago outfielder while trying to catch a foul ball during Game 6 of the 2003 NLCS, which the Cubs lost, or former Minnesota Vikings kicker Blair Walsh, who missed a chip shot field goal in the final minute of a 2016 playoff game, humans don’t deserve to be remembered for their lowest moment when all they did was, maybe, cost a team a silly game. 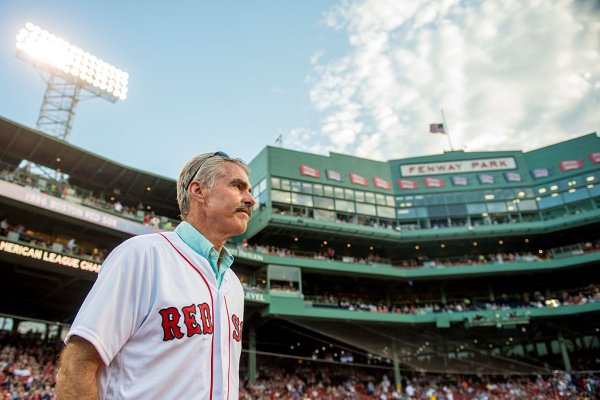