After Dayton, Ohio became the site of a peaceful protest against a very small Ku Klux Klan rally on Saturday, Mayor Nan Whaley is proud of the way her community came together. There’s only one problem: paying the massive bill required to keep protestors, and KKK demonstrators, safe.

“I’m proud of the city,” Whaley tells TIME. “I think it is frustrating on how expensive it is today to keep people safe.”

Local officials estimate that the city incurred $650,000 in expenses due to the KKK rally. That cost included assembling more than 350 police officers in order to keep the peace, as well as barriers and other materials used to keep the nine KKK-affiliated demonstrators separated from the protestors.

Whaley adds that cost of securing the rally was compounded by the fact that Ohio allows the open-carry of weapons, which exacerbated safety concerns for police and local officials.

“The number of assault rifles was troubling to me,” Whaley says. “This place we live in now [is] where we have to really prepare for really bad scenarios, and that’s really expensive.”

Community members expressed similar sentiments — proud of how their community united against racism and hatred on Saturday, but frustrated over the cost that their city incurred in managing the protest.

“The way that the city did it was really awesome, but as a taxpayer of the city I’m extremely aggravated and irritated [at] the fact that our city spent $650,000 on this,” says Dayton resident Jesse Seiber, 25, who put a sign up outside his restaurant that read, “Yo, KKK you’re in the wrong hood.”

“All around on the tallest buildings you had cops with binoculars watching the crowd,” says Seiber. “But as for the crowd itself, it was extremely peaceful.”

Only nine people actually showed up for the KKK rally Saturday, and their chants were drowned out by between 500 and 600 protesters, many from the community, who assembled in Dayton to show their opposition to the hate group’s message. Those protests remained peaceful and progressed without incident, with Dayton police reporting no arrests, no use of force, and no citations.

Whaley says that Dayton is in talks with Ohio Sen. Sherrod Brown’s office to help recoup some of Saturday’s costs.

In March, Dayton filed a lawsuit against an Indiana-based KKK-affiliated group that was planning a rally in their city, citing a danger to the community if the group held a paramilitary-style event, according to WCMH Columbus. In May, the two sides reached a settlement that prevented the group from wearing military-style gear or carrying assault rifles, shields, bats, knives or flame throwers. They were, however, permitted to cover their faces and carry certain firearms if they had permits.

Those precautions, along with a minuscule turnout from the group, strong police presence and a unified sentiment in the community may have all contributed to keeping Saturday’s events peaceful.

And because the KKK-affiliated group stuck to the terms of the consent agreement for holding their rally, Whaley says she has been advised the city had no avenue to try to recoup the security costs from the hate group itself.

For some Dayton residents, that the price may have been worth it. “I’d much rather spend money than human lives,” says Dayton bar owner Gus Stathes. “It could have gotten real ugly real fast.” 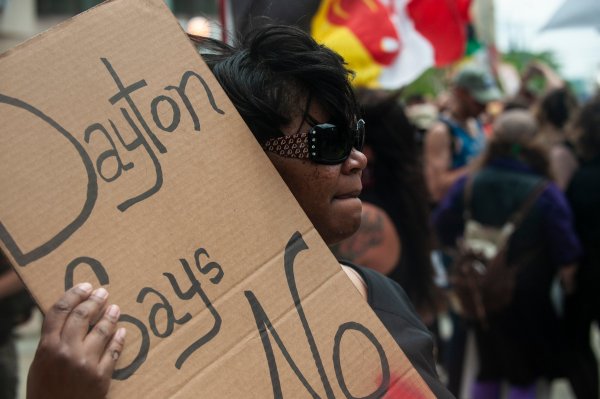 600 Protestors Drown Out 9 People at Ohio KKK Rally
Next Up: Editor's Pick