Why Is Trump Sending More Troops and Firepower to the Middle East? That's Classified

FILE - In this May 30, 2012, file photo, fishermen cross the sea waters off Fujairah, United Arab Emirates, near the Strait of Hormuz. The United Arab Emirates said Sunday, May 12, 2019 that four commercial ships near Fujairah "were subjected to sabotage operations" after false reports circulated in Lebanese and Iranian media outlets saying there had been explosions at the Fujairah port. (AP Photo/Kamran Jebreili, File)
Kamran Jebreili—AP
By W.J. Hennigan

The Trump Administration has spent the past month ringing alarm bells over what it has called “troubling, escalatory and dangerous” behavior by Iran. Yet government officials have shown very little evidence to the American public about that supposed threat.

The Pentagon said Friday additional troops and firepower are headed to the Middle East, marking the latest move by the Trump Administration to boost the American arsenal in the region by air, land and sea. Meanwhile, in another effort to deter Iran, the State Department issued an emergency notification in order to move forward with $8.1 billion in weapons sales to Saudi Arabia and other Arab allies, despite Congressional objections.

The U.S. has been headed on a collision course with Iran ever since President Donald Trump walked away from a multilateral nuclear deal a year ago. The Administration’s increasing pressure on Tehran has resulted in an unpredictable and tense standoff with potentially serious implications.

Adm. Michael Gilday, the U.S. military’s Joint Staff director, told reporters at the Pentagon Friday that Tehran was responsible for a string of recent attacks in the Middle East. The incidents, he said, included an assault on four tankers in the Gulf of Oman near the Strait of Hormuz, armed drone attacks against Saudi oil facilities and a rocket attack in Iraq’s Green Zone, where the U.S. embassy is located.

Each incident was directed by “the leadership of Iran at the highest level,” Gilday said, adding: “Even more troubling, we’ve had multiple credible reports that Iranian proxy groups intend to attack U.S. personnel in the Middle East.”

Gilday did not, however, provide any proof linking Iran to the attacks or produce evidence of the threats. Nor did he explain how any of the behavior is different from what Iran and its proxies have been doing for years throughout the Middle East. “I’m not reverse-engineering this,” he said. “The Iranians have said publicly they were going to do things. We learned more through intelligence reporting they have acted upon those threats and they’ve actually attacked.”

When pressed about the evidence that led to additional manpower and equipment being sent to the region, Gilday replied that the intelligence was too sensitive to disclose. “I can’t reveal the sources of that reporting except to say, with very high confidence, we tie the Iranians to those,” he said.

According to two intelligence officials and one military officer with inside knowledge of the intelligence, the answers to questions about whether Iran is mounting an offensive remain unclear.

The White House began escalating warnings about the Iranian threat after overhead surveillance spotted Iranian groups moving ballistic missiles on small boats, called dhows, in the Persian Gulf. That was a defensive move, the analysts say. The Iranians know U.S. intelligence watches and eavesdrops on their military movements and communications, but they made no attempt to conceal the missiles’ movement.

Nevertheless, the Pentagon now plans to send an additional 900 troops to the Middle East in response to Iran’s “campaign” of violence intended to damage the United States and its allies, Gilday said. Additionally, the U.S. will send a squadron of 12 jet fighters, several spy planes and extend the deployment of 600 soldiers operating Patriot missile batteries. The troops and hardware will join the B-52 bomber task force, the U.S.S. Abraham Lincoln aircraft carrier strike group and other military assets already dispatched to the region.

There is little dispute within the Administration that Iran is a bad actor intent on expanding its influence in the Middle East, either directly as its military forces and Iranian-backed political groups have done in Iraq, or by funding and equipping proxies such as Hezbollah in Lebanon and Hamas in Palestine. The debate has been about how to respond.

The decision came to Trump’s desk Thursday and he decided to take a modest response. “We’re going to be sending a relatively small number of troops, mostly protective,” he told reporters Friday at the White House before departing on a trip to Japan. “And some very talented people are going to the Middle East right now, and we’ll see how — and we’ll see what happens.”

Kathryn Wheelbarger, Acting Assistant Secretary of Defense for International Security Affairs, told Pentagon reporters that the additional forces will be stationed at undisclosed locations in the Middle East, but stressed it wouldn’t be Iraq or Syria. “We are seeking to avoid hostilities,” she said. “We are not seeking war with Iran.”

Trump hasn’t been shy in vocalizing his aversion to overseas military entanglements, but John Bolton, his national security adviser, has repeatedly advocated for the use of force in Iran. The president wants U.S. allies in the region to take on more of a role. The Administration issued an emergency declaration so it can sell arms to Saudi Arabia, Jordan and United Arab Emirates. For more than a year, U.S. lawmakers have blocked about $2 billion in weapons sales to Saudi Arabia, among the largest purchaser of American arms, over concerns about the October killing of journalist Jamal Khashoggi and mounting civilian casualties in the Saudi-led military operation in Yemen.

New Jersey Sen. Bob Menendez, the top Democrat on the Senate Foreign Relations Committee, said that the Administration cited Iran’s actions to use the rare provision in the Arms Export Control Act. “In trying to explain this move, the Administration failed to even identify which legal mechanism it thinks it is using, described years of malign Iranian behavior but failed to identify what actually constitutes an emergency today, and critically, failed to explain how these systems, many of which will take years to come online, would immediately benefit either the United States or our allies and thus merit such hasty action,” he said.

Meanwhile, the Administration continues to ratchet the economic pressure on Tehran after abandoning the 2015 nuclear deal, known formally as the Joint Comprehensive Plan of Action. The State Department says nearly 1,000 Iranian individuals, businesses and banks have been sanctioned. The Administration last month designated the Islamic Revolutionary Guard Corps, an arm of the nation’s military, as a terrorist organization, which restricts members’ banking transactions and ability to travel. It marked the first time the U.S. designated an arm of a nation’s government as a terrorist group.

Despite resistance from virtually every major world power for leaving the deal, the U.S. has turned the global financial system into a weapon against Tehran. The policy has triggered an exodus of corporations and financial institutions that would rather abandon their investments in Iran than risk U.S. Treasury Department sanctions. Iran’s economy-sustaining oil exports have plunged to historic lows.

Tehran, which for its part has complied with the 2015 nuclear agreement despite the U.S. pullout, is seeking to split other countries from the U.S. by salvaging a deal with its remaining signatories: Russia, China, Germany, Britain and France. It has thus far elected for minimum retaliatory measures. But as the screws continue to tighten on the economy, Iran has announced its intent to return to the path toward producing nuclear bomb.

Iranian President Hassan Rouhani vowed to ramp up enrichment of nuclear material earlier this month unless Tehran gets sweeping relief from economic sanctions. He promised to enrich to weapons-grade levels in two months if the U.S. didn’t relent.

The moves taken by the Trump Administration on Friday show no intention to let up the pressure.

With reporting by John Walcott in Washington 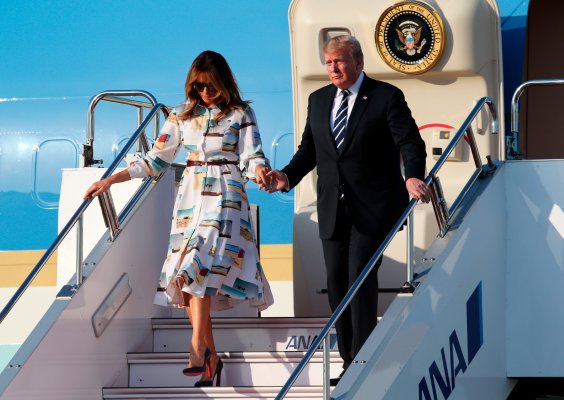