Modi Has United India Like No Prime Minister in Decades

Ideas
By Manoj Ladwa
Manoj is founder and chief executive of the India Inc. Group. In 2014, he led the Research Analysis & Messaging division of the Narendra Modi for Prime Minister campaign

The largest democratic exercise in history, which saw more than 600 million Indians vote, may have ended in a landslide for Prime Minister Narendra Modi’s Bharatiya Janata Party (BJP), but this election was no formality. It followed perhaps the most abusive, abrasive and ill-tempered campaign in India’s history, in which opposition party Indian National Congress president Rahul Gandhi attempted to do battle on every available faultline in Indian society.

Yet despite the strong and often unfair criticisms leveled at Modi’s policies both throughout his first term and this marathon election, no Prime Minister has united the Indian electorate as much in close to five decades. The last time an Indian Prime Minister was re-elected with a parliamentary majority was in 1971. His coalition won just under 50% of the national vote.

How has this supposedly divisive figure not only managed to keep power, but increase his levels of support? A key factor is that Modi has managed to transcend India’s greatest fault line: the class divide.

Narendra Modi was born into one of India’s most disadvantaged social groups. In reaching the very top, he personifies the aspirational working classes and can self-identify with his country’s poorest citizens in a way that the Nehru-Gandhi political dynasty who have led India for most of the 72 years since independence simply cannot.

His second consecutive term is a victory for meritocracy, and for opportunity, thanks to a slate of welfare policies for the country’s extreme poor. Through socially progressive policies, he has brought many Indians, both Hindus and religious minorities, out of poverty at a faster rate than in any previous generation.

Modi pledged to improve the country’s sanitation and he has more than delivered; from fewer than 40% of households having access to a toilet, almost 95% do now. Close to all Indian villages now have access to electricity, when less than 40% did when he took office.

He has stabilized the volatile economy that he inherited from the Congress government in 2014. From a position as one of Morgan Stanley’s pronounced ‘Fragile Five’ economies most vulnerable to collapse, India is now the fifth largest economy in the world and the fastest-growing major economy.

His embrace of technology is driving transformative programmes in universal healthcare, affordable housing, financial inclusion, and climate mitigation. Intuitively he has understood, like no other predecessor, how the much-admired tech skills of Indians can be used to transform society.

If there was short-term pain for the cash-reliant Indian population through his dramatic decision to wipe out high value currency notes overnight in November 2016 (referred to as demonetization), it has led to long-term gain. The tax base in India has almost doubled, and with it, the amount of tax collected — but with a lower tax burden on individual citizens.

More tax revenue means more funding for welfare programmes that have brought sanitation and electricity to so many. Meanwhile, the move away from cash has seen an unprecedented 200 million plus new bank accounts opened, bringing India’s so-called “unbankables” nearer to full integration within India’s formal economy.

Digitization has empowered the poor, eliminating corrupt middle-men and allowing direct deposits of state benefits, social security and pension payments into the hands of the poor. Modi has also succeeded in bringing the whole of India into one tax union, through the implementation of the Goods and Services Tax, and thereby making India at last a truly single market.

His reforms have helped bring inflation under control, from a record high of more than 12% at the tail end of Manmohan Singh’s government, to below 3% in April 2019; and has reduced the deficit down to 3.42%, when a decade ago it was staggering 6.46%.

Modi still has work to do, of course. Having plugged some horrendous holes in India’s notoriously inefficient and corrupt bureaucracy in his first term, he will now need to focus much more ruthlessly on reforming those institutions and make them fit for the coming decades. This will require him to remain the pragmatic politician he is, and continue to shun the temptations of populism as he sets out his stall for a second term.

All the achievements of Narendra Modi’s government are still works-in-progress. But with efforts recognized by virtually every single global institute of any standing, including the World Bank, the IMF, and the U.N., Modi’s India is finally progressing at a rate worthy of its size and potential.

Modi may have been criticised for remaining silent during incidents of social unrest. But his work has been given the thumbs up at the ballot box by the Indian voters for directly addressing the root causes of some of India’s divisions. For them, the Modi dream of a New India remains very much intact. 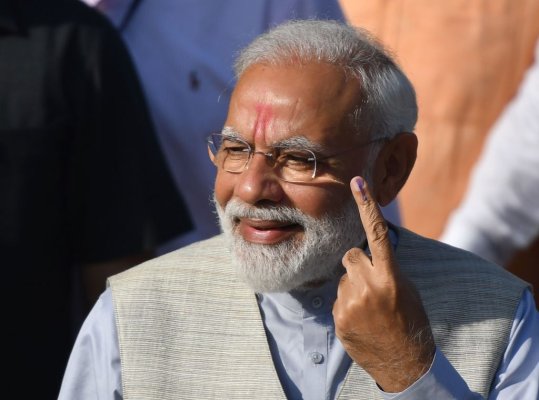 India's Economy Needs Tougher Reform. How Will Modi Use His Election Mandate?
Next Up: Editor's Pick