As Donald Trump arrived in Tokyo on Saturday, he was set to become the first foreign leader to meet Japan’s new Emperor Naruhito, but he won’t find much “executive time” on his schedule.

Japanese officials have gone to great pains to ensure that Trump’s time will be filled by playing golf with Prime Minister Shinzo Abe, presenting the “Trump Cup” to the winner of a sumo wrestling tournament and visiting a helicopter carrier that is being adapted so it could host Lockheed Martin’s vertical takeoff F-35B jet fighters. A dinner is planned at a robatayaki restaurant, where with respect for the president’s preference for well-done steak, the meat will be grilled before his eyes.

Much of that kabuki choreography is simply the product of traditional Japanese culture and hospitality, as well as Abe’s long-running effort to flatter the American leader, which in the past has included giving him a $3,755 gold-plated golf club.

However, Trump’s schedule is also booked to minimize any possibility that a substantive issue might arise and disrupt an agenda designed to make both leaders look good to the voters at home, say U.S. and Japanese officials and outside experts.

“This is a policy-free visit,” says Stanford University’s Daniel Sneider. “The Japanese know that Trump can be unpredictable and that his attention is focused on Washington, but it’s completely choreographed. It’s more like a weekend jaunt to Japan.”

That didn’t stop the President from bringing up the U.S. trade deficit with Japan shortly after he arrived Saturday. “I would say that Japan has had a substantial edge for many, many years. But that’s OK. Maybe that’s why you like us so much,” he said.

It’s not as if there aren’t plenty of serious issues on the table for the old allies. In addition to the breakdown in nuclear talks with North Korea, those include Trump’s threat to impose tariffs on Japanese auto and auto parts exports if Japan doesn’t open its doors to more U.S. agricultural products and pay more of the cost of supporting the 50,000 or so American forces in the country.

Neither country is in a hurry to confront those issues. Facing the prospect of a trade war with China, Trump has put his auto tariff threat on a 180-day hold. Japanese officials say that Abe, whose Liberal Democratic Party is facing elections in July for both houses of the Diet, Japan’s parliament, is in no position to make any unilateral concessions now on trade, defense costs or anything else.

Indeed, says a senior administration official, pursuing those issues now could endanger U.S. relations with its most important military, political, and economic ally in Asia. Nevertheless, Japanese officials are apprehensive ahead of the unpredictable Trump’s visit.

Barring an unintended tariff battle, however, Japan’s delicate choreography may underline the areas where the two nations remain aligned, Nicholas Szechenyi of the Center for Strategic and International Studies told a briefing this week. Take Trump’s planned visit to the Izumo-class helicopter carrier. If Tokyo decides to replace its aging F-2 warplanes with stealthy American F-35s, it would boost Japan’s already position as a top buyer of U.S. weapons. Upgrading to the F-35 would be a logical move since China’s most advanced fighter, the J-20, bears a remarkable resemblance to the American F-22, the F-35’s predecessor.

A friendly visit, uninterrupted by tweets about the divisive issues, also would send a message to other U.S. allies such as Germany and Canada that have stormy relations with Trump that peaceful coexistence is still possible.

“It’s critical for Japan’s survival that the U.S. uphold the international institutions built after (World War II), but that Europe and other countries work with the U.S. to do that, even in difficult times,” said Green.

In the end, said the senior U.S. official, “the mood will be the message.” 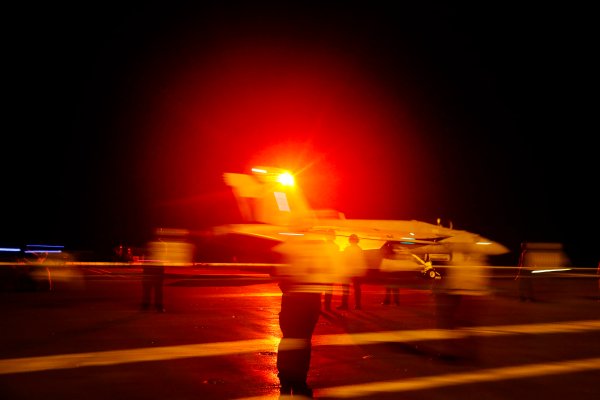 No Plans for Iran War
Next Up: Editor's Pick