While Jimmy Kimmel was off co-hosting the live Norman Lear tribute on Wednesday, he left his talk show in good hands by actor and comedian Lena Waithe to guest host Jimmy Kimmel Live! while he was away. While Waithe has plenty of experience in front of a camera thanks to working on Master of None and The Chi it felt like something was missing.

Luckily Waithe was prepared for that possibility and pushed on the “Berry Button”, which summoned the Oscar-winning actress to the stage. Berry appeared and asked Waithe, “Baby, what can I do for you?”

“I need some inspiration. Like that Oscars speech you gave, that got me hyped,” Waithe replied. “I need you to give me some of that Halle Berry juice.”

Berry was more than happy to comply and launched into a heartfelt, inspirational monologue for the guest host. “Lena, you know I know you, right? We’ve worked together, so I know that you are a force of nature,” Berry said. “You are a beautiful African American queen.”

She continued, “Lena, tonight you are a writer, an actor, a producer and tonight you are a late-night comedian. You about to slay this show!” If that moving speech didn’t get Waithe pumped, Berry gave it one more go: “And you are already winning, girl, because you are dressed way better than Jimmy ever was.”

The John Wick: Chapter 3 – Parabellum star wasn’t done yet. She looked at Waithe a moment and said, “I think you need something else.” She then planted a big old kiss on Waithe, before pulling away and declaring to Waite: “Now you’re good!”

While it’s unclear whether the kiss was planned or impromptu, Waithe was happy to share the moment on Twitter as a teaser for her hosting gig. Clearly, Waithe needs to be given her own talk show soon so she can push “The Berry Button” any time she wants or needs or just feels like it. 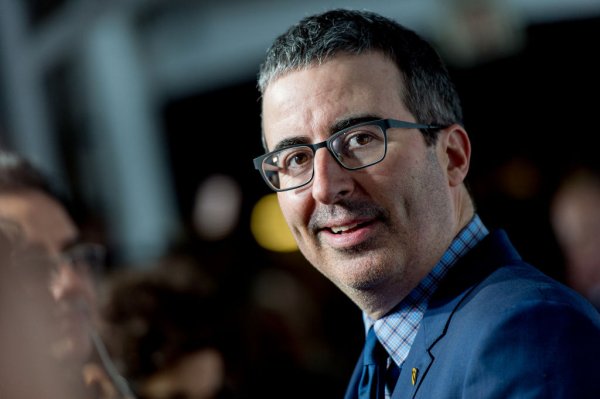 John Oliver Makes a Plea for Glenn Close's Spleen and Medical Examiners
Next Up: Editor's Pick