It’s a big moment for Europe’s most ambitious populists. They hope that elections for the European Parliament will give them the boost they need to extend their political momentum across the E.U. But in Austria they got off to a rough start because of an embarrassing video.

The details of that case are as ludicrous as they are damning. Vice Chancellor and leader of the far-right Freedom Party Heinz-Christian Strache was caught offering lucrative government contracts to a woman he believed to be the niece of a powerful Russian oligarch in exchange for her willingness to buy an Austrian newspaper and shift its editorial position to favor his party just before an election. For many, this episode confirmed two things: much of Europe’s far right is, or would like to be, on the Russian payroll, and its charismatic leaders lack basic good judgment.

The next development says something about the predicament facing center-right parties as they try to beat back attempts by the far right to steal their voters. Chancellor Sebastian Kurz, chairman of the center-right Austrian People’s Party, spotting an opportunity to test its far-right coalition partner with voters, called for new elections. That’s smart politics, but while the result may temporarily strengthen the center right at the far right’s expense, it doesn’t solve the larger problem that voters are anxious and angry at mainstream politicians who they believe don’t have their best interests at heart.

Across Europe, mainstream conservatives continue to wrestle with this problem, but they would be wise to do so carefully. In Germany, Annegret Kramp-Karrenbauer, Chancellor Merkel’s likely successor, has tried to prevent the far-right opposition Alternative for Germany party from pulling away her party’s voters in part by tacking to the right on the immigration policies that have undermined Merkel’s popularity. But she has also tried to force Merkel into early retirement, a plan that has backfired and now threatens her position within her party.

In France and Italy, center-right parties have made poor attempts to imitate anti-E.U. and anti-migrant language and policies that alienate centrist voters and make them appear to be pale imitations of more aggressive conservative rivals, who benefit by the comparison. In Spain, the rise of the populist Vox party has pulled the more moderate People’s Party and Ciudadanos party to the right, splitting the right-wing vote in ways that helped a center-left party finish first in the country’s most recent national elections.

But still the glaring, and most consequential, example of a center-right party’s miscalculating how best to manage a challenge from the right comes from the decision by then Prime Minister David Cameron to beat back criticism from the fledgling U.K. Independence Party by calling for a public referendum on Britain’s continued membership in the E.U. The punishment his Conservative Party has taken following the Brexit vote and the inability to deliver on its result has only just begun. An angry Briton doused Brexit champion Nigel Farage with a banana and salted-caramel milkshake on May 20, but it’s the Conservatives who are taking the biggest hit.

Europe’s populists are so far better at campaigning than at governing, and some of its leaders are more prone to poor judgment than their mainstream competitors. But far-right politicians haven’t simply invented anti-E.U., anti-migrant anger, and those who would deny them votes still struggle to answer this challenge. 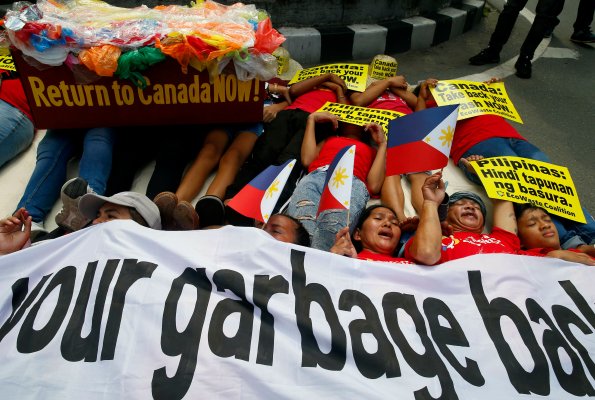 Philippines Threatens to Dump Canada's Trash in the Water
Next Up: Editor's Pick