(Bloomberg) — The U.S. is considering cutting off the flow of vital American technology to as many as five Chinese companies including Hangzhou Hikvision Digital Technology Co., widening the dragnet beyond Huawei to include world leaders in video surveillance.

The U.S. is deliberating whether to add Hikvision, Zhejiang Dahua Technology Co. and several unidentified others to a blacklist that bars them from U.S. components or software, people familiar with the matter said. The Trump administration is concerned about their role in helping Beijing repress minority Uighurs in China’s west, they said, asking not to be identified talking about private deliberations. There’s concern also that Hikvision’s or Dahua’s cameras, which come with facial recognition capabilities, could be employed in espionage, the people said.

Such a move would escalate tensions with China and raises questions about whether the U.S. is going after more of the country’s corporate champions. Trump’s administration last week barred Huawei Technologies Co. from American technology, a move that pummeled shares in U.S. chipmakers from Qualcomm Inc. to Intel Corp., and threatens to dampen global economic growth and disrupt the rollout of critical next-generation wireless networks.

Chinese offshore yuan erased earlier gains after Bloomberg’s report. Shares of Hikvision and Dahua plunged in Shenzhen after the New York Times first reported on the potential ban. Both companies have been accused by human rights groups of facilitating Beijing’s persecution of the Uighurs, a Muslim ethnic group, in the western region of Xinjiang. The Trump administration however has held off on taking action because of sensitive trade negotiations with China, the people said. Those talks have since stalled.

It’s unclear which other companies may join Huawei on the so-called Entities List, which prohibits the sale of American technology without a special license. Chinese firms such as Hikvision and Dahua are the world’s largest purveyors of surveillance hardware, along with smaller rival Yitu Technology. Others such as SenseTime Group Ltd. and Face++ parent Megvii specialize in image processing software and are less reliant on American components.

“We hope the company receives a fair and just treatment,” Hikvision’s secretary of the board, Huang Fanghong, said in a statement. Dahua representatives had no immediate comment. SenseTime declined to comment, while Megvii and Yitu didn’t respond to requests for comment.

The latest threat will elevate fears in Beijing that President Donald Trump’s ultimate goal is to contain China, triggering a cold war between the world’s biggest economies. In addition to a trade fight that’s rattled global markets, Washington has pressured allies and foes alike to avoid using Huawei for fifth-generation networks that will power everything from self-driving cars to robot surgery, forming the backbone of a modern economy.

More on the Latest Chinese Clampdown

Senator Marco Rubio of Florida and other senators sent a letter in April to Secretary of State Michael Pompeo and Commerce Secretary Wilbur Ross urging them to impose sanctions against officials and companies “complicit in gross violations of human rights” in Xinjiang. A United Nations assessment said tens of thousands to “upwards of 1 million” Uighurs have been detained.

Hikvision, Dahua and other companies have benefited handsomely from Chinese President Xi Jinping’s unprecedented push to keep tabs on the country’s 1.4 billion people. About 176 million video surveillance cameras monitored China’s streets, buildings and public spaces in 2016, versus 50 million in America, according to IHS Markit.

Hikvision — the industry leader — now sells its cameras around the world. Its devices use artificial intelligence, enabling them to conduct facial recognition on a vast scale. That’s helped it build a dominant position in a market that BIS Research says was worth $32 billion in 2017 and will grow 16% a year through 2023. Along with Dahua, it’s a constituent of the MSCI Asia Pacific Index and is among Shenzhen stocks most owned by overseas investors. 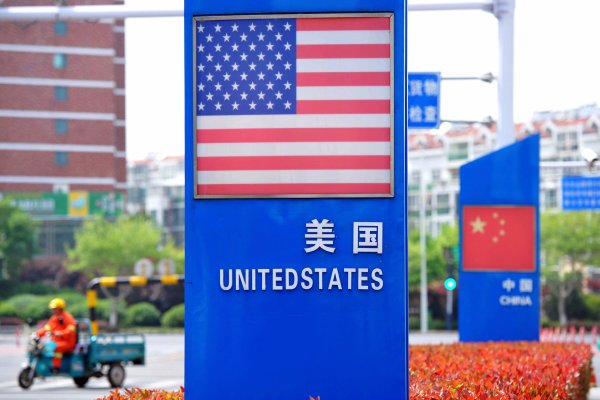