In the end, it wasn’t Jon Snow or Daenerys Targaryen who won the throne in Game of Thrones‘ series finale, but come-from-behind underdog Bran Stark.

Of course, King Bran will never sit on the actual Iron Throne, as it was destroyed by Drogon after the dragon discovered that Jon had murdered Daenerys. But that hasn’t stopped fans from pointing out a clue from a poster for Thrones‘ very first season that may have hinted at who would ultimately reign over the Seven Kingdoms — or rather, six now that the North has seceded under Sansa’s rule.

Leading up to the Game of Thrones series premiere on April 17, 2011, HBO released a promotional poster featuring Ned Stark sitting on the Iron Throne holding House Stark’s ancestral Valyrian steel sword Ice. But the detail that has captured many fans’ attention since Sunday’s finale is the raven perched on the throne next to Ned.

Since Bran ended up filling the roles of both king and Three-Eyed Raven, some viewers are speculating that this poster was the key to the show’s endgame all along. “Anyone else just notice the raven on Ned’s right from the season one poster???” wrote one Twitter user. “Raven + Ned Stark on the Iron Throne = Bran Stark. It was in front of us THE WHOLE TIME.”

This theory also squares with the poster’s slogan of, “You win or you die.” While Ned Stark was the first major character to die playing the game of thrones, Bran was ultimately the one to win.

Looks like the Three-Eyed Raven may have really known all. 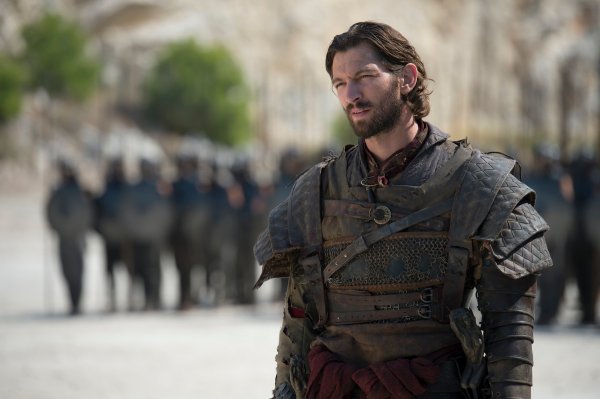 All the Unanswered Questions We Still Have About Game of Thrones
Next Up: Editor's Pick