A rioter tries to throw a litter bin at police on a street in Mongkok district of Hong Kong, Feb. 9, 2016.
Kin Cheung—AP
By Amy Gunia / Hong Kong

Two years after their quiet departure from Hong Kong, two political activists from the semiautonomous region of China have come forward to say that they are under refugee protection in Germany.

Ray Wong, 25, and Alan Li, 27, faced rioting charges for their roles in a protest that turned into a violent overnight clash with police in February 2016, but the pair jumped bail and fled to Germany in 2017, according to the New York Times. Germany granted the pair protection last May, they say, according to the Times.

Germany’s federal office for migration and refugees also confirmed to the Times in an email that it had granted two Hong Kongers refugee protection last year.

They are believed to be the first political activists from the city to be granted asylum by a foreign country. The revelation is likely to deal a blow to Hong Kong’s international reputation, at a time when political freedoms have been eroding in the city.

“This is a worrying sign, though not entirely surprising given recent trends in Hong Kong,” Kelley Loper, Director of the Centre for Comparative and Public Law at the University of Hong Kong, told TIME.

“Although Hong Kong still enjoys a certain amount of autonomy and is politically and legally distinct from the rest of China, recent developments could chip away at those guarantees and negatively affect Hong Kong’s international reputation,” Loper said.

Wong was the leader of Hong Kong Indigenous, an activist group that opposes Beijing’s encroachment on the city, and Li was a member. In 2016, hundreds of protesters clashed with police in the busy Mongkok district after authorities tried to stop unlicensed food vendors from operating, which is a Lunar New Year tradition in the city. It turned into an all-night riot, during which scores of people were injured and dozens were arrested. Beijing later denounced the protestors as “radical separatists.”

Other political activists in the city have been prosecuted for advocating for democracy.

Leaders of a 2014 pro-democracy movement dubbed the Umbrella Revolution were handed prison sentences late last month, and a student leader, Joshua Wong, was sent back to prison last week to finish his sentence for defying a court order to leave a protest site during the 2014 demonstrations.

Hong Kong, a former British colony which was returned to Chinese sovereignty in 1997, is supposed to operate under a “one country, two systems” model meant to ensure that it retains certain freedoms such as an independent judiciary. But concerns about the city’s rule of law have increased in recent years as Beijing has tightened its grip on the city.

A fierce debate continues in the city’s legislature over a proposed extradition law, which would allow people to be sent to the mainland to face trials under China’s opaque legal system, where arbitrary detentions, forced confessions, torture and closed criminal trials are commonplace according to rights groups.

In recent years, the city’s press freedom rankings have been on a precipitous slide, a senior foreign journalist was expelled for hosting a talk with a pro-independence political leader, and several booksellers offering content critical of the Communist Party have disappeared. 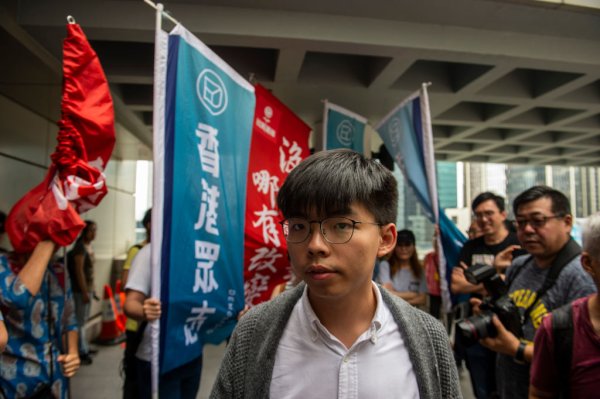