Niecy Nash Is the Star of Her Own Show. Now She’s Calling the Shots Too

The star of Claws on the sudsy thriller’s third season, her role in Ava DuVernay’s new miniseries about the Central Park Five and her first directing gig.

TIME: Claws, which is set in a nail salon, has sex, drugs, dance numbers and a mostly female cast decked out in high Florida glam. Is it as much fun to make as it is to watch?

Nash: It is—from interacting with the cast to figuring out costumes. On a show like Breaking Bad or The Sopranos, the things that the women [of Claws] are doing are reserved for men. But we have badass women doing badass things. Most of the time, it’s for a good reason.

You directed an episode of the new season, a first for you. How was that experience?

Amazing. First of all, who doesn’t love being able to tell people what to do? Second, I felt I was walking in with a gift and a purpose. The thing I loved most was being able to shift the atmosphere on set. I played music between setups: ’90s R&B, Stevie Wonder. And because we film in New Orleans, I brought in a second-line band and beignets. When I filmed on a Friday, it was mandatory that everybody wore their pajamas. I learned that I like to direct my actors in private but praise them in public.

You also have a role in Ava DuVernay’s Central Park Five miniseries When They See Us, which comes to Netflix on May 31. You’ve cited her as a hero of yours. Why do you find her so inspiring?

Ava was able to completely course-correct her life. She was a publicist and got off that train, got on another one and created a whole other life for herself. Anybody who can stand in their truth and bet on themselves, I’m going to see as a hero. You can change your life in the blink of an eye.

In When They See Us, you play Delores Wise, whose son Korey was one of five teenage boys of color who were wrongfully convicted in the case of a white woman who was raped and left for dead. How do you go about performing this real person’s pain?

With care. You have to pay attention to the scope of the life and not the one moment in time. I was happy to be able to speak with her before filming. You have to acknowledge that this is somebody’s life, and you have to be [aware of] what bringing up the past may cause them.

When you’re shooting such somber material, what is the atmosphere like on set?

I’ve never been on a set like this, that provided crisis counseling to those who needed it. It’s hard, being a mother in real life, to watch these children being dragged out of this courtroom and feel helpless. Having the real men who experienced this or their parents on set, too, you feel very responsible.

After raising three kids as a working actor, you’re finally an empty nester. How has that changed your life?

It makes me feel better about jobs out of town. That is one X factor in this industry that you cannot control. If a job shot in Vancouver or Atlanta or New Orleans and I was based in Los Angeles, it was challenging—because when my children were younger, I felt like I needed to be home. Now, I can go where the work is and feel all right.

You’ve been in Hollywood for about 25 years. In light of Time’s Up and the increasing visibility of people of color in front of and behind the camera, do you see the industry changing in the long term?

I do think it’s changing, and it still has a ways to go. It would be unfair of me to say, “I’m the black lead of a show, guys. We’re all good here.” It was a childhood dream, getting a star on the Walk of Fame [as Nash did in 2018]. But there are so many other deserving people who exist beyond the realms of black and white—who are putting in the work and deserve to shine. There are so many stories that still need to be told 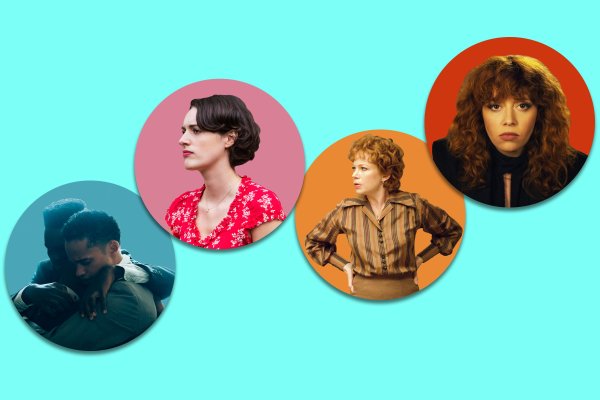 The Best TV Shows of the Year So Far
Next Up: Editor's Pick