Secretary of State Mike Pompeo’s claim that Iran and Al Qaeda are collaborating is at best an exaggeration that is not supported by any available information, U.S. intelligence officers and officials with the State and Defense Department tell TIME.

Pompeo made the claim about the terrorist organization during testimony before the Senate Foreign Relations Committee last month, at a time when tensions between the U.S. and Iran have risen.

“There is no doubt there is a connection between the Islamic Republic of Iran and al-Qaeda. Period. Full stop,” he said. “The factual question with respect to Iran’s connections to al Qaeda is very real. They have hosted al Qaeda. They have permitted al-Qaeda to transit their country.”

But U.S. officials say that he dramatically overstated the case.

“The Secretary has blown the level of collusion between Iran and a few of the remnants of al Qaeda way out of proportion,” says a senior U.S. official who follows developments in Iran closely. “There have been occasional marriages of convenience, but there is nothing in the intelligence to suggest that any of them has been consummated in any grand anti-American alliance.”

Two intelligence officials say that while it’s true that a handful of al Qaeda members, including one of Osama bin Laden’s sons, have been in Iran since shortly after the U.S. attacked their safe haven in Afghanistan in 2001, there is no evidence that Shiite Muslim Iran and the Sunni extremist group have carried out any joint operations against the U.S.

To the contrary, three officials noted, the Islamic State in Iraq and Syria, al Qaeda’s direct descendant in Syria and Iraq, took credit for a 2017 attack on Iran’s parliament building and the tomb of the Islamic Republic’s founder, the Ayatollah Ruhollah Khomeini, which according to Iran’s state media killed at least 12 people.

That attack may have been prompted by the fact that Lebanon’s Hezbollah and other Shiite militias backed by Iran’s Quds Force, the overseas arms of Tehran’s Islamic Revolutionary Guard Corps, have battled al Qaeda and ISIS in Syria and Iraq, said another U.S. official, who like the others requested anonymity because they are not authorized to speak publicly.

“There have been al Qaeda people in Iran since shortly after 9/11, occasionally under house arrest,” says Daniel Benjamin, who was the State Department’s top counterterrorism official during the Obama Administration and now director of the John Sloan Dickey Center for International Understanding at Dartmouth College in New Hampshire.

However, Benjamin tells TIME, Iran has not had an operational alliance with al Qaeda.

“The Iranians want to know what AQ is up to and they keep close tabs on them, but Iran’s current approach and one it’s maintained for many years has been to avoid anything that would provoke an American strike,” he says.

The most recent State Department Country Report on Iran’s support for terrorism, published last September, doesn’t pull any punches, saying: “Iran continued to provide weapons, training, and funding to Hamas and other Palestinian terrorist groups, including Palestine Islamic Jihad and the Popular Front for the Liberation of Palestine-General Command. These Palestinian terrorist groups have been behind a number of deadly attacks originating in Gaza and the West Bank, including attacks against Israeli civilians and Egyptian security forces in the Sinai Peninsula.”

But on connections between Tehran and al Qaeda, the report says only that: “Iran remained unwilling to bring to justice senior al-Qa’ida (AQ) members residing in Iran and has refused to publicly identify the members in its custody.” In addition, the clerical regime in Tehran has allowed the group to move money and fighters through Iran from Pakistan to South Asia and Syria “since at least 2009”.

However, the U.S. officials tell TIME, last summer or fall, after Pompeo became Secretary of State, language suddenly appeared referring to the few al Qaeda members as “AQ in Iran”, suggesting there was an operational cell, which the officials say was at least an exaggeration, if not an outright falsehood.

That assertion predictably has evoked memories of the George W. Bush Administration’s false claims that al Qaeda had links to Iraq, and even that bin Laden and Saddam Hussein — both Sunnis — might have cooperated in planning the Sept. 11, 2001, World Trade Center and Pentagon attacks. In that case, Bush Administration officials and Iraqi exiles distorted intelligence about a supposed Iraqi terrorist training facility and an Iraqi offer to bin Laden of safe haven in Iraq, which officials neglected to mention that bin Laden had rejected, saying Iraq’s objectives were not al Qaeda’s.

There is, the U.S. officials said, slightly more substance to Pompeo’s assertion than there was to the Bush Administration’s claims about al Qaeda and Iraq, despite the centuries-old hostility between Shiite Iran and its Sunni neighbors. The small number of senior members of bin Laden’s now scattered group who remain in Iran are there with the government’s permission, although some of them have been under virtual house arrest, says one of the officials.

The arrangement, say two of the officials, is a pragmatic one: It prevents al Qaeda or any group under its wing from attacking Iran and it provides Tehran some potential leverage in any new negotiations with the U.S., although Iranian President Hassan Rouhani this week said he’s not ready to talk.

“I can envision a moment when, as part of some negotiation, Iran might offer to hand over the al Qaeda types it’s been harboring in exchange for some concession on sanctions,” one U.S. diplomat tells TIME. “If you think about it, that’s kind of the opposite of what the Secretary has said.”

Now, these officials worry that the situation could spin out of control, especially after Iran this week announced that it is quadrupling it production of low-enriched uranium, which cannot be used for nuclear weapons, and on Sunday someone fired a Katyusha rocket that landed about a mile from the U.S. Embassy in Baghdad.

Even before Iran announced the increase in uranium enrichment, Trump reversed his comment that he hoped there would not be a war with Iran and echoed National Security Advisor John Bolton’s vague threats of military action against Iran, tweeting: “If Iran wants to fight, that will be the official end of Iran.”

Saudi Arabia, too, has been escalating its verbal attacks on its Shiite enemy, particularly in connection with the Islamic Republic’s support for Houthi rebels in Yemen, and the Kingdom is preparing to host a meeting of Sunni allies against Iran on May 30 in Mecca.

Pompeo and Acting Defense Secretary Patrick Shanahan sought on Tuesday to reassure lawmakers that the Administration is not trying to start a war with Iran. But reactions to their classified briefings remained divided along party lines, with Democrats saying they are unsure of the Administration’s intentions and Republicans saying its efforts to deter Iranian aggression are succeeding.

“I don’t think anyone wants another war in the Middle East,” one of the U.S officials said on Tuesday, “but then again, nobody wanted World War I either.” 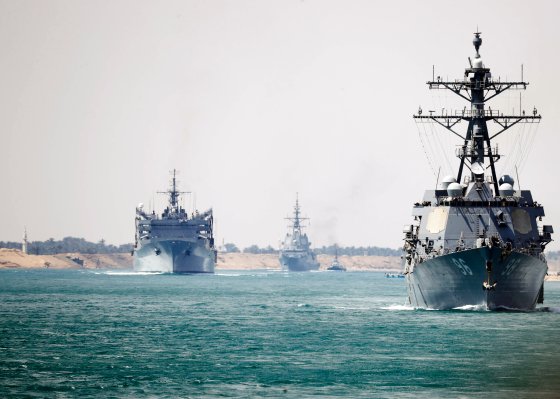